Today’s article in The Times reminds one of the recent debacle between Redhill and Gatwick Airport. Hundreds, if not thousands, missed their flights and onward rail connections. Its clear buses being used to replace trains are on the increase! The use of buses as rail replacement services has reached a ten year high reports say.

The Times on the increase of buses to replace trains
Why provide a railway when buses seem to be the preferred alternative? Does the railway want customers or not? Does it want to run trains? Yes? Well provide a fucking train service then!

Why is is that this country has to suffer the regular ignominy of buses instead of trains? Oh yes, its the loading gauge. Whaddya mean? Well we have a somewhat smaller profile than the the UIC (Berne Gauge) or larger used in Europe. In other words our trains and rail routes are smaller. But that’s no excuse. This is almost 2020 and we are still closing down railways just to adjust a bit of track or signalling. The maintenance culture on Britain’s railways is without a doubt totally crap.
In Europe they can run trains with track renewal occurring renewal simultaneously on adjacent tracks. They can squeeze trains past on just one track. Isn’t that what we were supposed to be doing perhaps sixty years ago? Britain invented the world’s railways and then what? Bustitution. Britain’s greatest non-export – no other country obviously wants it!
Bustitution is horrific especially when people work their lives around expected timetables – bustitution destroys people’s lives and smashes completely their holidays, booked conferences, work arrangements, business meetings, health appointments and family reunions. There are enormous social and economic costs too.
Over fifty years ago British Railways announced it had finally had an end to the ever present problem of rail engineering works. Its new Arki-Endon track laying machine meant engineers would never need to possess an entire railway when just one line could be worked and the other available tracks continued to accommodate train services. This was built specially by European engineers in Hanover to overcome the limitations of Britain’s loading gauge. The machine laid welded track and could also operate beneath overhead power lines.

The Arki-Endon tracklaying machine on demonstration May 1963
What’s happened in the fifty five years this new track laying machine was revealed to the UK? Our railways are still playing their favourite bustitution game! ‘Damn fishplate’s gone! No probs let’s grab a bus or two!’

Fishplates definitely gone from this once proud main line in London which formerly carried famous express trains. May 2018
It seems even organising this new fangled track laying machine must have been far too much trouble. In the late sixties when the Dawlish coastal line was blocked, it was decided to send some trains on the old Southern route via Okehampton and Tavistock (this is just after passenger services had ceased.) Several complained as they ended up in Plymouth miles from their homes. Clearly there was poor organisation but in typical time-honoured British railway fashion, good old BR threw its arms up in the air and said right we rip up the other tracks completely, there’ll be no alternative to worry about in future. Indeed in the short space of a few weeks there were no longer any tracks beyond Meldon!
Someone had the right idea when they converted the Cambridge-St Ives line into a dedicated busway! Why bother with railways when buses obviously do the job so much better? At one time the authorities wanted to convert the lines out of Marylebone into a dedicated busway. Why oh why did that never happen?
As the above picture shows London indeed has miles and miles of main line railway no longer doing any work. Perhaps a further worthy contender for conversion to busways? Why bother with trains?
Let’s face it its nothing to do with loading gauges. Its the British attitude of ‘is there snow? Oh my gawd let’s go and hide until the whole thing blows over!’ One wonders whether there’s a Channel Tunnel ship replacement service when the Chunnel closes for maintenance? Or if airlines say to their customers ‘we have a bit of a problem with the planes at the moment we’re going to send you via hot air balloon…. Five weeks in a balloon you say? You gotta be frigging joking!’
Yes Britain’s railways are a frigging joke. Look at the European railways. They’re thriving. Our railways have every single possible point taken out, every single possible piece of track decommissioned and removed. Terminus platforms too near the town centre? Simple answer – move the frigging station back a hundred yards or so and let the passengers walk the rest of the way! There’s no point in waste is there? Exactly. WHY are we even running trains? Bless dear old Beeching, he closed a few lines down here and there didn’t he? Obviously it wasn’t enough. He should have said ‘Just close the sodding lot! Buses can do better.’

Three months ago people going from Victoria to Gatwick were paying Gatwick Express fares just to be shoved onto short-formed, non-express, overcrowded trains. And worse, onto massively overcrowded buses that required a wait of two-three hours in freezing cold Redhill. The lines to Gatwick have four tracks they could have spared a couple of tracks for a rail service. Lots of people missed their flights – many were so bloody angry – and not without reason. 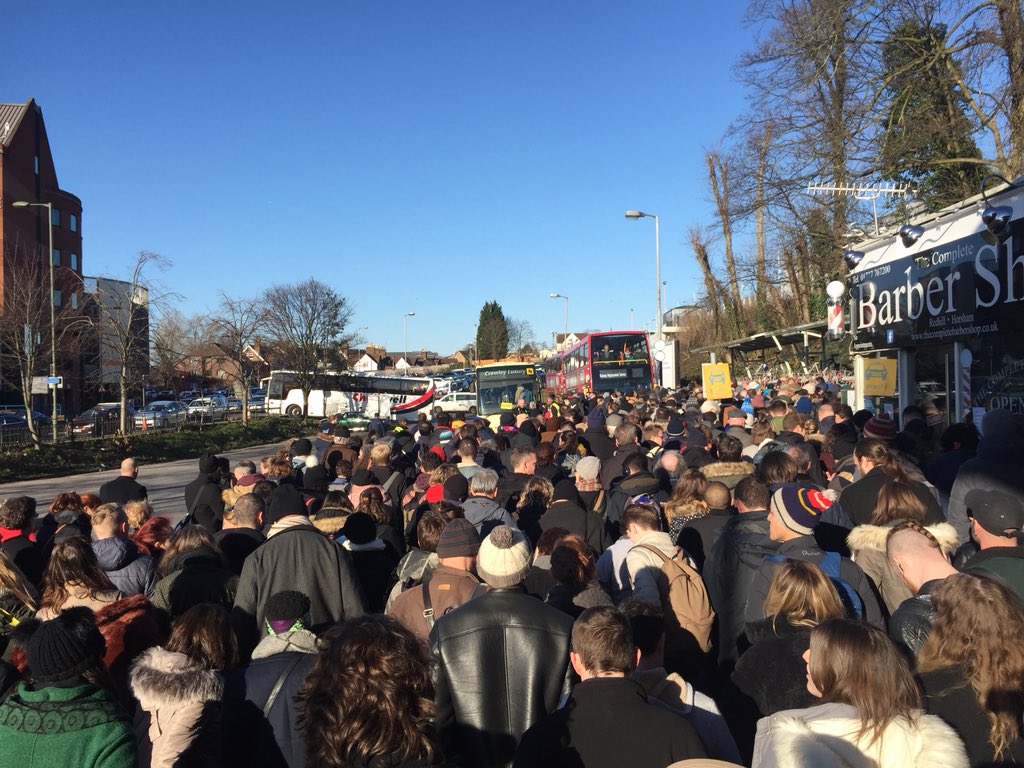 The Redhill bustitution chaos. February 25th 2018. Source: Twitter
Does bustitution really save the railways any money? Imagine all the compensation claims procured as a result of that Gatwick weekend? How many of these were honoured? If every single one had in fact been honoured (which I somehow doubt) it would show bustitution was extremely expensive and an unnecessary alternative.
As today’s article in The Times shows, bustitution is clearly on the increase! Its not going away. Its an abomination that’s clearly here to stay and no doubt there’s going to be many many more people damaged, hurt, offended, by the fact they expect a relaxing, sort of laid back, train journey, a clear and concise journey from A to B, and instead find themselves shoved onto some shitty bus that takes the best part of a day to work its way between two disconnected sets of railway line.

Network rail said its looking to the likelihood of a 24 hour railway and how that would possibly work. Without a doubt bustitution must never ever be considered part of this brave new vision. But dont let this worry you! The record of Britain’s railways is that there’s gotta be buses. Its the buses that ‘make’ the trains go! Whether its a 24 hour railway or the new Crossrail/Elizabeth Line, they WILL all want these fantastic bus replacement services at some point or other!