One of London’s latest tube stations to be touted as accessible! Its the 74th to be made such on the London Underground network. But is it really accessible? That’s a very good question….
I watched Geofftech’s new video on tube accessible stations where he introduced Buckhurst Hill as the 74th official step free tube station. Alas Geoff hasn’t seen the full set of problems behind the claims being made.
Originally this enhancement was due for completion in 2020. Due to the insistence of the local campaign groups TfL clearly brought it forward and whilst they must be applauded for making every effort to implement accessibility at an earlier date, its not even fully accessible. Firstly it does not provide clear and proper access to the station. 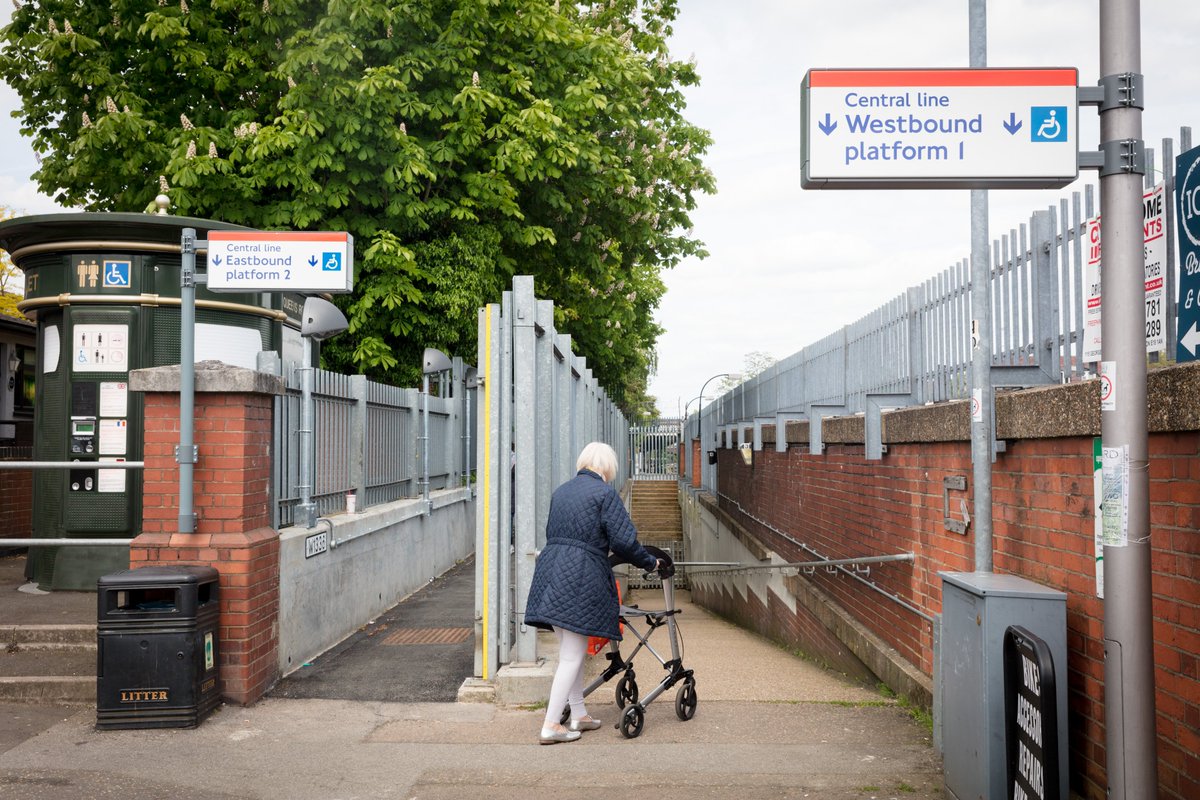 Official TfL picture showing the ‘new’ ramps. Source: Twitter
Secondly the main station itself isn’t accessible without the help of TfL staff. No staff means no access! There have been tweets since the new facility’s been open saying, “No step free access to the platforms due to staff shortage.” Clearly if one cannot use the single step into the station to access the eastbound platform and needs assistance from staff, and there’s none, its not accessible, especially if one is set down at the main station rather than Queens Road.
The other issue is due to the platforms, manual ramps need to be used to allow some to get on or off the trains. Again staff are needed for this. No staff means no access for some even if they do manage to get onto the platforms. Its not like the Circle, Hammersmith Lines where practically every platform in the central area is absolutely level with the train floor (even though many of the stations themselves aren’t accessible.)

Recent TfL tweets showing Buckhurst Hill station not accessible due to staff shortages.
It seems the station was always nominally accessible in part (eg the eastbound platform via a small step) but not between the two platforms. The work simply reinstated the old Lower Queens Road entrances, with certain enhancements to make access through here easier and to provide a route to the westbound platform which does not necessitate crossing the station’s footbridge.

The dire state of the closed ramps before renewal began. Source: Buckhurst Greens Blog
The work began in December 2017 and it was completed at the end of April 2018 with a view to opening by the 30th April 2018. Yet it wasn’t open for a few days, in fact on May 1st 2018, the Central Line tweeted the work would be completed by 2019! People were arriving at the newly reverted subways and finding the facility shuttered out of use.

TfL advance warning of the recent works
To be able to use this new facility one must be aware they should not arrive at the main station but at Queens Road instead. The other problem is, for some who arrive at the main station and can’t get in (because there is no staff for example) then the classic pavement route via Palmerston Road and over the railway can be easier than using the ramps. That is because for some the ramps, with those poorly located barriers, can be very difficult to negotiate. Its clearly a bit of catch 22 and there’s no signage (besides local knowledge) to say which is the better route. This would of course change if the ramps were far better than they currently are and staff didn’t have to be relied upon.
The improved access certainly benefits locals by cutting distances taken to traverse the areas to the east and west of the station. However it’s said by Buckhurst Hill Residents’ Society this new route is really more for abled people (plus a fair cross section of PRM’s may I add, not all though) in the event they agree the scheme is not fully compliant with the disability regulations.

Pics of the old state of the ramps and passageways. Note barriers across ramps.Source: Buckhurst Hill Residents
Other problems with the subway include the quality of the surfaces, the gradients, and the fact the handrails along the sides of the ramps are rendered useless by the placement of barriers across the ramp itself. These, designed to stop joyriders venturing down here, are narrow and cause a major obstacle to say, those using wheelchairs because its like a chicane, except its that six times in all an extremely sharp turn needs to be negotiated within each ramp.
The local greens claimed it would solve ‘transport apartheid’ and even had the Green Party’s co-leader Jonathan Bartley present a glowing video on what was being done here. Whilst it is certainly an improvement there are still considerable obstacles and thus it cannot be said to assist fully disabled people adequately.
The biggest issue here perhaps is the lower ramp sections (the bits with the barriers and useless handrails) and the subway under the tracks are not owned by TfL/LUL but in fact come under Epping Forest. It seems its up to the council to fully implement the accessibility that’s required according to the law. Certainly TfL have improved their side of things however Epping hasn’t. Until that can be done perhaps TfL shouldn’t be claiming its a fully accessible station!

One thought on “Buckhurst Hill station – accessible or not?”