Its 150 years exactly since the Victoria Embankment opened to the public. The date in question was Thursday 30th June 1868 and the ceremony took place at Temple Stairs. The main official opening itself did not take place for another two years however. For the first time ever in July 1868 the public were able to walk through from Blackfriars to Westminster along the new riverside the new piers en route came into use. The subway beneath the surface of the walkway and the sewers below all this were too completed at the time.

How the river looked before the Thames Embankment was built. Source: Wikipedia. Link
Another important event that took place on this day was the opening of the Abbey Mills works, to which the new sewers flowed. Boats were on hand to take people from Temple pier to Abbey Mills to view Bazalgette’s new pumping station. Curiously one wonders how this would have worked as it would have involved a trip on the tidal Bow Creek, Channelsea River and Abbey Creek. Examination of the situation afforded on that day appears to show the tides would have been favourable in the afternoon and early evening, so it is possible, even though it is not reported anywhere, that these special boat services operated in the afternoon only.

One of the few drawings to depict the opening of the Embankment 30 July 1868
There are a number of photographs of the construction of the Thames Embankment however these are directly related to the building of the Metropolitan District Line and apparently the only photographs in existence. No photographs it seems exist of this first major section of the Thames Embankment to be opened nor of the Royal opening in July 1870 and I assume the Metropolitan District Railway had no interest in sending its official photographer along to these events. 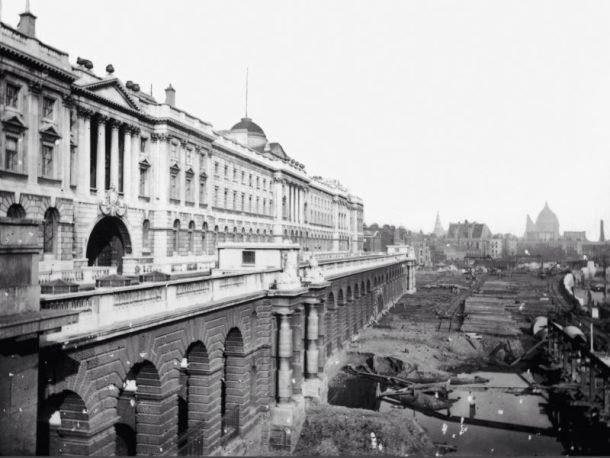 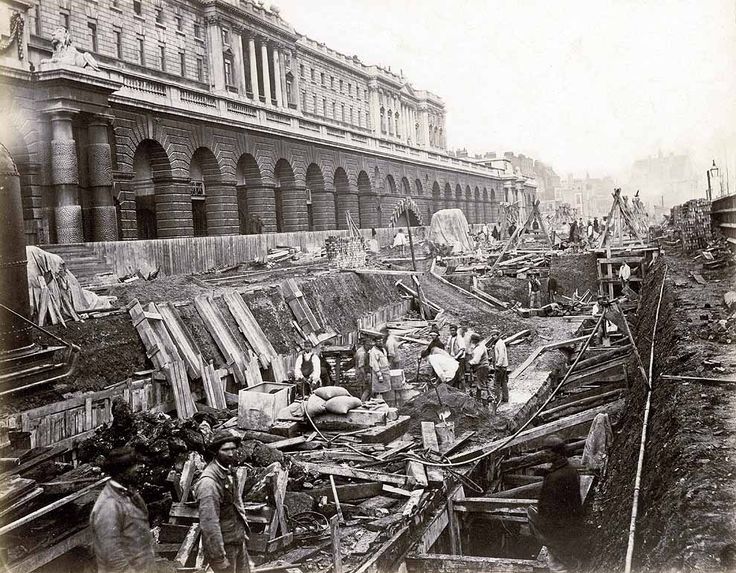 Another view with the trench for the District Line underway, probably early 1868. Source: Pinterest
The royal opening by the then Princess of Wales and Princess Louise, took place in July 1870. Queen Victoria was meant to officiate however she was indisposed. At this time the works were still not completely finished though pedestrians and traffic could now use the entire route throughout. There were other ceremonies during the different stages of construction and completion of the works, including the laying of a number of foundation stones.

The completed pedestrian walkway at right with the District Line still under construction, 1868
The retrenchment of the River Thames had long been proposed with Sir Christopher Wren himself putting forward the earliest scheme on record for a new road alongside the river. This and many others that predated the 1860s were never carried out. Some lovely schemes including aqueducts, locks, docks and elevated railways were drawn up. They were expensive though. It was the health problems that London faced, especially the cholera epidemic, which prompted an urgency to do something. It was exceedingly expensive and involved new riverside embankments, an underground railway and a gigantic sewer distribution system. Of course the person behind the plans was no other than Joseph Bazalgette – the engineer responsible for solving many of London’s problems of the time.

The completed Thames Embankment in the 1870s
Bazalgette too was responsible for the new underground railway that would run beneath the surface of his new Thames Embankment. This part of the project proved to be the most difficult as the reclaimed land had to be drained fully, backfilled, compounded and then the railway’s tunnels built by cut and cover. Between 1868 and 1870 people walking along the new Embankment were able to observe the building of the new underground railway at close hand. The new roadway above was not completed until early July 1870 and some other parts were not finished until 1872.