On this very day, 5th December, a hundred and twenty years ago the very first test trains ran on the world’s one and only true monorail system. This was the Schwebebahn suspension railway through the twin cities of Elberfeld and Barmen in the Ruhr area of Germany. The two cities eventually merged to become known as the modern city of Wuppertal. For most people the name Wuppertal of course evokes the famous monorail itself!
Construction of the monorail began in early 1989 and sufficient track had been built by December of that year to permit the line’s very first trial. On 24 October 1900, Emperor Wilhelm II took a trial ride on one of the new trains. This historic train is the preserved Kaiserwagen. The official opening took place on 1st March 1901 between Zoo Stadion and Kluse. The sections to Vohwinkel and Oberbarmen were opened in May 1901 and June 1903 respectively.
Note: This post has been updated with a brief report and pictures on the recent accident at the Schwebebahn.

My pic of one of the late fifties generation trains approaching Wuppertal Hauptbanhof.
This post is a short tribute to the Schwebebahn and consists of some archives and photographs I have of the famous monorail system. I rode the Schwebebahn for the first time in the late sixties. In those days it wasn’t even a famous line like it is today. I had read about it in a railway book around 1965 and it wasn’t long after that we happened to visit Germany, so I pestered my parents to take me to Wuppertal. They wondered why their young kid wanted to visit a practically unheard of place. They soon found out why – and both enormously enjoyed riding the Schwebebahn! As I got older I made several visits of my own to Wuppertal.

One of my pics, taken fifty years ago, of the old Schwebebahn terminus at Vohwinkel – it still had elements of the 1903 station!
Here’s a comparable Google Streets view of the present Vohwinkel terminus.
In those days the line had just 18 stations instead of the original twenty thus the trip from Vohwinkel and Oberbarmen was around 26 minutes, unlike today’s 30 minute journey time. Both Ohligsmühle (1982) and Kluse (1999) are new stations which replaced those bombed in WW2.

Sixties English language leaflet!
The biggest change I observed on the Schwebebahn was the Kaiserstraße and Sonnbornerstraße – complete with historic houses and shops almost all the way down from Vohwinkel to the Wupper river. On later visits I found this splendid street section had been sadly ruined by the new Bundesautobahn 46 which cut through the area just west of Sonnborn station.
This YouTube video shows Sonnborn as it was in the sixties and the subsequent demolitions to make way for the new autobahn.

1971 Schwebebahn timetable and fares leaflet. These were the days when the city still had its trams!
The location shown in the above picture is the famous Alter Markt station. It was originally called Rathausbrücke.

Werther Brücke near Oberbarmen – One of the original art noveau stops still in use – voted the most popular of all 20 stations! (Pic: Mbdortmund from Wikipedia)
In terms of station renamings even though the eastern terminal is known as Oberbarmen, I certainly remember it as Berliner Platz whilst the central main stop was Döppersberg (also known as Wuppertal Elberfeld and now Wuppertal Hauptbahnhof.)

1971. The line’s 70th anniversary. That year I got this huge anniversary poster from the information bureau at Hauptbahnhof. It unfolds to about 5ft by 1ft 6ins.
You Tube has this great video from the front of one of the line’s trains in the early 1900s, showing much of the route between Bruch and Kluse.
The line now has its Generation 15 trains with enhanced stabilisation and other hi tech features. 117 years after it first opened the monorail still gives sterling service to the city of Wuppertal.
A great video on the line, its trains, stations, history, technology etc – from Wuppertaler Stadtwerke GmbH.
Schwebebahn Wuppertal English pages.
====================================================
Schwebebahn Accident November 2018
Ironically the Schwebebahn has suffered an accident and is out of use for a few weeks. Part of the structure, a 346 metre section of power rail fell, part of it onto a car crossing the Siegfriedstraße bridge just east of Zoo station two weeks ago. The monorail was closed with immediate effect for investigators to find out why – and to make sure there are no other sections that could pose a risk to the public. A spokesperson for Wuppertaler Stadtwerke (WSW) said the cause had to be investigated and to make sure it doesn’t happen again. 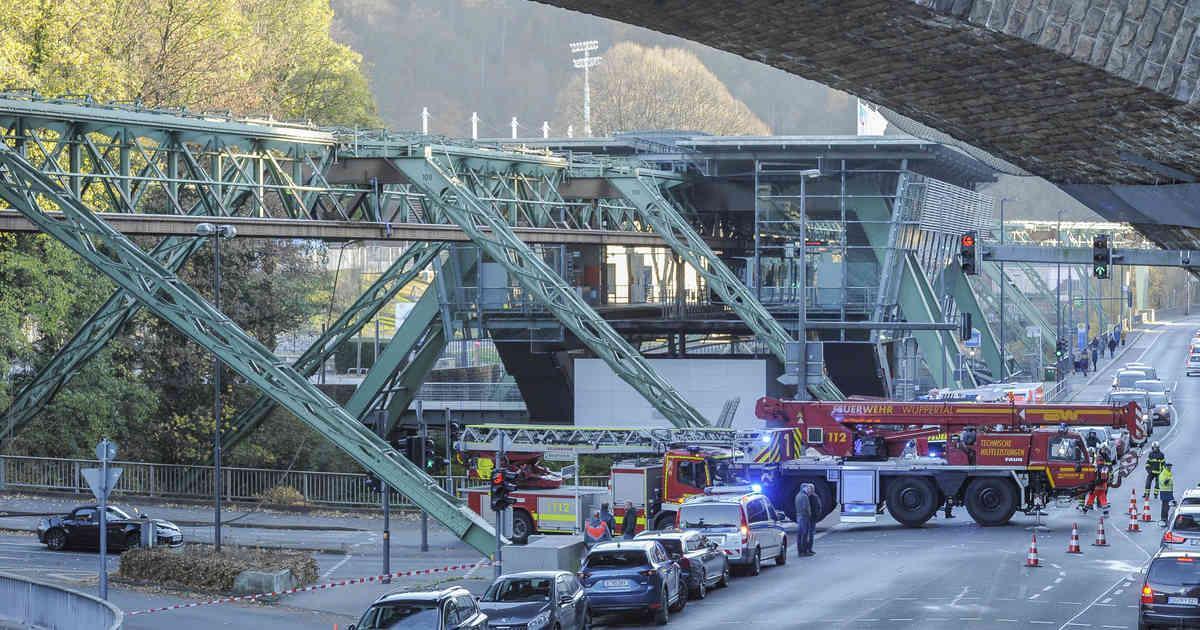 Zoo Stadion/Station with the car at left which had the monorail’s power supply rail fall on it. Source: Twitter
The section of power rail fell from Zoo Stadion as far as the Bayer Works, this is through a total of thirteen ‘A’ supports over the river. The graphic below shows the section affected. Parts of the power rail were found in the River Wupper.

Graphic showing the incident area on the Schwebebahn. This is from a initial public inquiry at Wuppertal. Source: You Tube.
The driver of the car in question fortunately escaped injury as the rail fell onto the rear of the vehicle. 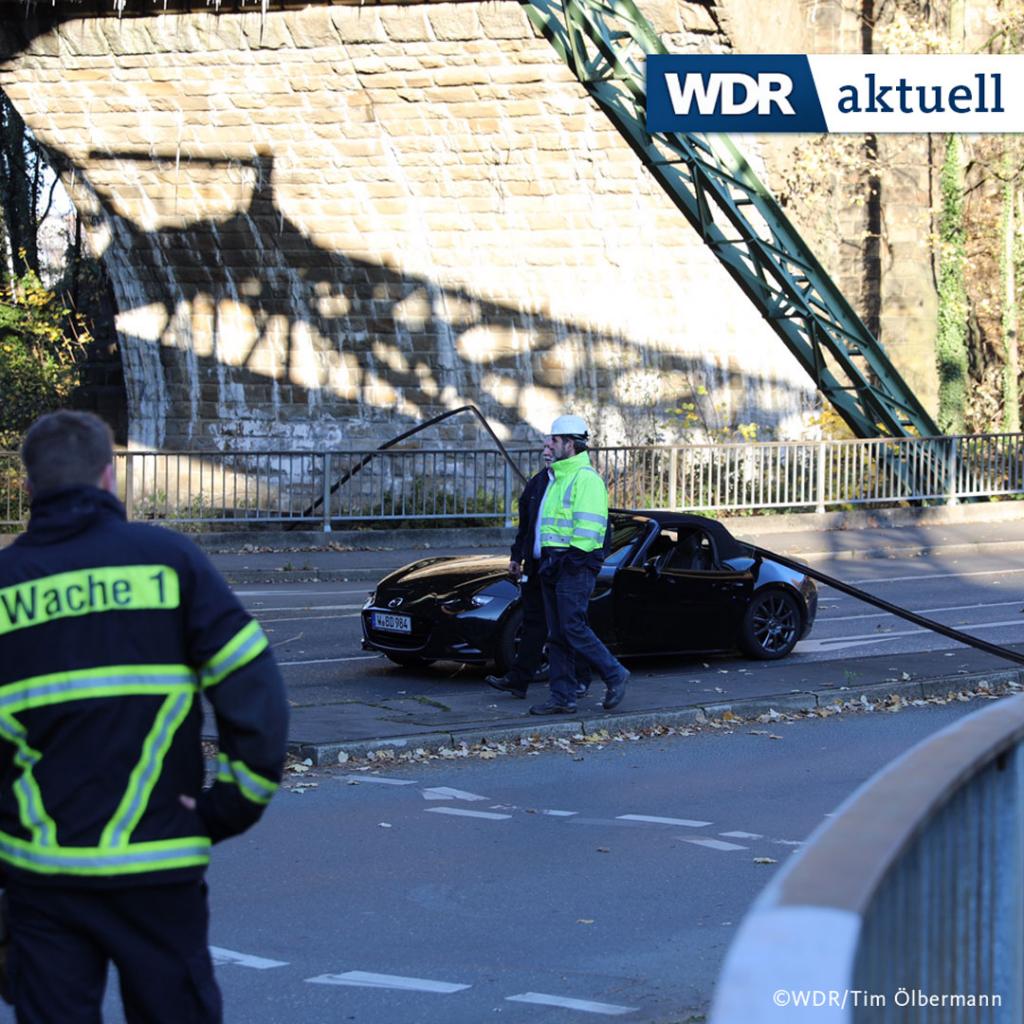 The car – with the power rail on top of it – at Siegfriedstraße bridge, Wuppertal. Source: Twitter. 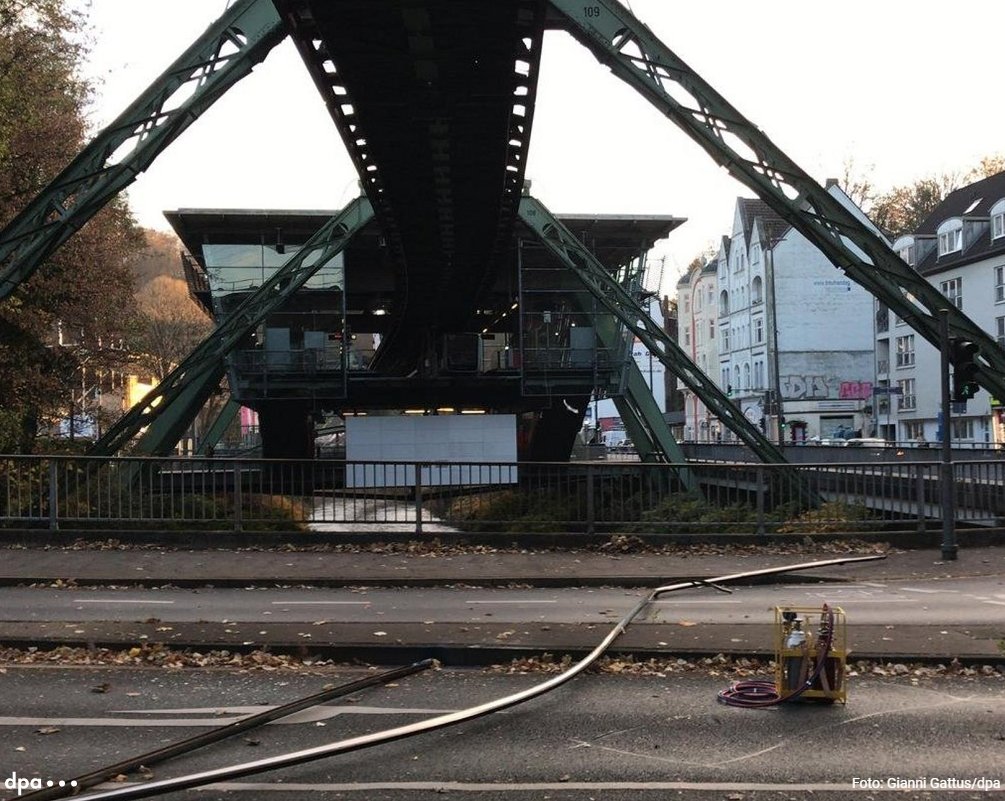 The fallen power rail. This normally sits on the underside of the superstructure and trains use miniature pantographs to collect the power. Source: Twitter.
According to Welt its not the first time this has happened. Welt claims there is a maintenance regime lacking at WSW and cite a similar failure involving the trains’ power rail which happened five years ago. (See picture below.)
Ironically Dortmund 24 a local news site, had tweeted two days before the accident itself declaring “Who wants to buy a special memory from #Wuppertal?” This involved the sale of one of the older Schwebebahn railcars – what’s so ironic is that Dortmund 24 unintentionally used a picture of the previous incident in 2013 when a substantial section of power rail fell on one of the trains! 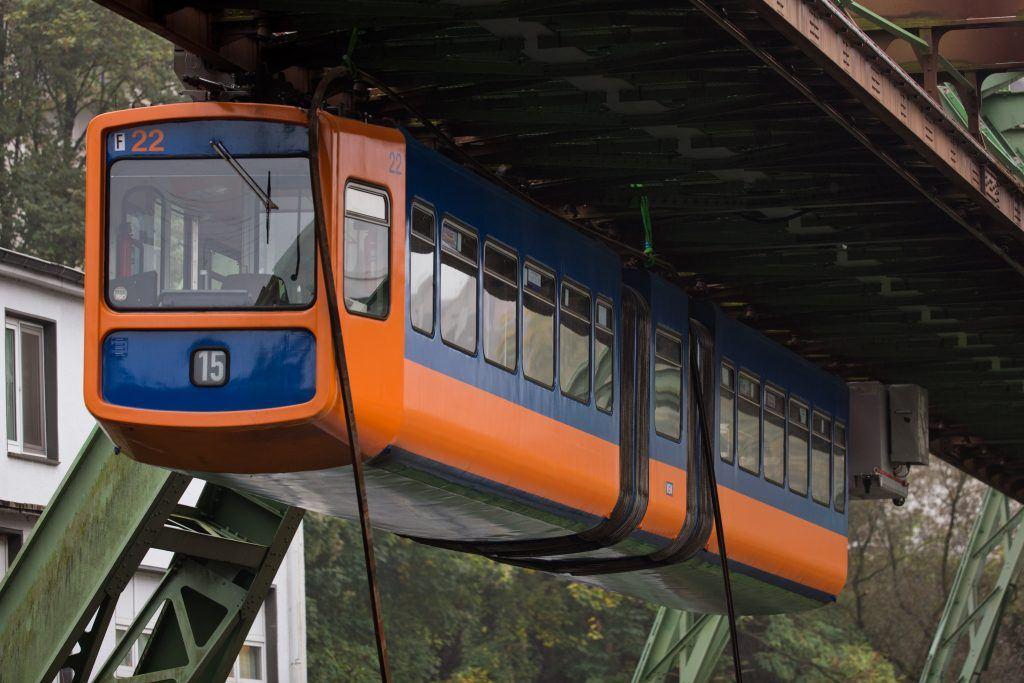 Tweet from Dortmund 24 advertises old Schwebebahn train for sale – this is actually a pic of the 2013 incident! Source: Twitter.