This is quite a bespoke subject as pictures of any special liveried Eurostars are quite rare, there haven’t been that many. The best known was of course the Da Vinci train which ran from London to Cannes non-stop on 17th May 2006, setting a world record for the longest non-stop international train journey.

This was probably the most well known (and the most photographed) of the special livery Eurostars. The units employed for Da Vinci were 3209/10 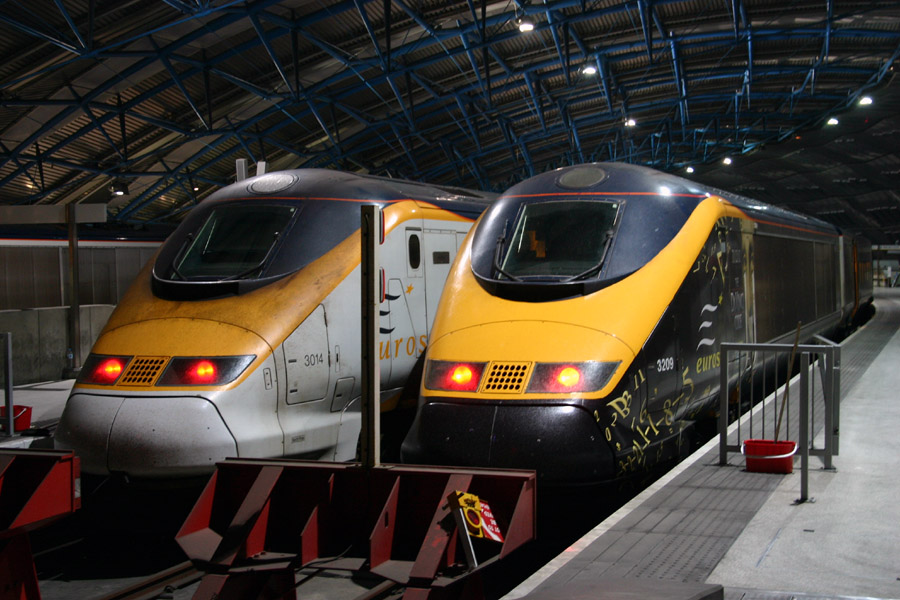 The train at Waterloo the day after its record breaking run. Source: Flickr

The Da Vinci Code train was refurbished and continues to be in service as a ‘E300.’

One thing is evident from these pictures as we will see. Some of the special schemes didn’t have their power cars adorned. Clearly that added a lot of cost to the total job and only the more important ones (Da Vinci, General de Gaulle, Yellow Submarine etc) came with full special liveried power cars.

Pics of this are rare… however its known it took two weeks to print all the decals and six whole days to fix them to the train! Although it was mostly yellow Submarine stuff some of the images (eg at Shutterstock) do show Sgt Pepper’s Lonely Hearts Club Band also had a showing on the train’s special livery.

Paul, Ringo, George and John depicted on the side of the Eurostar train. Source: Twitter

Here’s the train near Factory Junction heading away from Waterloo towards Brixton in 1999. Source: Twitter

The artwork is the result of four months of hard work by Apple Corp’s art director, 26-year-old Fiona Andreanelli…. ‘We wanted each carriage to have not only a different design, but to tell a different part of the Yellow Submarine story,’ explained Fiona. ‘Nobody has ever run 1,200 feet of movie designs down the sides of a train before. It was a tough order and I’m chuffed with the results.’ Many passengers had booked their tickets without realising the train was being used to promote the re-release of the Yellow Submarine. Source: BBC News

What is yellow and powerful and advances quickly under the sea? Source: Twitter

Remember! Yesterday was the Yellow Submarine, the famous yellow submarine of the Beatles. Source: Twitter

Hornby are releasing a OO Yellow Submarine Eurostar set for early summer! The pictures below show what the set will look like and the various sets/individual pairs of coaches that will be on sale.

The picture shows the special boxed set with oval of track and siding. Hornby says its DCC ready. If anyone wants to pre-order direct from Hornby they can do so here. Most other model dealers will of course also be doing their own pre-orders. It looks a great reproduction of the real thing and it’ll be a real collectors’ item! (Note: Hornby changed the images on their page thus archived images have been used here.)

I had written prior to the 6th January that the Yellow Submarine Eurostar had its power cars in a plain livery whilst the carriages were specially decorated. TBH I have so far not seen photographs of specially decorated power cars! Even the launch photographs show plain power cars! Thus when I saw the new Hornby models the other day I thought my reasoning must have been wrong and deleted that text. Since this I have been checking and have not found an example showing the power cars were indeed decorated in the way they are on the Hornby OO gauge models.

The question is, does the new Hornby OO gauge model represent a train that never existed in the form depicted? One wonders! Below are some pics showing how the power cars actually looked…

On Flickr this is power car 3005 (one of the two dedicated to the Yellow Submarine set) with yes plain livery!

On the Brixton Lines heading through Wandsworth Road on 8 September 1999. Source: Twitter

This one was from 2000 to launch the new film based on the earlier 101 Dalmatians film. It was both a French and a British initiative, and that’s why we have the title in French as well as English. 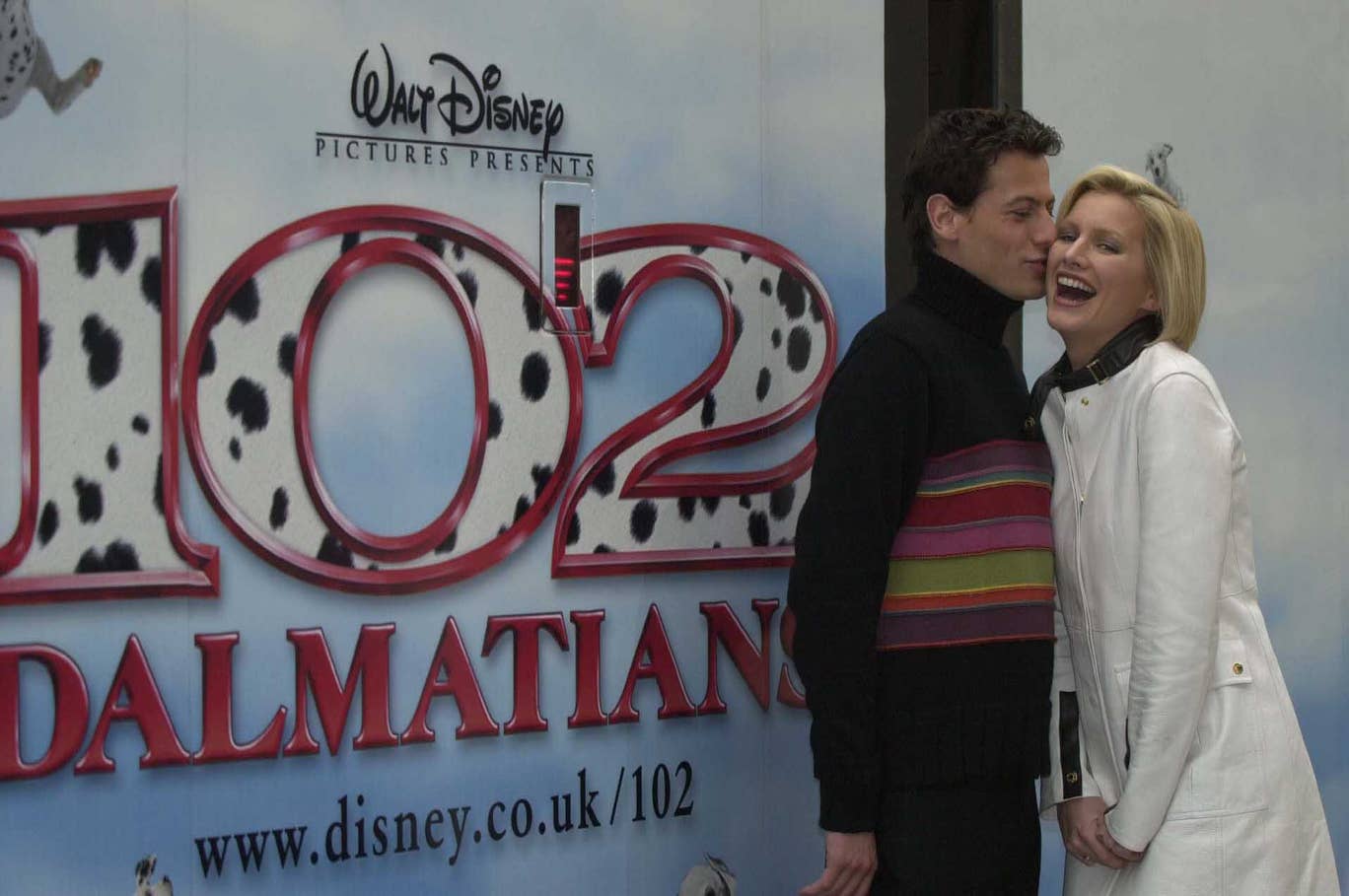 Ioan Gruffudd and Alice Evans at the launch of the special train. Source: Standard

I had thought I would not be able to show a photo with the train’s English title, however the Standard came to the rescue with its Eurostar 25th Anniversary photos and there was one example in that set. Here are some links to others: Shutterstock and another from Shutterstock.

This wasnt a fully decorated train (like the next one the Fete ‘Europe) however it was quite adorned with decals and flags and and messages to celebrate the 100th anniversary of the Anglo-French agreements.

This wasnt just any normal Eurostar rather it too was the Eurostar that set the record breaking run on HS1 a few months earlier.

The Queen named the train Entente Cordiale at Waterloo International before making her way to Paris. The naming ceremony can be seen on this Youtube video.

The train leaves Waterloo with the Queen aboard en route to Paris for the celebrations. Source: Twitter

On the French side this Youtube video shows the train’s arrival at Gare du Nord (note the flags and messages on the front of the train.) The Queen is received by dignitaries at the station and then goes on a tour of Paris.

The front of the train. Source: Andrews Transport Blog

This train was actually a North of London set and it eventually became a SNCF Eurostar. Records say its currently stored at Ambérieu.

Yikes! A real Eurostar on the Thames. This was stunt specially created for the 10th anniversary of Eurostar’s services.

It is said this event was used to cover bad news that had just been made known at the time – the cessation of Waterloo as a Eurostar terminus. Previously Eurostar had said both Waterloo and St. Pancras would be served by its trains.

After conducting extensive research, we have concluded that the benefits of moving the whole of Eurostar’s operation to St Pancras International substantially outweigh the need to operate a handful of services from Waterloo. This move will bring many new passengers for Eurostar from other parts of London and south-east England, the Midlands and Yorkshire and, additionally, benefit domestic commuters using Waterloo. Source: London SE1 News

Eurostar has been serving Euro Disney since 1996. However there was also a special Eurostar Disney train – it was launched in the first week of March 2004 – picures of this are exceedingly rare….

That wasnt the real Disney Eurostar by the way! The actual March 2004 event was a tie-in with the relaunch of the Disney brand, thus in a way the special Eurostar train was too a relaunch of those services that had been running since 1996.

This one special Eurostar, launched 6th March 2004, proved to be very hard in terms of sourcing pictures! I had begun to think it didn’t even exist and was just a figment of my imagination! I spent ages trying to find some examples…

There seems to be just a handful of pictures of the actual Disney train itself. First here’s one picture from official photograph agencies here and another (same pic different provider) take during the train’s launch on 6th March 2004.

The following two images are from Smugmug:

Another view of the Disneyland Eurostar at Waterloo 26th June 2004. Source: Smugmug

This wasn’t a full livery just partial! There have been many Fete l’ Europes – however this one was 2006.

An incredible rarity in terms of pictures! Just one other here.

This again was was a work from the French side of Eurostar to celebrate June 18th 1940 – the anniversary of the call for a France free from the Nazis. The title of the train was actually L’Appel du 18 Juin 70deme Anniversaire – an important event in which General de Gaulle participated during his residency in London. Its for that reason the celebrations began in London and then moved on to France with the President of France Nicholas Sarkozy present on the train. 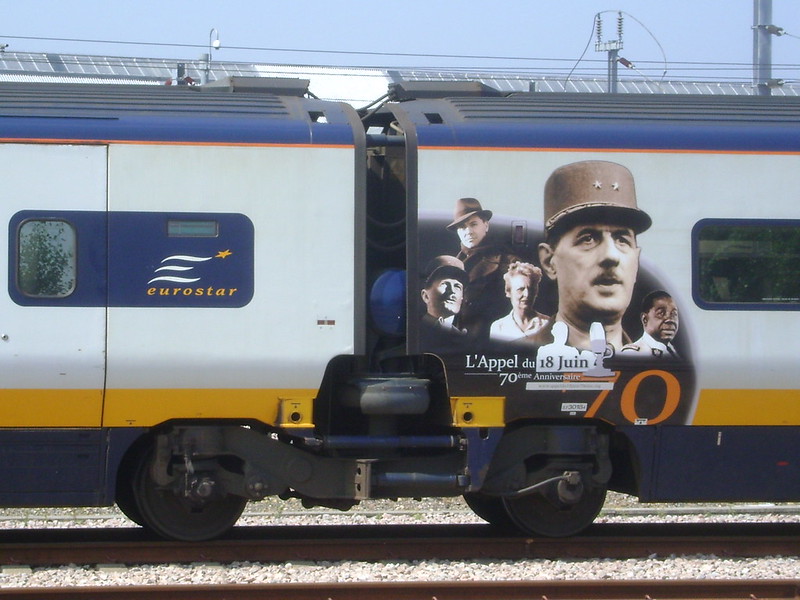 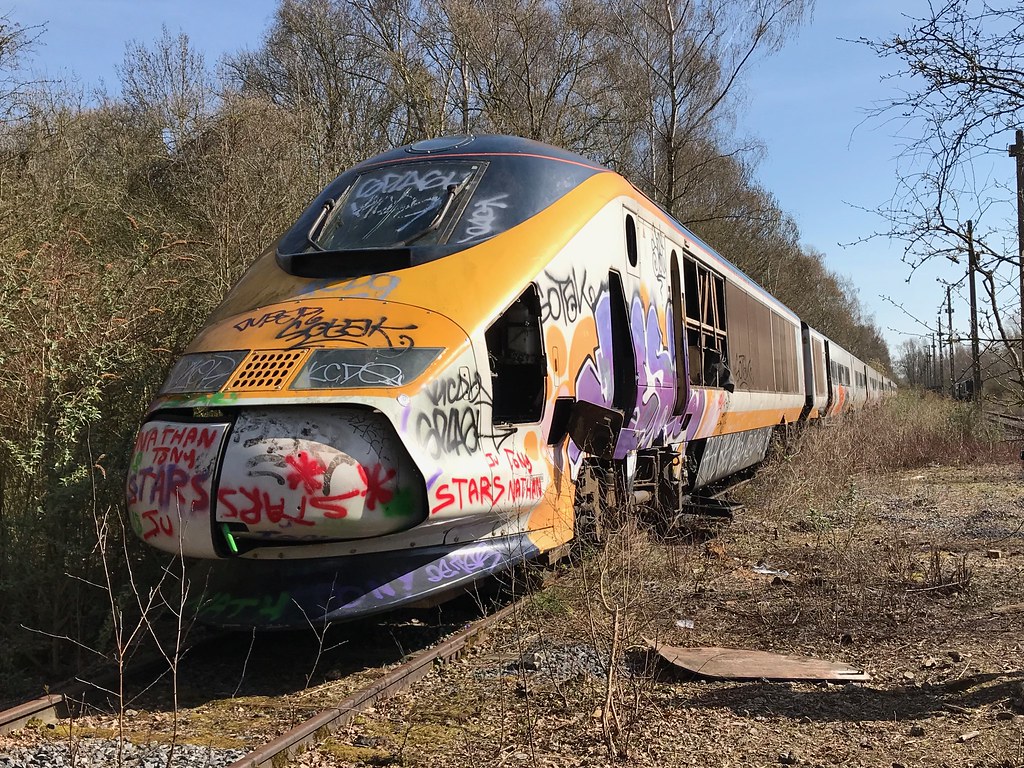 3018 was last seen in a derelict condition awaiting scrapping at Valcenciennes. Source: Flickr

All the Eurostars received 2012 Olympics branding on the power cars. It wasn’t really a significant thing, just the 2012 logo and the words ‘2012 provider’ because Eurostar had become one of the event’s sponsors.

A pair of Eurostars at St. Pancras with the London 2012 branding. Source: Oxford Prospect

Not really that important however the whole E320s initially were going to have a light coloured livery as the mock up train showed. I don’t know why it was changed, possibly it was experience with the 373s, which could get quite dirty looking, showed the company a darker livery would be better. As experience shows its just the front cars that received the all-blue, the remainder of the E320 carriages did get this newer look.

The prototype E320 in Kensington Gardens during 2010. Source: Wikipedia

However, pictures of E320s show the do get very dirty so really its not much difference, except the dirt is more visible early on a lighter livery!

These are some other Class 373’s on high speed duties with a different look – but not as a Eurostar service.

Early form of the SNCF livery seen at Gare du Nord 29th January 2006. This was one of the units that saw service with GNER between London, Leeds and York. Source: Train Testing

This SNCF Eurostar is unusual in two ways. Its in the original Eurostar livery rather than a special SNCF livery. Its also the Entente Cordiale and its name plate can just be seen on the cab’s side. Seen at Gare du Nord in April 2009. Source: Wikipedia

A number of the SNCF sets were in the original Eurostar livery and it seems just a handful were in the special French livery. 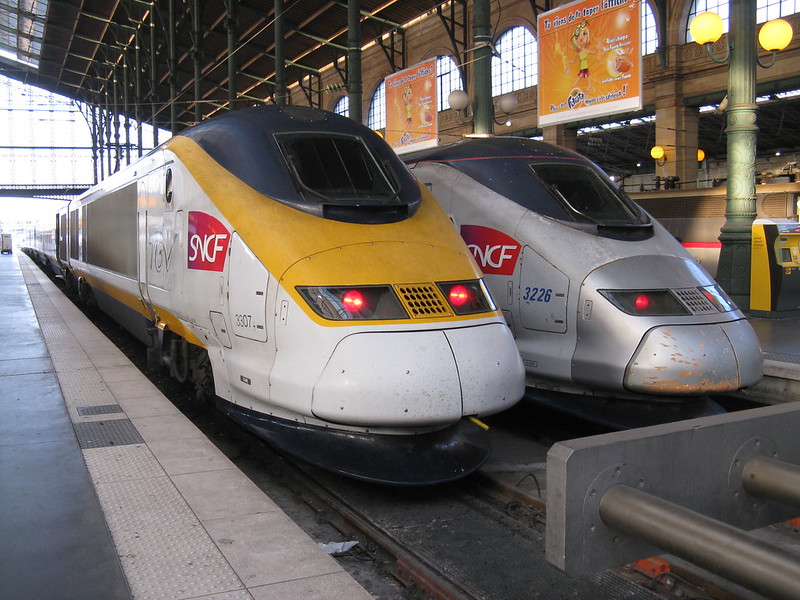 A special low cost service between Paris and Brussels using a Eurostar 373 set in a new livery. On a few occasions (for example see this tweet) a new Eurostar E320 unit has used in place of the one Izy 373!

The Izy set at St. Pancras! Seems it might have been on a positioning move en route to France, as it was painted in the UK. Source: Twitter

The Izy at St. Pancras on 14th October 2018. Its livery wasnt fully complete – some decals to be put on in France obviously. Source: Twitter

Detail of the section denoting the fact Izy is managed by Thalys. Source: Twitter

Current & exs at Brussels. 3213 is on an Izy service to Paris and 4031 Eurostar to Amsterdam. Source: Twitter

Some may notice I have not included the GNER Eurostars. These deserve a page on their own – they were not in any sense a high speed service as are the others on this page.

I also find that even though both Virgin and GNER wanted through trains to the continent using 373’s, it was said these trains (in their respective liveries) would have not been accepted in France.

Most of these regional Eurostars now languish unused in sidings here at Ambronay in southern France – either in plain Eurostar or SNCF Eurostar livery.

The National College Eurostars (#Brumstar and #Donnystar) are not included either since those liveries ironically wont have been on the high speed lines. The fastest these would have travelled is perhaps 60 miles per hour on the back of a low-loader!