CDRJC no.5 at Victoria Road. Source: Twitter (Note: As of May 2020 the account ‘RailwayanaUK’ has been suspended/deleted thus an archived image is used here.)

Raphoe in its final years. Note how the tracks have been rationalised. Source: Facebook

This is Letterkenny station (Lough Swilly railway.) An interesting view because most of the carriages on this train are from the CDRJC. The excursion went from Strabane to Burtonport. This would have been sometime in the late 1930s as the Burtonport line closed in 1940. Picture is from Edward Patterson’s Lough Swilly Railway. 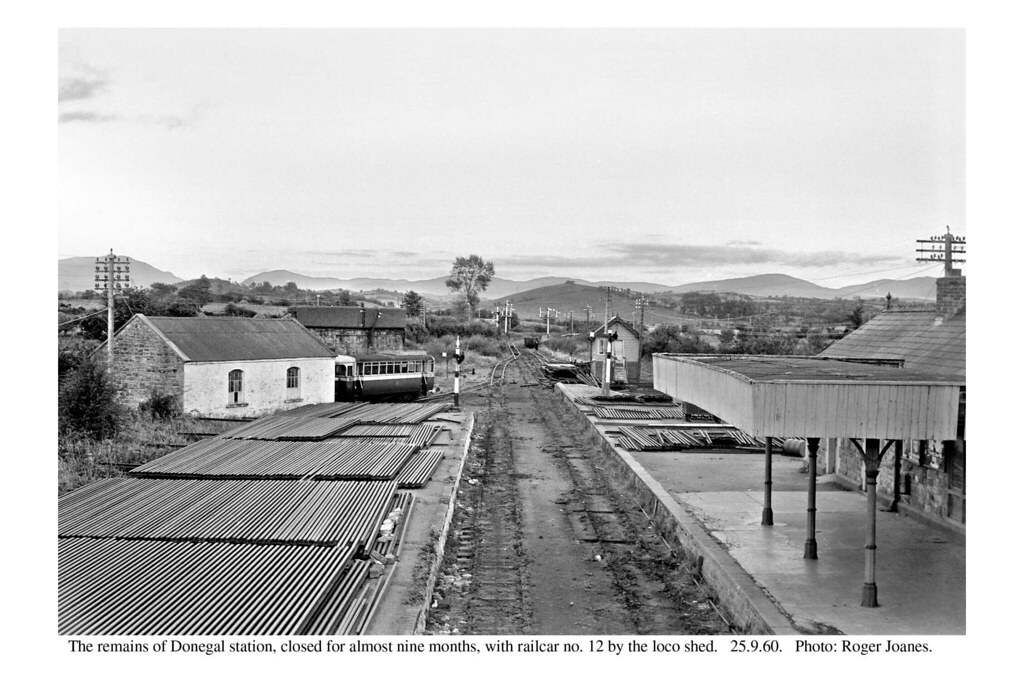 Donegal Town station after closure – a fair amount of track is lifted and stored on the platforms. September 1960. Source: Flickr 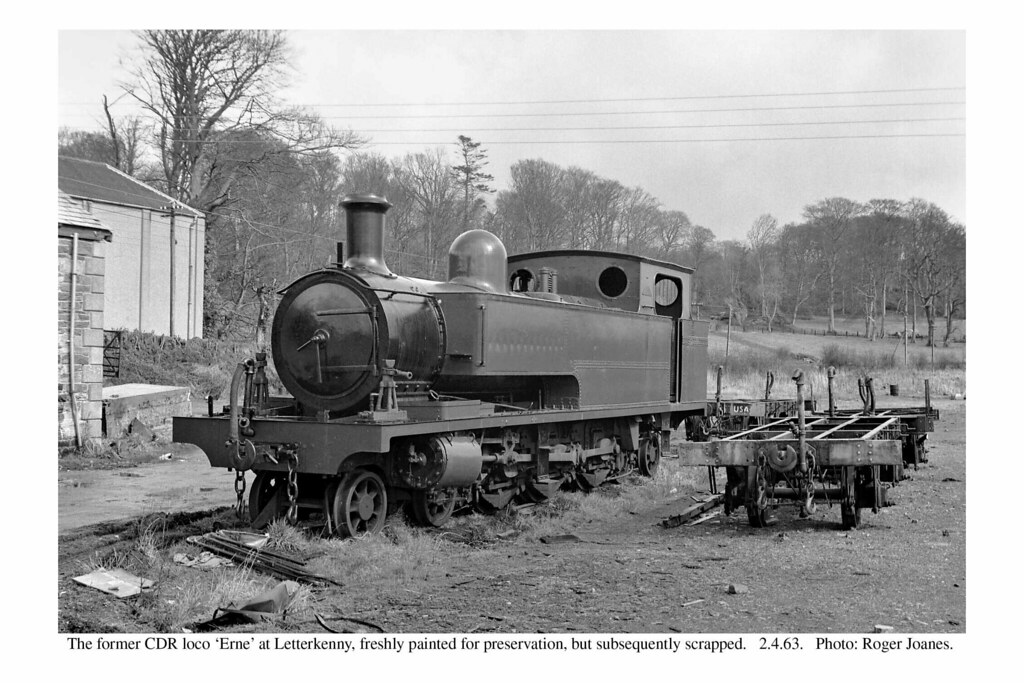 Erne was prepared ready for preservation – but it instead got scrapped. The location is a short distance from the disused platforms at Letterkenny, about where the present Aldi car park is. May 1963. Source: Flickr 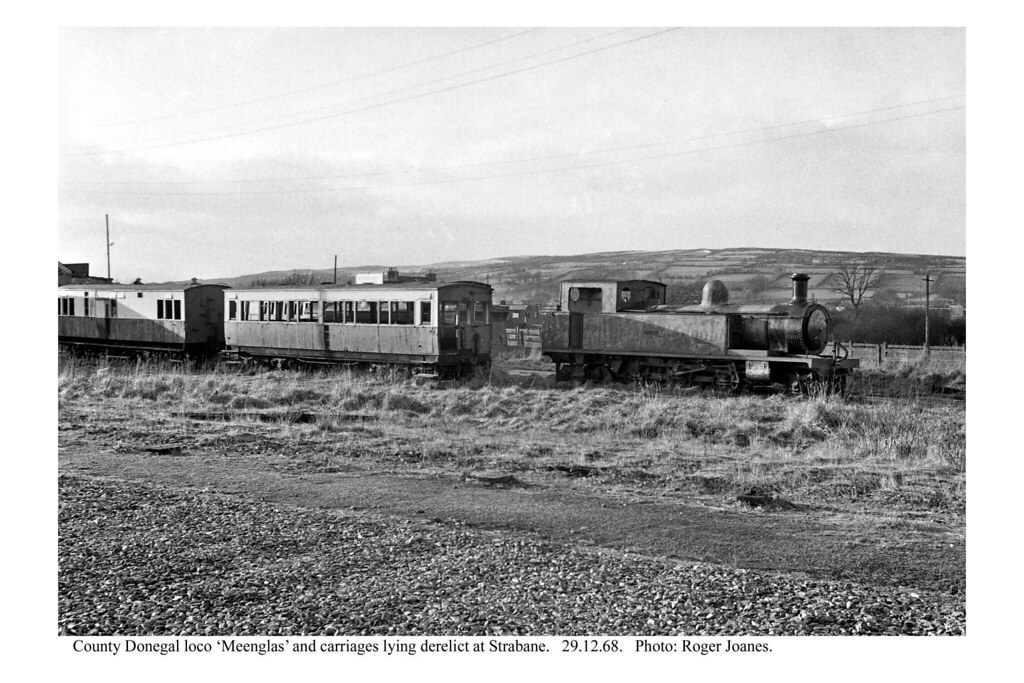 Dereliction at Strabane – ‘Meenglas’ & a couple of carriages seen in December 1968. Source: Flickr 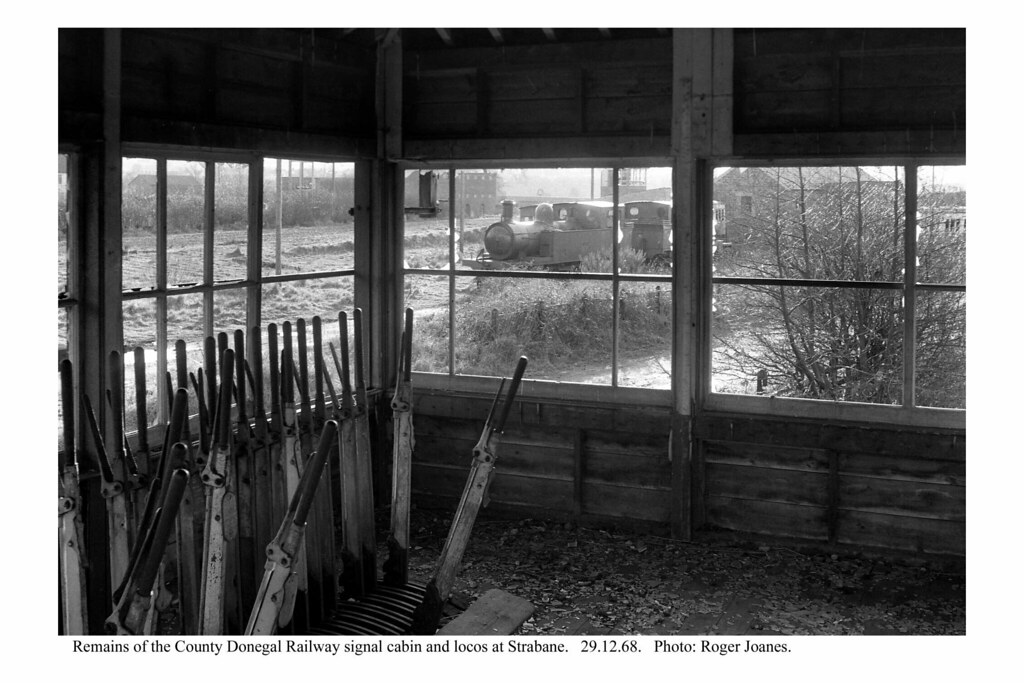 Strabane signal box still quite complete – the smashed windows being an almost mandatory condition of such relics lasting well beyond their final proper use. Source: Flickr

A number of CDRJC locomotives have been rescued – Blanche, Columbkille, Drumboe, Meenglas, Phoenix, plus quite a few railcars, wagons, and carriages. Some were destined for America but never made it. A number of rolling stock lay derelict at Strabane until the mid 1970s when they were finally rescued. Some of the stock made it to Shane’s Castle Railway and was used there between 1971-1995. Below is a list of the CDRJC’s locomotives:

In the 1990s I made a visit to several of the former Irish narrow gauge railway sites and the CDRJC too was included. As the pictures below show, at Ballyshannon I was fortunate to see the inside of the former station.

The former CDRJC station at Ballyshannon. The platform is still evident as are both station buildings. This is 31 years after the last trains had run.

Despite this part being used as a store room/outbuilding for the main house, the ticket window was still there as was the hole where the former station clock once was.

The CDRJC’s station’s ticket office with ticket window and hole for the clock.

I also visited the transport museum in Belfast where there was a considerable amount of museum dedicated to the CDRJC. Not the much heralded new museum in Hollywood but the older one at Witham Street. During research I was surprised to find the building still exists and its sign largely intact for all to see! The downside of this place was the rather poorly lit and cramped layout. It was fascinating though and a couple of hours were spent here.

The CDRJC’s Phoenix in the old museum.

One of the CDRJC’s railcars.

The old line at the Barnesmore Gap. Source: Twitter

Lovely station name board from Strabane. Names include the Lough Swilly Railway’s Burtonport extension. The northernmost and southernmost terminus of this once vast 235 mile long Irish narrow gauge system are absent – Ballyshannon and Carndonagh. Source: Twitter

Drumboe some years ago after partial restoration. Source: Twitter

Meenglas on a rail wagon at the RPSI Whitehead base before partial restoration. Source: Twitter 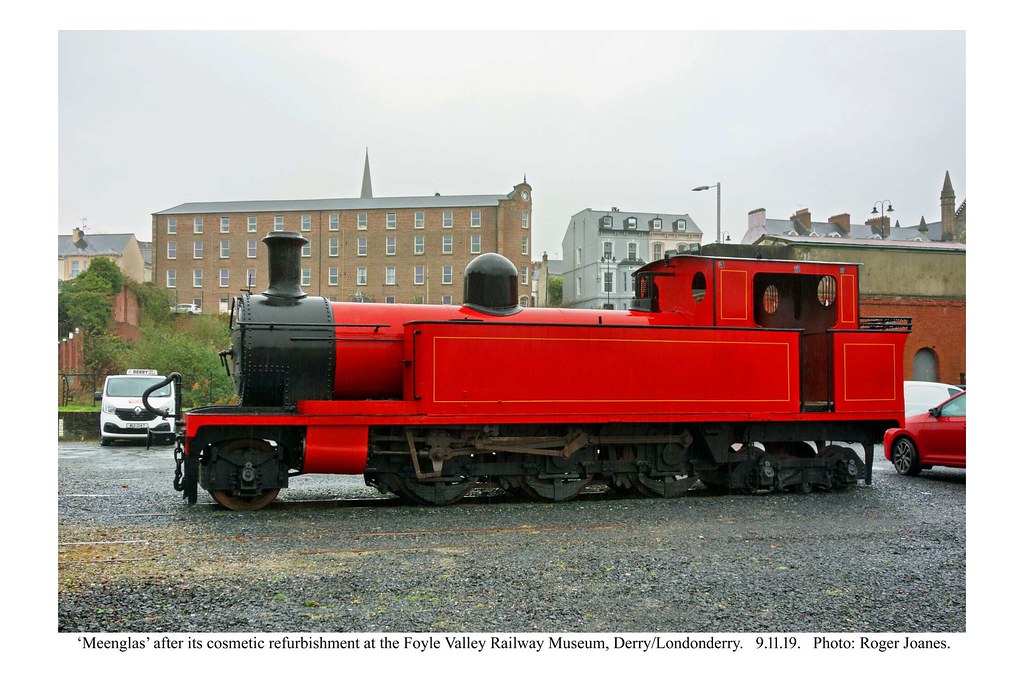 Meenglas at the Foyle Valley museum in Derry after its cosmetic restoration. November 2019. Source: Flickr

The CDRJC’s 1908 built Letterkenny station’s still in use – as a bus terminus. Picture from 2017. Source: Google Streets

Walking along the old railway between Derry & Strabane. Source: Twitter

There have been several attempts to restore the old railway. The most successful has to be the Fintown operation. Then there’s the museum at Donegal. This was established as part of the drive by the South Donegal Ralway Society to restore part of the line, and their first focus was to restore the section through the Barnesmore Gap. However that fell though and eventually they acquired the former station buildings and land at Donegal. There’s also the Foyle Valley Railway in Derry. Its been closed to the public for some time however there are plans to reopen it.

News about the 60th anniversary of the CDRJC’s closure and a special badge. Source: Facebook

The very first copy of The Phoenix magazine, 1991.

Why do I have an interest in the Irish narrow gauge? I’m a fan of the narrow gauge for a start and also knew people in Ireland so it was sort of an inevitability interest in the three foot gauge would arise. I still have my back copies of the society’s magazine The Phoenix. Nowadays its published by the Donegal Railway Heritage Centre.

One thought on “The County Donegal Railways #2”