Yes! London Underground once had a streamlined tube train – although the speeds it would have been doing did nothing of any sort to smoothen the train’s actual progress. Despite claims the design was to enable faster tube speeds, it was said ‘After making experiments,’ it was ‘reported that there was no advantage either in speed or economy of operation.’

Whats more was people didnt like seeing two of these units coupled together – the sloping front ends looked so much out of place and many people complained because it wasn’t aesthetic. Imagine these people now, seeing our Azumas, IEPs, Adelantes, etc!

The streamlined tube trains were an idea of W. S. Graff Baker the tube’s rolling stock designer – and later LT’s chief mechanical engineer – he was one of the early pioneers of standardisation across the tube before Frank Pick and Harold Beck.

The streamlined trains were a result of the formation of the London Passenger Transport Board in 1933 – an organisation that looked ahead with much modernisation of the tube in mind. No sooner than the LTPB had been set up they were looking at the idea of streamlined tube trains and in 1933 a prototype – hobbled out of a 1927 tube carriage – emerged. It was never used in public service and trialled only at night when trains were not running.

It will come as a surprise to learn there was an earlier version used during 1933. This was adapted from 1927 tube stock. Source: London Underground Electric Train

In terms of the main prototypes, the driving motor cars had streamlined ends however the trailer cars used in any formations involving these new streamlined cars were simply standard 1927 tube stock. Graff-Baker’s stipulation was the new trains should not have any equipment of any sort above the floor line – which meant the motors and associated infrastructure had to be kept below the floor. Few railway companies had managed this to date – with the exception of the Japanese.

The idea of keeping the motors and infrastructure below the floors was for the purposes of making the trains entirely a passenger environment rather than the earlier format of having motor coaches as two thirds passenger accommodation and the remainder the motor equipment – as seen in the 1924, 1927 and earlier tube stock.

One of the streamlined cars under construction. Source: Twitter

It is said 18 streamlined motor cars were built, (consisting of nine two car units) although it seems only only four complete units were running on the system which meant LTPB must have had five spare units laying around the depots at Ealing or Northfields! Several motor cars were also built with normal flat front ends. Each of these different types came from various manufacturers – Crompton Parkinson, General Electric Co, British Thomson-Houston and Metropolitan Vickers.

Although the same kind of motor was used in all these units – the Crompton Parkinson Type C200 motor – there was variations across the units in terms of types of the bogies used, as well as subtle styling differences such as new types of couplers etc. Each company also supplied different power control systems. The first three streamlined units came with power controllers much like the joysticks seen on trains today.

Very unusually these trains had just one motorised bogie in the streamlined driving car, a rare move and one that had not been used since the Great Northern and City Railway somewhat unsuccessfully tried the idea too. The single motorised bogie per carriage idea was dropped and the eventual 1938 tube stock came with two powered bogies per motorised car.

A 1935 streamlined motor car rebuilt as a standard 1938 trailer. The shape of the rear end is different to what was normal on the rest of the 1938 stock. The most defining factor however was the three windows on the ends as opposed to the usual four windows seen on standard 1938 tube stock. Source: LURS

Graff-Baker admitted at one point the streamlined trains were ‘fashion’ more than a practicality and as a result they were in fact non-standard. It has been said the units were not effective in terms of their streamlining unless the speed was 80 miles per hour or more! Various tests of the new stock were clearly done between Northfields and Acton Town. Its possible trials were also done towards Hammersmith along the newly installed four track section.

80 mph wasn’t ever going to be a speed the tube trains would normally use thus it was decided to drop the streamlined aspect of the new trains. Even 70mph or a little over that is the fastest tube trains have ever gone in regular normal service, this achieved on the Metropolitan by way of pushing the trains a bit! The A Stock was in fact the world’s fastest ever four rail train to be built. I well remember the carriages’ mad lurches as the A stock belted through Wembley park station! Clearly a smaller tube train travelling at 80mph would have been scary!

The first units were delivered to Lille Bridge in October 1936 and in due course all the units were moved to Ealing Common depot. A press day was held at Northfields in November 1936 – at which point the existence of the new streamlined units was made widely known and this was publicised in all the leading newspapers.

It seems these trains were employed entirely on the Piccadilly Line – Hounslow West/Rayners Lane to Cockfosters – although there are artists images (such as that shown below) of the said stock on the Northern Line. Its said one unit was employed on the Northern Line for a few weeks on gauging trials.

The trains were in public use from April 1937 and their use lasted until the outbreak of war when they were put into storage at Cockfosters and Northfields, a few units doubling as Air Raid Precaution shelters! After the war had ended conversion of the streamlined units to standard tube stock was begun.

In terms of images representing the streamlined tube trains here are a number of examples found on the internet. Apart from the standard publicity shots of the units at Ealing Common depot and between Northfields and Acton Town, photographs of the units are in fact rare.

Most people usually see just one or two pictures of this train, however I found a number from various sources, a couple of which I have not seen, as well as a couple presented from my archives. 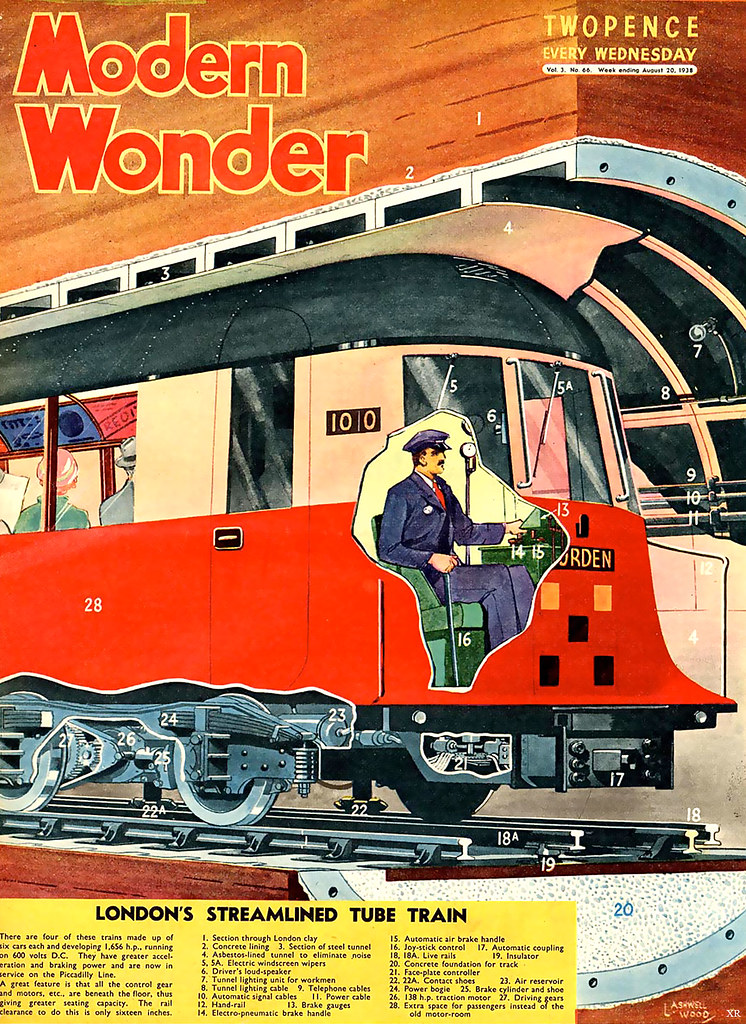 Nice rendition of the new streamlined tube train! This is from Modern Wonder for 20th August 1938. Source: Flickr

Advert featuring one of the streamlined units in the Railway Gazette 1938. Source: Pinterest

The above image is one I have not seen before. However its of great interest because the 1935 stock wasn’t seen just in the usual red/cream livery the tube had. This one was apparently cream coloured all over – or maybe it was grey undercoat? I don’t think so because the sides clearly display ‘London Transport’ – thus this was a finished livery. Again the train is on the Piccadilly Line. This unit is its on its way to Acton Town and is made plainly obvious by the fact its heading for Wood Green!

One of the classic publicity shots of the streamlined units taken at Ealing depot. Source: Pinterest

Official shot of one of the new trains at Ealing Common depot. Source: Pinterest

As has been mentioned, the 1935 stock was altered to become normal trailer cars and were used within the 1938 tube stock. Because of their non standard design they were a sort of oddity and the longest any of these survived was one former streamlined motor driving unit which remained in public use until 1976 as converted trailer stock. 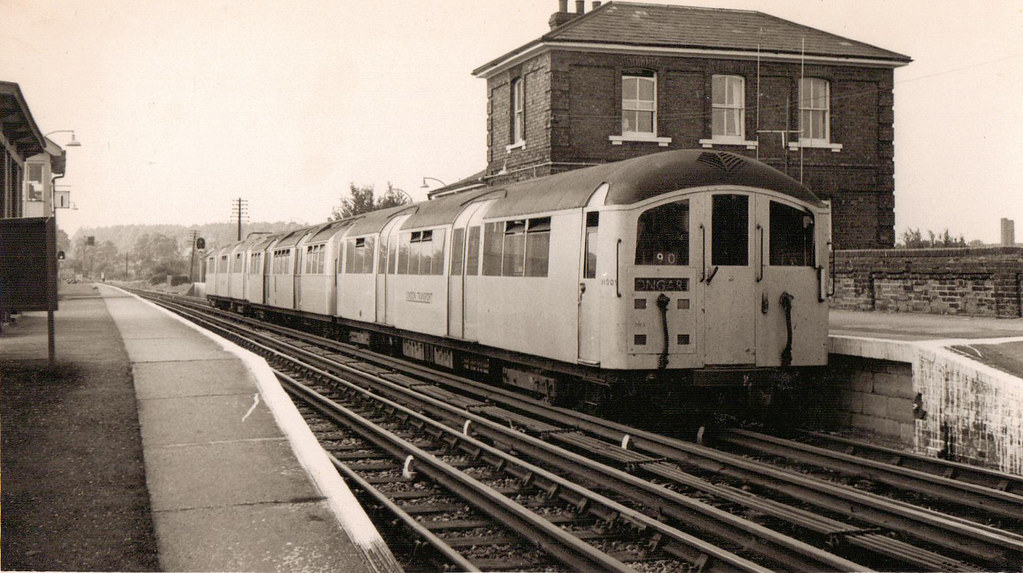 Former 1935 stock (of the flat front kind) in use on the Ongar branch during the mid sixties. Source: Flickr

Of the other units converted, a number were withdrawn early, whilst others were pushed into use on experimental trials for new design features such as articulated tube stock – an idea that never caught on either! A few ended up on both the Aldwych shuttle and the Epping – Ongar branch duties. Those on the Aldwych shuttle had very likely seen service here too in their previous incarnation as streamlined units – something we will read more about later!

The 1935 stock on the Northern Line at Golders Green. Source: PicClick

The picture depicted above is nice if a bit fanciful – for there was no signal box between the running lines as shown here! The other problem is Golders Green depot was substantially rebuilt in the late 1920s as part of the Northern Line expansion works – and the signal boxes were of the modern brick built type with a flat concrete roof!

Streamlined unit on a northbound service to Cockfosters. Source: Pinterest

This is a mystery picture! Its clearly a northbound train for Cockfosters however the platform is on the wrong side. In fact there are no platforms on the underground section of the Piccadilly line that are on the driver’s side. That is apart from one station and that is a big clue! There are other clues in the drawing which proves the location as the platform at Holborn on the Aldwych branch.

The sign says ‘platform 3’ and that was the westbound Piccadilly at Holborn – ironically this platform is the only one on the entire underground section on the driver’s side. Clearly the location depicted in this picture is platform 5 at Holborn on the Aldwych branch. Note the line diagram giving the destinations further north such as Finsbury Park, Manor House, Turnpike Lane etc. These were opened in 1933 thus this is a new sign that has been in existence for just a few years on the Aldwych platform.

The platforms and the train service on the Aldwych branch were of course non-standard. The question one must then ask, judging from the hints given in the picture, is whether there was ever any regular through trains from Aldwych to Cockfosters?

This picture does however tell us the Aldwych branch was no doubt used for the new streamlined trains – it may well be the fact the train had ended its duty and was in fact running as a through service to Cockfosters – a huge rarity!

What about the regular Aldwych branch train? In those days this could have been kept out of the way on the spare line (eg platform 6) at Holborn. Not only that the operation of the branch too was a little simpler in those days because there was a crossover at Covent Garden. This meant it was somewhat easier to switch trains around more frequently. However it still meant through workings of any sort could only be undertaken in the northbound direction.

The 1935 tube train as depicted in Godfrey Phillips’ This Mechanized Age Card series. Its number 23 in a series of 50 cards. The location isn’t anywhere particular – its just a fanciful depiction of the new tube stock! Source: SkyTamer

On the back of the card it is said of the new trains:

Apart from streamlining, other advantageous features have been introduced, such as smoother acceleration and faster running; it is claimed the new design permits greater comfort and increased accommodation for passengers.

This is one from the Blue Band series from 1954, a picture I discovered a few years ago. Its similar to others and appears to be a modified version of those others (eg without a wall that existed behind the train itself.)

Blue Band were mainly a philatelic publisher – dealing in stamps of course. Their picture cards – of which very few exist – were done in the 1950s and the sets of sixteen cards known to have been published include See Britain by Coach and A History of London’s Transport.

This slightly different view being one of the official shots of the same train & location – clearly shows the wall in the background has been removed for the Blue Band picture. Source: Suburban Electric Railway Association