A post with a difference – well sort of! I discovered some number of videos following threads on hydraulic buffers at terminus stations. Thus here’s a collaboration of all those videos I could find of the art of buffer walloping in action! Actually its a means of testing those solid and enduring Ransome and Rapier Ipswich buffers and other types including Oleos. The Ipswich type were built between the 1900s and the 1940s and can still be seen at many terminus stations around the world including a few of our own UK termini.

Buffers are effective – up to a point. There are cases of Ipswich buffers failing simply because the trains were going too fast. In fact any buffer, even with the modern friction types, there’s only a certain level of protection. Even with other classic types of train stop such as a sand drag with a buffer stop at the end of this, these can only give so much protection. There doesn’t seem to be any other way of stopping a train speeding quite rapidly – save for having a solid brick or stone wall with a huge earth infilled mound behind – and that takes up a lot of space.

Nevertheless buffers (or train stops) are important because most train over-runs are at low speeds, and without sturdy buffers in place, a good number of these over runs would have been worse. Another means of reducing possible accidents is to force the train to slow down before it reaches the terminus and various methods are employed.

On London’s underground for example a tube train is forced to slow to a certain speed (10 or 15mph) before it can be allowed to proceed into a terminus platform. If it goes faster the system brings the train to a halt immediately. On the main line railways the Train Protection Warning System is employed instead and what that means is if a train is going too fast the TPWS will automatically stop the train.

In terms of developing the ideal railway buffer, a weird sort of testing facility was established at Ashchurch in Gloucestershire. It was a steel slope down which wagons were sent and crashed into a solid barrier, the reason being to test the crashworthiness of railway buffers. No doubt it was a work of dedication perfecting the most resilient buffers possible. This work later extended towards the development of retarders for freight yards etc. 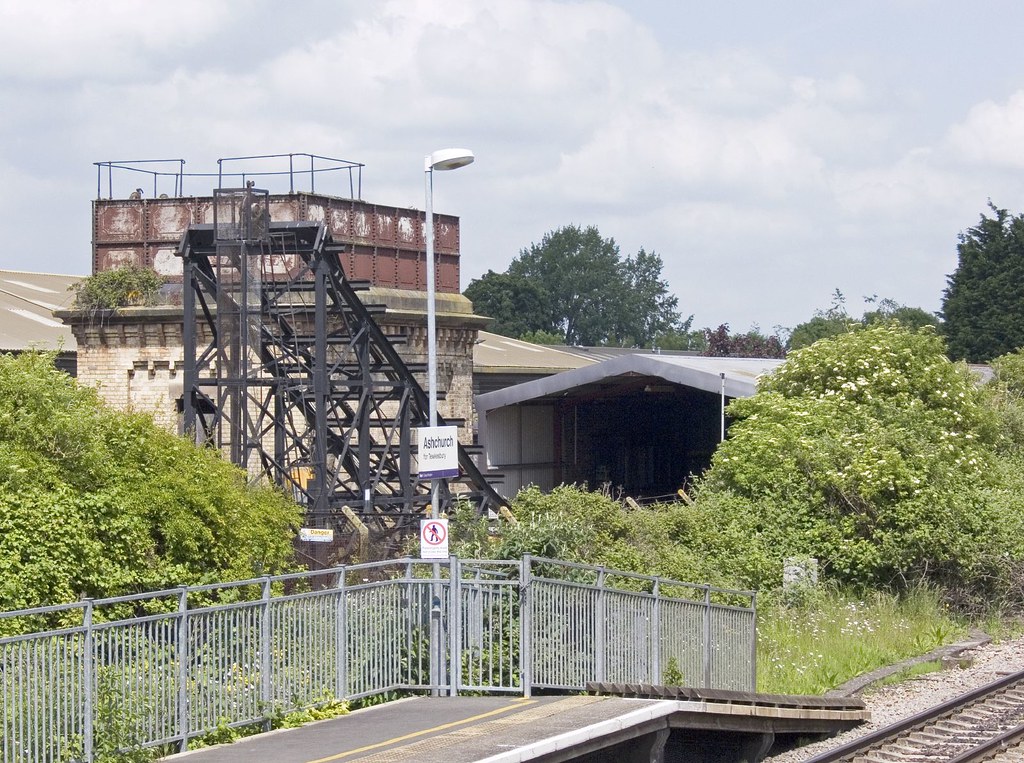 The former buffer testing facility seen from Ashchurch station about ten years ago. Its no longer extant. Source: Flickr

The Dowty Heritage page has some excellent photos of the facility in use, including a number of colour pictures taken during the 1960s.

It must be said the only country that seems to test their buffers on any regular basis is Argentina. We do test the buffers on our UK rail systems but I’m not sure how regular that is. Its good practice to conduct regular tests as the hydraulic or friction buffers are a potential life saver. Its no good letting them rust away and not being able to do the job they were designed for.

The following videos were all filmed in Argentina as they have oodles of Ipswich buffers to test! The videos are in chronological order to make things easier.

I love how the engineers measure the amount of compaction the buffer has absorbed. I think this one was in need of attention!

On the other hand I’m not sure how these buffers work, I think when a train hits them hard they have a much stronger resistance than if a train hit them quite lightly – and its all to do with the amount of impact. The earlier examples (some of which can still be seen on the tube) had extra mechanisms to able the buffer to compensate for what would be more often low speed collisions but those in the main line stations didn’t need these compensation mechanisms.

This oen from 2014 is a low speed test but one can see how the hydraulic buffers begin to expand back to their normal state just a short while after the test. So we see another aspect of these fantastic mechanism – that they were self maintaining.

Playback’s disabled on external sites thus this one must be watched on You Tube!

Another example in which one can see the buffers expand by themselves after the impact. Playback’s disabled on external sites thus this one must be watched on You Tube!

An Alco locomotive testing out the hydraulic buffers!

Playback’s disabled on external sites thus this one must be watched on You Tube!

And the next is from earlier this year!

The next is not quite Ipswich but nevertheless its still a modern type of hydraulic buffer stop being tested!

In the second part of this we look at attempts elsewhere including the UK!