This year is a milestone in terms of Southend’s famous Kursaal buildings. Its 50 years since the Kursaal Amusement Park’s final season, this being 1970. The Scenic Railway did not operate that year. From 1971 the park remained closed despite some attempts to get it open. Two years later the whole theme park was demolished. The site remained empty for more than 20 years. The last set of pictures I took of the Kursaal was 20th June 1990, exactly 30 years ago this day! In 1998 a new housing estate was opened on the site.

The Kursaal was the UK’s first purpose built theme park. It was originally known as the Marine Park upon opening in 1894 thus predates Coney Island by one year! There was to be an Eiffel Tower on the site as the image below shows. This was not built but the main buildings, designed by George Sherrin, were and opened in 1901 when it became known as the Kursaal. Exhilarating rides were offered from the very start with the earliest known being the Aerial Flight.

For those who wonder how the name originated, Kursaal is in fact a German word meaning a place of cure or a ‘cure room’ – eg a health centre or spa. Evidently the idea of having fun was the healthy benefit in question when people visited the venue. According to the Oxford lexicon it means ‘a public building at a spa, in which entertainment is provided.’ The name is derived from two German words, Kur (meaning ‘cure’) & Saal (meaning ‘room’ or ‘hall’.)

The Aerial Flight – which was at the park from its opening in 1894 until the 1930s. Source: The Magic Eye

The new Kursaal building in the early 1900s. Source: Twitter

Staff in the early days of the Kursaal wore smart uniforms – as evidenced by this lovely hat from the 1920s! Source: Twitter

The Never Stop Railway was shown at the Kursaal during 1923, a year before it was one of the main features at the British Empire Exhibition, Wembley 1925-25.

From 1919 to 1934, Southend United football stadium was within the amusement park itself, which meant double fun for footie fans! After it moved to a new home the site was used to expand the theme park including a new roller coaster. Source: Twitter

Map of the Kursaal grounds in the early 1920s. The football ground is shown at right. When that moved this are became the new scenic railway – and later the Laff House, plus a space for the 1960s Paratrooper. Its clear from this the miniature railway originally had a rather longer route. The old Water Chute had not yet been built on site just to the north of the football ground, but when that did arrive the miniature railway’s route was altered to create the necessary space.

The Wall of Death opened in June 1929 to great fanfare. Click on image (or here) to see larger. Source: Twitter

Eric the Whale came to the Kursaal in 1932. It was a somewhat macabre exhibition… Source: Twitter

Al Capone’s car was exhibited at the Kursaal in 1933. Source: Pinterest

The main building in 1933 with Al Capone’s car headlined in big words above the entrance. Source: Pinterest

Newsreel featuring Al Capone’s car at Southend and the Kursaal.

Amazingly this is 1938 and its clear everyone’s having fun! This is the Caterpillar ride at the Kursaal. Source: Pinterest

Another picture taken on the Caterpillar in 1938! Source: Pinterest

There’s evidently fans blowing wind upwards to sort of give a Marilyn Monroe appearance – except this was years before Monroe did her iconic pose!

‘No jitter bugging allowed.’ This is the scene in the famous Kursaal ballroom during the mid to late 1940s. Jitter Bugging was a highly popular dance at the time but frowned upon in the ballroom! Iconic British pop/rock bands played here in their early years including Status Quo and Deep Purple! Source: Twitter

1947 proposals for ornamental gardens within the Kursaal. These were apparently in addition to the amusement park, not a replacement. Source: Twitter

The youngest performer at the Kursaal’s Wall of Death 1948. Source: Twitter

The Airplane Ride at the Kursaal, 1950s. Source: Twitter

Street photograph of a group in 1954. The photographer travelled from London to Southend on the MV Royal Sovereign. In those days there was a regular ferry service between the two locations. Source: Pinterest

The Waltzers in either the late 50s or very early 60s. Source: Pinterest 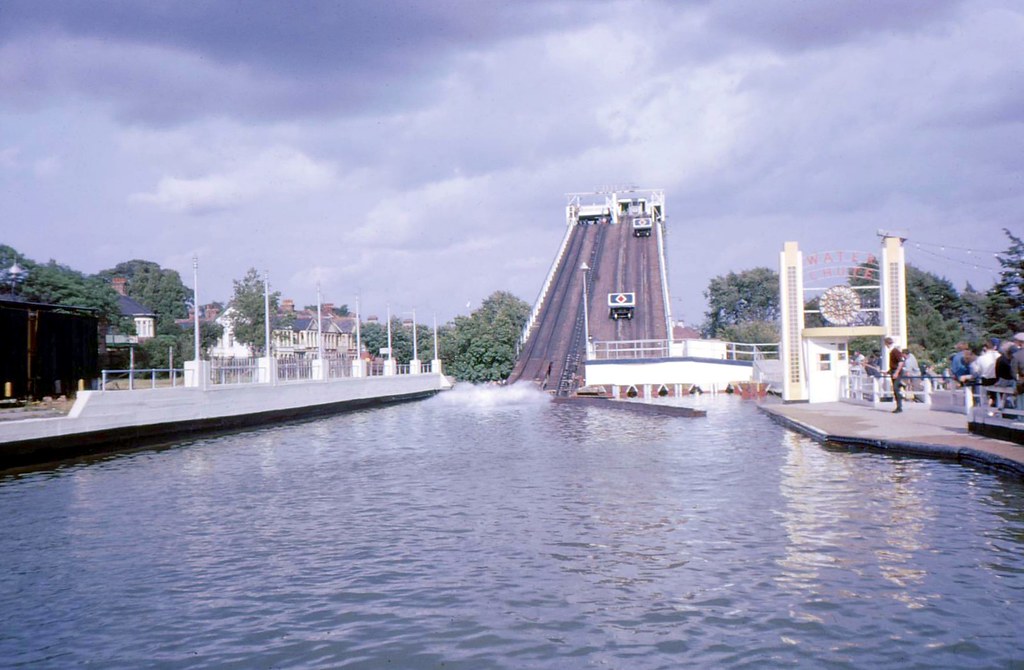 Nice colour view of the old Water Chute at the Kursaal. Its said this is 1962. A new one was built for the 1965 season. The old one needed twenty staff to operate it. The new one, just five. Source: Flickr

Southend bus with the Kursaal behind. Mid sixties. Source: Twitter

The main entrance in 1964 with the new sign very prominent. This was the year of Southend’s Golden Jubilee and all rides were one penny. No wonder there was a queue of kids waiting for the Kursaal to open. Other locations, including the Pier railway offered 1 penny fares too. Source: Pinterest

Rare view of the indoor arcade with its various amusement stalls. This led from the main Kursaal entrance into the amusement park itself. Source: Southend Echo

Aerial view of the Kursaal amusement park in either 1969 or 1970. Some of the rides have already disappeared, probably moved on elsewhere. From author’s collection.

Although the Kursaal amusement park closed at the end of the 1970 season, the famous ballroom carried on a few more years. Some of the last major concerts here were by Deep Purple and Status Quo in 1974/75. Others included Hawkwind, Thin Lizzy, Barclay James Harvest, Lindisfarne, Manfred Mann and Dr. Feelgood. Even Queen played there in December 1973!

Above and below: Advert and tickets for Deep Purple’s gig at the Kursaal. Source: Twitter

The last band ever to play at the Kursaal was Thin Lizzy on 17th December 1977.

Thin Lizzy at the Kursaal during one of their many performances at the venue. Source: Pinterest