The Class 332s have gone forever. The last of the class has now made its way from London to Newport for scrapping and there isn’t ever going to be another Class 332 unit to be seen on this planet This was an otherwise lengthy and drawn out conclusion in terms of the first ever, and no doubt the most highly esteemed trains in the UK to operate the Heathrow Express services. No doubt the Heathrow Express depot is now devoid of trains and will be demolished in due course. The final day of operations for the Class 332s was on the 28 December 2020 and the class ran a full day of services before making their way back to Old Oak Common EMU depot in the early hours of 29 December. There’s a video later in this post showing the last ever Class 332 to leave Paddington, never to return.

In terms of the newer and alternative offering that are the fleet of twelve upgraded and new look liveried Class 387s for the airport services, the first of the batch departed West Ealing EMU sidings at 04.11am and made its way to Paddington to form the first express service from there to the airport – the times being at 04.31 ex Paddington and 04.58am arrival at Heathrow. Rather perversely, and due to the distance from the depot in Berkshire where most of the class will be kept, the second Paddington to Heathrow service began its day a little earlier at 04.03 (booked time 04.09.) Having travelled all the way from Reading to the London terminus, it then formed the 05.06am to Heathrow. The third duty on the rota which should have gone from West Ealing at 05.00am directly to Heathrow where it would then form a one stop short hop 05.22 service to Terminal 5 then the 05.46 back to Paddington – was in fact cancelled.

Real Time Trains showing the second HEX 387 to leave West Ealing EMU Sidings was cancelled. In fact during the first couple of weeks of operation HEX seems to have cancelled a fair number of 387s heading back to, or leaving, either West Ealing EMU sidings or Reading Traincare depot.

In terms of the end of days for the 332s, prior to the 29th December it had been a guessing game with differing dates given for the final date of the 332s in service. The earliest anyone probably knew was just before Xmas when Real Time Trains started giving out definitive schedules for the 387s.

Immediately after the Xmas Day recce Heathrow Express sent out a teaser (no details of course) that the days of the 332s were about to end – because Santa had treated HEX ‘to a new fleet of Heathrow Express trains!’

Coupled with the Real Trains timings, the end for the 332s was no doubt imminent. By now there was just four serviceable 332 units available, the minimum needed to keep the service going. Sure enough at 15.30pm on 28th December 2020 with just a few hours to go before the end, Heathrow Express officially announced the end of the 332s in service.

The final 332s to work in service were 004, 008 and 011. The order they bowed out at the end of the day’s services were 008, 004 and 011. All arrived on time and left at their specified timed slots for the depot (compared to the Class 360s final night where each of the final workings were spotted leaving Paddington station quite a few minutes ahead of their timetabled slots.)

Invariably with the announcement there was a great flurry of messages on social media with many worried that the excellent level boarding afforded by the 332s was being reneged with the introduction of the 387s. It wasn’t just that, people were mortified the 387s were being touted for a premium train service and these units aren’t even ‘premium’ in any sense despite the upgrades they have had.

Not only that a lot of people were very understandably puzzled why such good trains were going for scrap. Exactly! Whilst they have had a hard life the best units could possibly have been given a new home, but as many insiders within the rail industry will point out, the problem is the ownership of the 332s is with BAA and it would be a complex procedure to switch these to the ROSCOs – who wouldn’t want a small fleet of non-standard railway stock anyway.

A further problem is the current situation (this being the coronavirus) hence many rail operating companies have been reducing stock requirements or eliminating certain tranches of stock altogether (such as the Class 317s) which means a lot of surplus stock is going to be sloshing about – the small fleet of Class 332s simply wouldn’t have stood a chance with all these other units coming off leases. Not only that there was the question of their condition. They looked fine to the casual observer but they were very worn units by way of having been very intensively used. In a sense the kindest thing was to scrap the Class 332s – no matter how aghast anyone would have been by that.

I dont know if it would help but this Twitter thread by Richard from RAIL magazine is informative and it does try to explain the problems fully in terms of finding a new operator for the 332s. Sad of course but as clearly explained, no rail operator would have wanted to be taking these on.

The ORR’s congratulatory tweet on the introduction of the Class 387s to the HEX services.

The Heathrow Express 332s – in retrospect

This is a brief look at the Class 332’s early days, in their latter days, as well as a video of the final unit to leave Paddington in December 2020.

The new then Class 332s on the cover of Modern Railways in 1997. This is one of the units on the test track at Velim in Germany.

Unit 332004 – one of the final pair to leave the HEX depot on 15 February 2021 – is seen at Paddington in this photograph I took two decades earlier. A few days later the twin towers atrocity occurred and overshadowed the rest of that year. The Class 57 (57601) as some will know, at the time sported its famous Porterbrook large logo purple livery. Its seen in charge of a FGW service.

The front of the newer GWR IET and the 21 year old 332 seen at Paddington. In comparing, which of these looked the more modern?

332011 was the final unit to work the airport express service. It is seen prior to an early evening run to Heathrow on the 28th December 2020.

Video of the final 332 to leave Paddington for HEX depot in the early hours of 29 December. 332011 left the station at 00.28am. I ran a test movie beforehand and it was fine but in the event it somehow got slightly out of focus!

The HEX 332s are moved to Newport

A brief look at the trips from the HEX depot to Newport in South Wales for scrapping. These moves began a few weeks before the 332s ended service, whilst the final one took place on 16 February 2021. Although practically the entire stock has been scrapped at Sims in Newport, one was scrapped at Peterborough in November 2020. This was the first to be scrapped and the unit involved was 332014 which hadn’t been used for the best part of four years.

Although the above tweet gives no numbers – according to observers units 002 and 003 were taken to Sims on 15 December 2020. 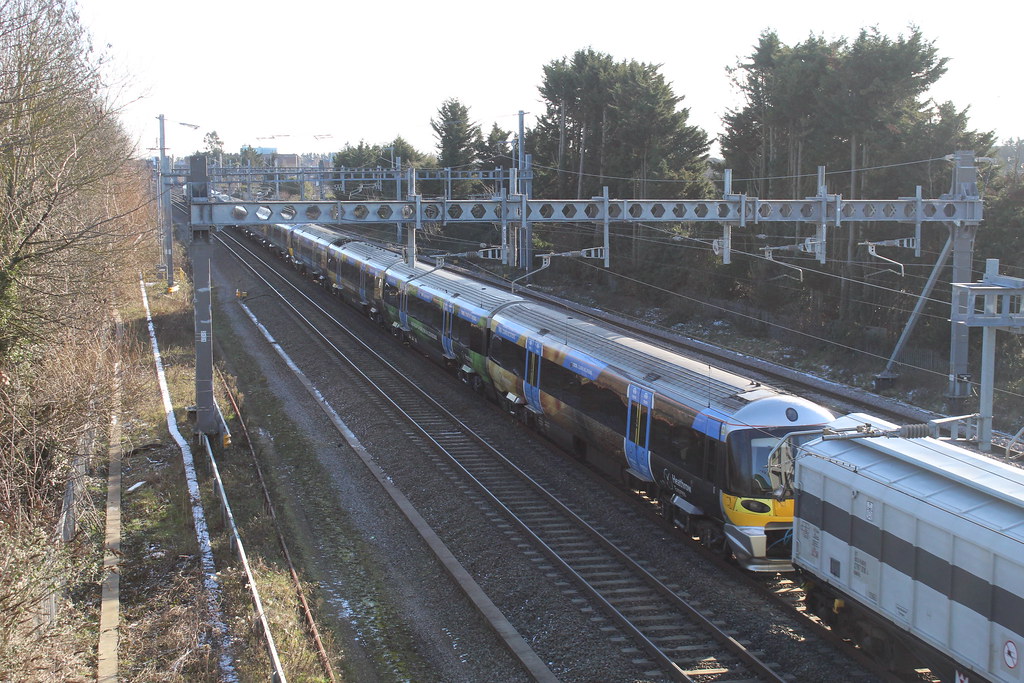 Some three months later after the first unit was scrapped, on the 16th February 2021, the Class 332s left their depot for the last time albeit to be towed to Sims for the cutter’s torch. These were units 004 and 007. The video below shows the units, seen at Reading en route, and towed by 66708 & 775 with a special headboard commemorating the end of the 332s. The HEX depot is now empty and will no doubt be demolished as part of the works to build a new HS2 station on the site.

Part of a Class 332 unit is to be preserved, albeit it will be stood on a plinth. 332001 was taken by road to Goole where it will be displayed outside the new Siemens factory to be built here. 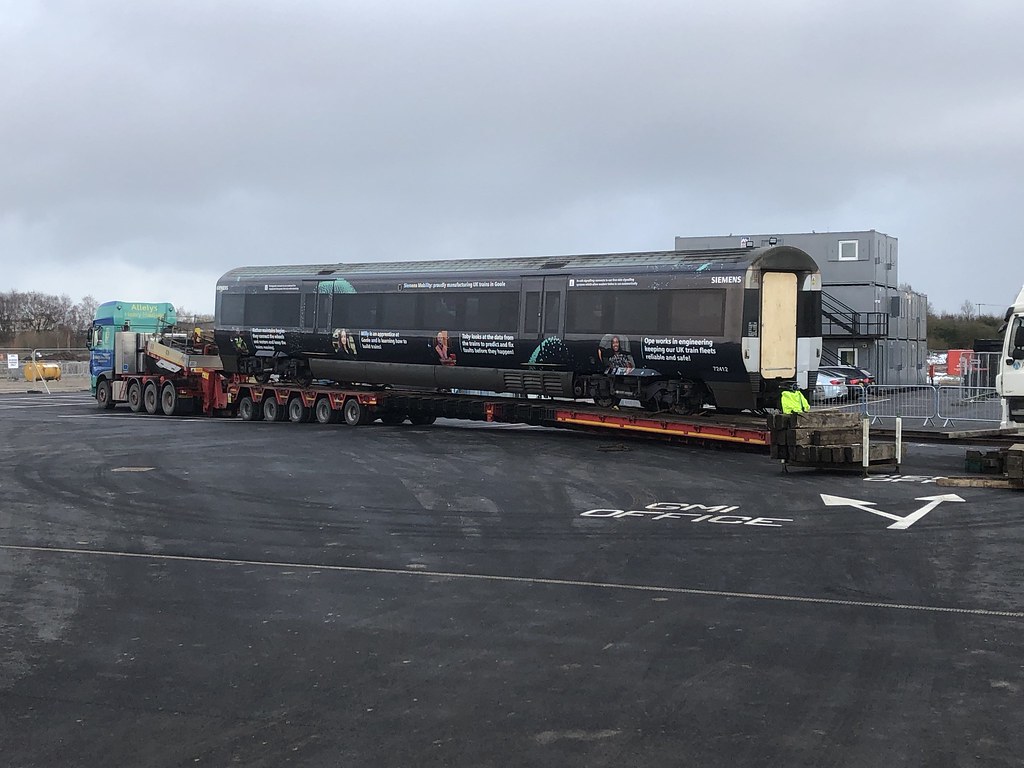 One of the carriages from 332001 arrives at Google. It has been specially decorated to reflect the work of Siemens. Source: Flickr