This was a true rarity! A tunnel used to stable DMUs between journeys, and as far as I know, there was only one example outside of urban areas on Britain’s railway system (although there are other examples where DMUs reversed in tunnels to take up duties in the other direction.) A few preserved railways now use tunnels to store their rolling stock, but that’s a different story! This mysterious tunnel was once part of a branch line, but it had closed many years before, and it was a short stub of this branch line in use as a stabling point. In 1992, I took a photograph of a Met Camm DMU in the aforementioned tunnel. I almost missed the shot as it caught me unawares. It surprised me the practice was still being done. It ended perhaps a year or two after my picture had been taken.

My photo isn’t the best because it’s a little blurry for I snapped it as soon as I noticed the DMU inside the tunnel. However, it is the only example I’m aware of which shows a DMU parked in this particular tunnel. Other peoples’ shots show DMUs emerging from it (one example is shown below) or approaching it after dropping their passengers at the nearby station in question. Anyway I found this photograph recently among a pile of others, thus I thought it would make an interesting subject.

The Met Camm DMU spotted at rest in the Hayfield tunnel just outside New Mills Central. I took this picture in the summer of 1992.

Where is this enigmatic tunnel? It’s located in Derbyshire’s New Mills Central, and the tunnel was once part of the route to Hayfield. This lovely branch closed in January 1970. That closure was allegedly done to save money on the upkeep of the tunnel at New Mills. Oh the irony of it! After the line was closed, trains terminating at New Mills Central continued through the tunnel to the signal box at New Mills Tunnel End and stood there for the duration of what would have been a journey to Hayfield! At some point BR clearly thought the exercise was pointless thus decreed its trains went no further than the tunnel. BR took up the rails beyond the tunnel, blocked off the eastern portal and sold off the trackbed.

At least the new arrangement meant trains could now stable in the tunnel in full view of New Mills Central signal box, so that was perhaps a better arrangement – even though it still meant the tunnel had to be used! Soon after I had taken my picture British Railways took the decision to close that short bit left of the Hayfield line. That was the absolute end of this once delightful branch. 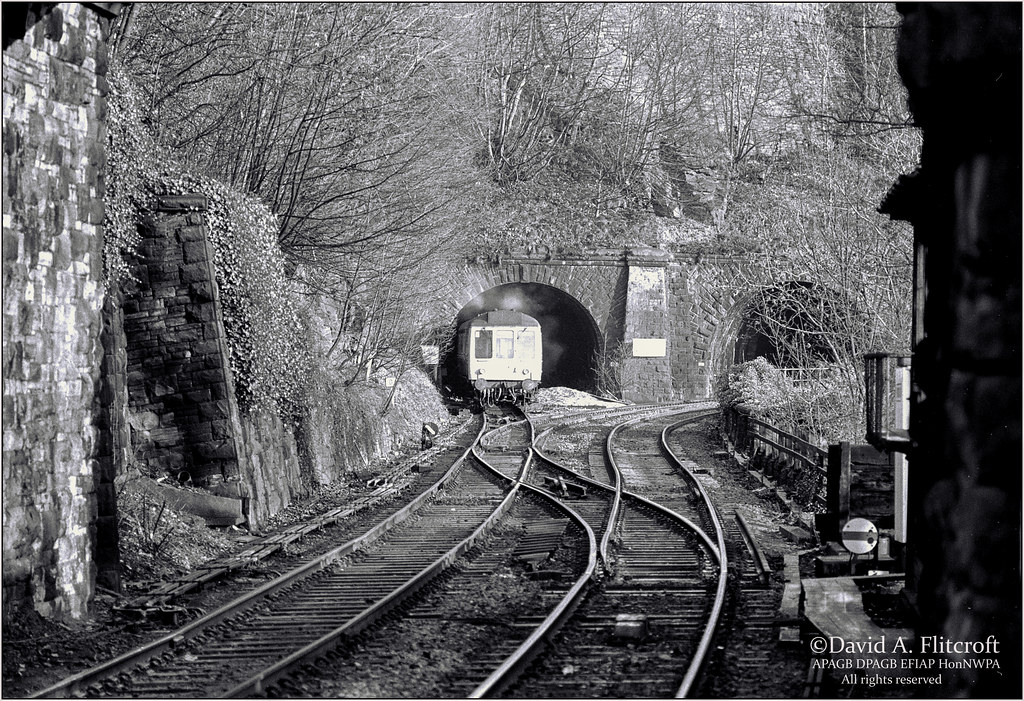 Class 108 DMU emerges from the Hayfield branch tunnel to take up a working from New Mills Central to Manchester in 1986. Source: Flickr

If anyone is not sure where the tunnel is, its next to the New Mills tunnel on the Hope Valley route. That route curves to the right whilst the Hayfield route once curved to the left. Thus it was two tunnel entrances side by side leading off in opposite directions. The picture below from Steven Ansty is a good one showing the Hayfield tunnel as seen from the platforms at New Mills Central.

Although some describe the tunnel as the New Mills tunnel it has always been known as Hayfield Tunnel even though it passes under New Mills too! If one zooms into this old photograph showing the two tunnels together side by side c1910 on the ETH Zurich website it can be clearly seen our tunnel in question is called Hayfield tunnel. The big confusion for many I suppose is the signal box at the eastern end of the tunnel was known as New Mills Tunnel End!

Map I adapted from Alan Young’s work (available at Wikipedia for use and modification) to highlight the Hayfield branch’s location.

A quick trip along the branch to Birch Vale and Hayfield!

A quick look at the line in its former days! Many people lament the closure of the branch because it would have been a very useful asset today in terms of providing good access to the Peak District as well as greener and more environmentally friendly transportation to Manchester. Few are aware Hayfield station was the very location in April 1932 where hordes of walkers arrived en masse by train, and then gathered to proceed towards Kinder Scout. En route, there were fights with landowners who did not want their privately owned countryside to be used by the public. It would be the start of a mass trespass campaign to assert the countryside should be open to all – and not for the benefit of a few rich landowners. Its of course thanks to this very action the UK has a good amount of open countryside and many public footpaths giving numerous walking routes.

Sadly the train isn’t any sort of real convenience these days for reaching Kinder Scout, the highest point in the Peak District, thanks to the UK’s mass rail closure programme prompted by Beeching. Despite being the terminus of a very useful commuter route from Manchester, the Hayfield branch closed in January 1970.

A great shot of a Class 66on a freight approaching New Mills Central (the signal box can just be seen at right.) Straight ahead is the former tunnel that marked the start of the Hayfield branch. The other, the New Mills tunnel (at right) is somewhat obscured by the train itself. Source: Twitter

The tunnel as seen in 2016 with a bit of track still in it. Source: Wikipedia

Board giving the name of the structure as Hayfield tunnel as well giving as its length. Its the same board as seen in my photograph. Source: Tunnels UK

The far end of the tunnel is now blocked off and the former trackbed now constitutes the Sett Valley trail towards Hayfield. Source: Twitter

New Mills Tunnel End signal box where the single track line to Hayfield began. A fairly similar photograph on the New Mills Local History Society website tells us this view may have been taken about the time the branch closed in 1970. The track on the left was a siding to a nearby works. Source: RCTS (Note: many pages including this one have been deleted thus an archived image is used.)

The tunnel signal box! A small but delightful structure. It was actually some distance from the tunnel’s end but still was called New Mills Tunnel End! Source: Annals of a Branch Line

The branch’s one intermediate station at Birch Vale looking in the Hayfield direction. Source: Wikipedia

Derby Lightweight DMU at the picturesque Hayfield station in 1963. The 636m (2,087ft) high Kinder Scout is visible in the distance. Source: Wikipedia 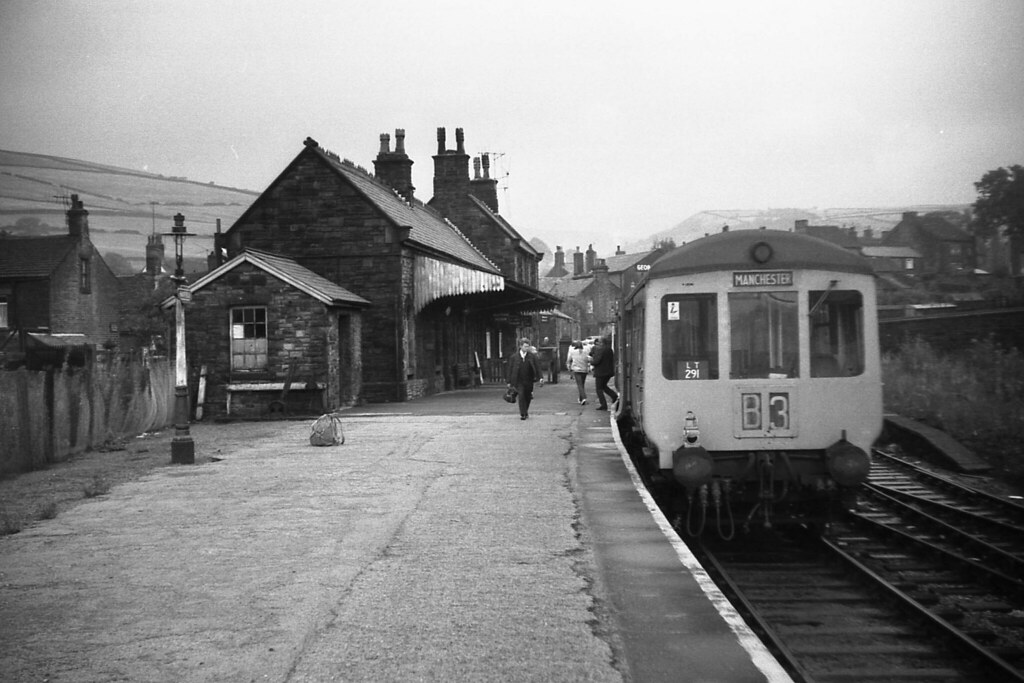 Just for the memory! A nice shot of a tank engine about to run round its train at Hayfield station in 1956. Source: Sheffield Star

Tourist information board at the site of Hayfield station. Its said Agatha Christie was a regular user of the Hayfield branch! She used it on visits to the historic Upper House in Hayfield. Source: Twitter

One response to “A mystery DMU tunnel!”