Along the Milwaukee Road #3

This is the third part of the Milwaukee’s electrified Rockies route through Montana towards Eastern Idaho. The company’s choice of route was questioned especially as it paralleled other railroads. These outlasted the later Milwaukee company because they were in a rather better position strategically, financially in terms of routeing and station locations and a wider spread of industries that were served.

Some of the Milwaukee’s stations in this part of the world were however better placed than their competing lines. Alberton and Superior for example – but that didn’t help the Milwaukee too much because what was important for customers was where these lines actually went – and how long their products would be in transit. As we have seen before its why the Milwaukee’s Pacific extension, despite all its innovations, went to the wall.

Map covering the route between Missoula and St. Regis. The section to Saltese is covered later in the post.

Before we move on, originally this was due to be one piece covering the entire route from Missoula to Avery however I split it into two instalments – Missoula to Saltese and the second covering the St. Paul’s pass.

From Missoula westwards there’s Hiawatha Road which is the actual railroad’s alignment – although pics of this not very good on Google Streets. Further along the highway is something more commendable and that’s the Primrose substation. This is the third such example that can be seen on Google Streets! Despite the appearance seen in these views, its now been restored and is a recognised historic structure.

Primrose substation from the highway. Its about eight miles (14km) west of Missoula station. Google Streets.

Primrose substation before it was restored. The latest view Google has is this from 2012. Google Streets.

Primrose substation and platform when it was in use. Source: Primrose station

The demolished bridge at Frontage Road. Below is how it looked with the Milwaukee at work. Google Streets.

Next up is Alberton station. Here’s a Google Streets view of this. Its one of the few station buildings that remain on the Milwaukee Road’s former Rockies Division. Alberton was once a busy rail depot because of the forestry in the locality – like a number of other communities along the line (such as Deer Lodge, Harlowton) Alberton too once had a huge reliance on the railroad for employment. Apart from the station building there’s little to see of the Milwaukee in the town It seems there was an overbridge at the west end of the town but that has been demolished.

West of Alberton the Milwaukee crossed the Clark Fork River as it does a number of times at Cyr. The old piers for the crossing can be seen. Google Streets. 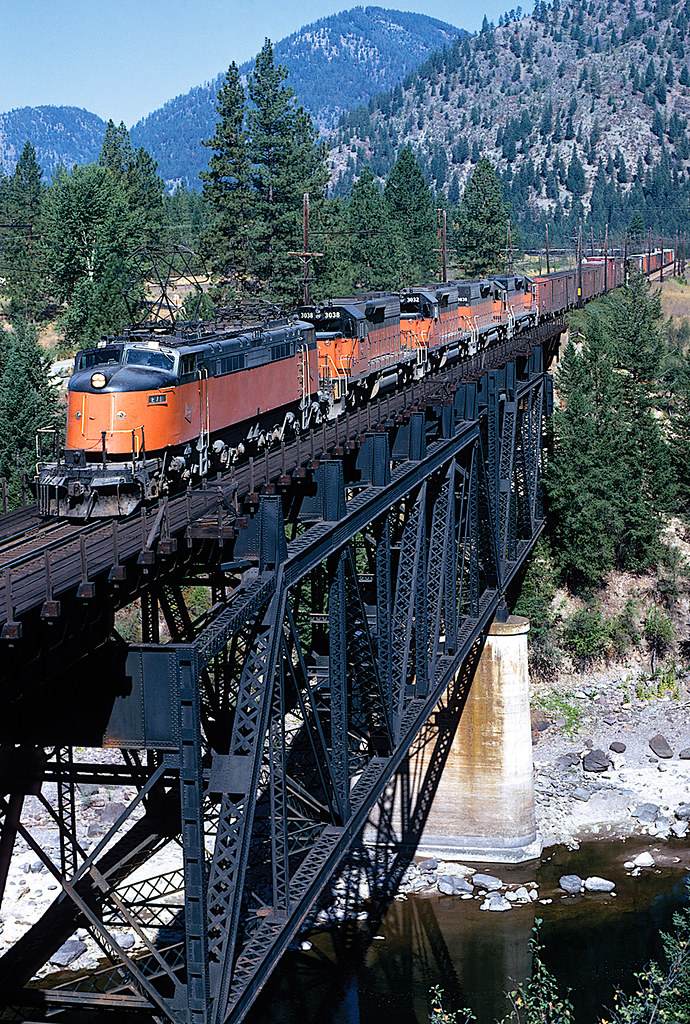 This is Triple Bridges in Alberton Gorge. There was once a trio of bridges here including two railroads ones. The nearest seen here is the old highway crossing. The taller one is the Milwaukee’s own. There was another behind belonging to the Butte Anaconda and Pacific Railroad & no longer exists. Google Streets.

In this view the old railroad track can be seen to the right. The route followed the old highway for a good bit of distance from Alberton to St Regis. Google Streets.

This road overbridge down a side road to the right can be seen east of Superior – though I couldn’t get any closer… Google Streets.

In terms of the next important stop on the Milwaukee Road this is Superior. Here’s a perspective of the town and its river crossing with the old Milwaukee alignment in the centre… the railroad facilities were once quite substantial but by the time the line shut the station had vanished and it was simply a piece of plain track through the town.

View towards Superior from Mullan Road. The route of the Milwaukee line can be seen between river and road. Google Streets.

Superior exists not because of the railroad but the gold rush. This began at nearby Cedar Creek in October 1869. It made sense for the Milwaukee to establish a stop here, but that didn’t last beyond perhaps the fifties. Fortunately the Northern Pacific route remains and here’s a shot of their station on the other side of the river.

The Milwaukee’s station was at the bottom of an incline from both the Pipestone Pass and the St Paul’s Pass. Going eastward to Pipestone (265 miles) the railroad would have a total elevation of 3,620 feet to climb. Going westward to the Bitter Root mountains the climb was 1443 feet – the more gruelling of the two because of a much shorter distance there (about 42 miles approx) plus the fact most of this climb (and descent the other side) is compressed into about fifteen of the last 25 miles or so to Avery. The total distance to Avery is 69 miles.

The former Wisconsin based railroad passed Superior on an embankment, and the station was built on top of this embankment. Here’s a dramatic old picture showing the Milwaukee’s line at Superior – including its elevated station, water tower and signals – and the old bridge (built 1890s) across the river at right.

Superior station. The location isn’t given on the blog I sourced the image from – and I couldn’t find out where it was. I eventually sussed it due to the shape of the hills. Source: Geared Steam

Similar perspective today. Actually this is the nearest I can get to the old station site which was on the right. Google Streets.

Some people might look at the surrounding terrain and say ‘hey that’s not Superior.’ But it is! From a perspective nearer the bridge here’s a crop showing those distant slopes – and they are the same shape as in the old photograph….

This clearly shows how the Milwaukee Road has been entirely rationalised – the station and freight yard facilities have gone and its just a plain track.

Former Milwaukee crossing over Keystone Road – about mid way between Superior and St. Regis. A very modern construction for its time (1914.) Google Streets.

The date on the bridge – 1914. This is clearly a replacement. Possibly a wooden trestle stood here between 1909 and 1914. The Chicago Milwaukee and St Paul replaced many of its wooden trestles very early (even though they too built huge steel ones from the very start like those we will see later.) Clearly this one was done in lieu of the electrification work. Google Streets.

The old US highway crosses the former railroad (at left) to the west of Spring Gulch. The valley between Alberton and St Regis gets broader and broader and the Milwaukee Road had an easy job along this section. It was very lightly graded upward in the direction of St. Regis. However that would soon change once the St Paul’s pass had been reached! Google Streets.

The alignment across the Clark Fork River at St. Regis can be seen on Google Streets, however its very difficult to find a perspective that shows this to great advantage. With a bit of perseverance I found one – but discovering that was probably a fluke as its just one single picture left over from a 2012 survey!

St. Regis with a Little Joe passing by on the Milwaukee’s elevated section. Note the semaphore signal at the Northern Pacific’s railroad station. The Milwaukee had these too at some of its manned stations. Source: Pinterest

From St. Regis to Avery over the Bitter Root mountains practically the entire Milwaukee route is now a public right of way of differing grade – trail, rough track, forestry road etc. The first bit out of St. Regis is a rough track for vehicles, bikes and walkers as far as the Dominion trestle, just past Saltese and this is known as the Olympian Trail. Its still not complete at the time of writing as there’s a missing bridge between St Regis and Little Joe Road.

The first part of the Milwaukee Road out of St Regis (at the time Google captured this image) was an accessible track for a short distance. A missing bridge some distance up this alignment means the full tourist route is not yet completed. There’s the remains of a colour light signal base by the trees at right. Google Streets.

From Little Joe Road (cant think where than name would have come from lol!) is the start of the Olympian Trail (the driveable, walkable, bikeable section of the former Milwaukee Road.) Google Streets.

The Milwaukee road (at left) can be easily seen alongside the highway and the St. Regis River for a good distance out of St Regis – the power poles being the usual giveaway. Google Streets.

A few bridges over the St. Regis river can be seen – here’s one…

As the highway climbs upwards the Milwaukee Road continues to follow the course of the St. Regis River. Google Streets.

Between Drexel and Henderson the river and railroad take a twisting course while the US highway simply takes a direct course. From the heights of the highway’s viaduct the former Milwaukee alignment (left) can be seen here traversing a loop in the river. Google Streets.

Next up is Haugan station. There’s nothing to see, just this view of the old railway alignment on Google Streets but nothing special as its not the actual station site. The two pictures below show how it once looked and how it is today… 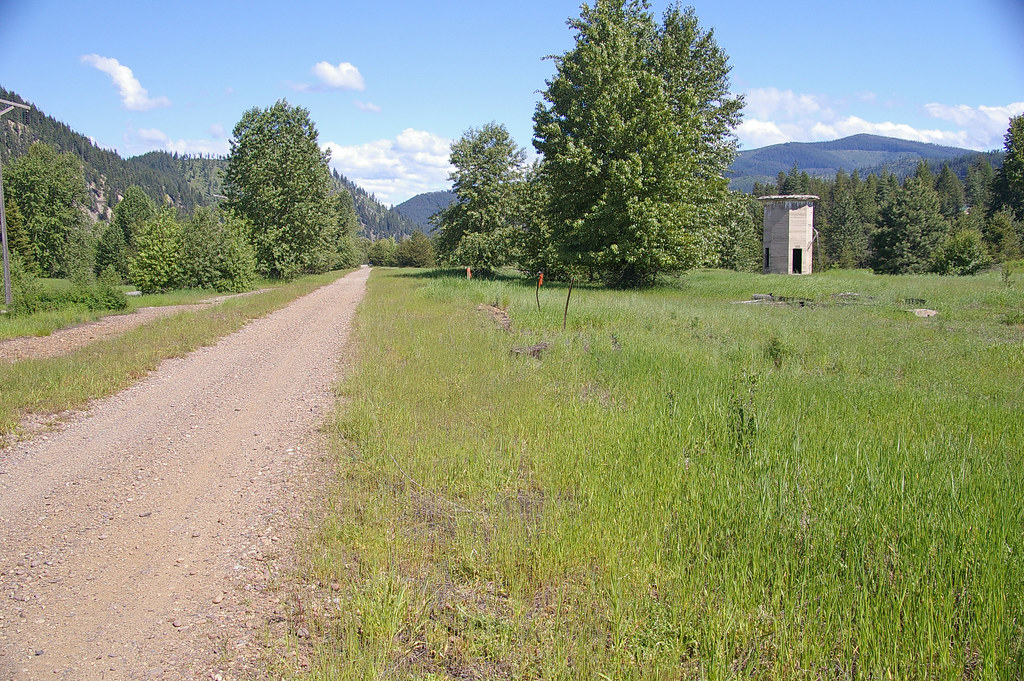 Nothing remains at Haugan now – save for the base of an oil tank which was in fact for the use of steam locomotives prior to electrification of the line. Source: Flickr

The trestle at Saltese. The last crossing in the tourist trail section to be completed & upgraded for public use. In fact its not owned by the Forestry authority but private individuals who fought to save the trestle from being demolished. The former Northern Pacific railroad crossed the road seen here on the level. Google Streets. 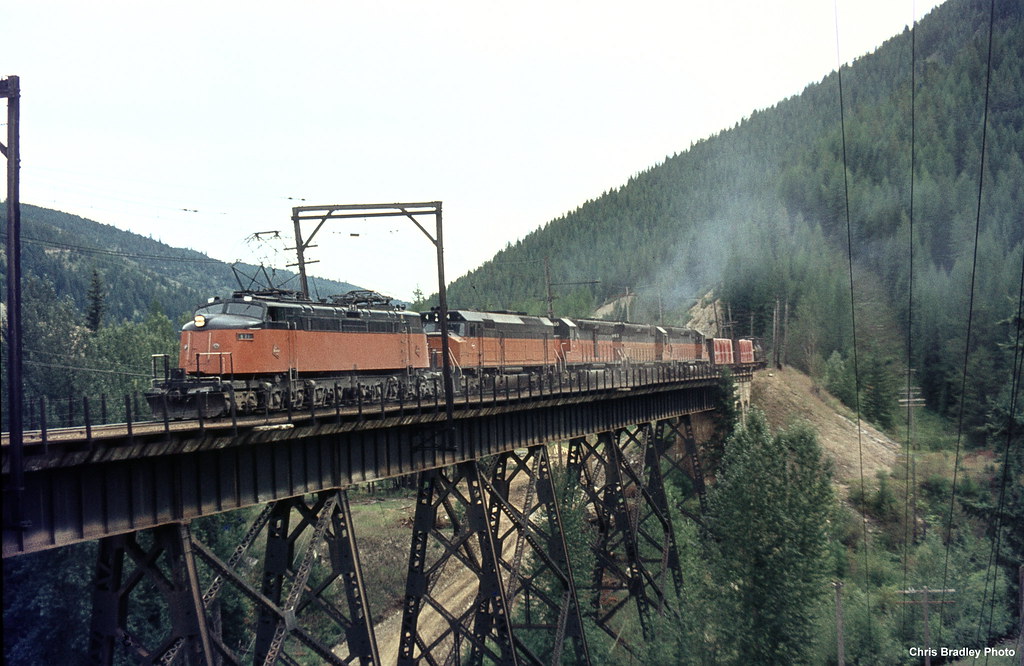 A freight train crossing Saltese trestle – with one of the Little Joes as a ‘helper’ – this being to ensure the freight train did not have problems on the very steep gradients of the line. Source: Flickr

America, Historical
Previous
Next
We use cookies on our website to give you the most relevant experience by remembering your preferences and repeat visits. By clicking “Accept All”, you consent to the use of ALL the cookies. However, you may visit "Cookie Settings" to provide a controlled consent.
Cookie SettingsAccept All
Manage consent