George Francis Train was an American who introduced tramways (streetcars) in the States. In 1860 he came over to England to introduce his tramways which had been running in the USA for three decades. Train opened his first line at Birkenhead in 1860, followed by three short lines in London during 1861.

A comparable view of the Marble Arch today. The tram terminus was roughly in the foreground. The feature image on this page actually uses this modern picture to illustrate the tramway as it would have looked! 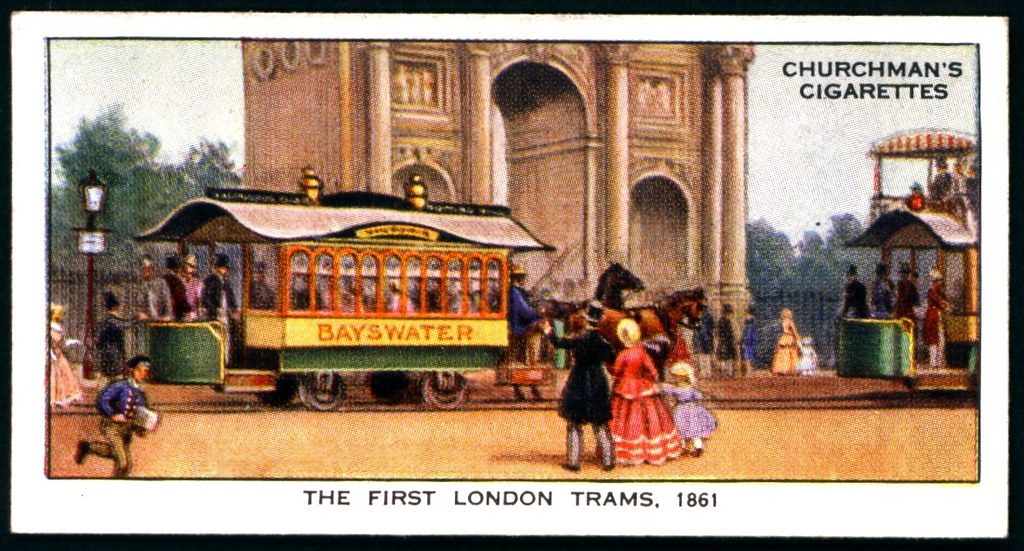 Two of Train’s new tramways were built in Victoria Street and from Kennington to Westminster Bridge. The most noted of these new lines was the one to Bayswater. Just over a mile in length from Marble Arch to Porchester Terrace. Some accounts claim it went to Notting Hill – which it didn’t – although some illustrations do show the tramcars with Notting Hill as a destination.

The above view shows the ‘tram’ at Marble Arch with ‘Victoria’ (single deck) & Napoleon (double deck.)

It seems the ‘improved street railway carriage’ may be an allusion to France, whose capital invented the double decker. The tramcar itself would have been an innovation in those days long before double decks became the norm.

Train’s original plans mooted a route from Notting Hill to Bank via Oxford Street and Holborn, a plan that was never realised because it was going to be very expensive.

Ultimately Train set up a company known as the Marble Arch Street Rail Car Co. It’s role was to manage the ‘Tram Road from Tyburn to Bayswater’ with a possible extension to Notting Hill Gate. The tramway opened on 23rd February 1861 as the Artizan (shown below) tells us.

The street-cars used for George Train’s three London lines of 1861 were clearly based on his American designs. It seems four cars were used to operate the horse drawn tram service. Three of these street cars were definitely in service by the 1st April 1861 as the Artizan confirms:

Its claimed a fourth, double deck, street-car was used. Whilst no written evidence proves it, the only engraved scenes of the tram at Marble Arch do show this double-decker car, known as Napoleon. The names of of the other tram cars were Her Majesty, Princess Royal and Victoria.

It seems the decision to allow the Bayswater tram was passed by a handful of commissioners without any prior consultation, thus claims were made the construction of the line was entirely illegal having no parliamentary power of authorisation.

One of the biggest objections to the Bayswater tram were the upper classes who lived along its route:

George Train “did not understand the social geography of London because in 1861 he laid out his trial tram rails on the Bayswater Road between Marble Arch and Porchester Terrace. He had chosen the most fashionable part of town, thus raising a howl of protest from the carriage-owning classes. They could not tolerate these new vehicles hogging a fixed section of the road, on rails sticking up above the road surface and proving an obstacle to carriages.” (The making of modern London by Weightman/Humphries p62, 2007.)

The Metropolis Road Commissioners met in early July 1861 and concluded it “understood that the Board have no legal power to confer on Mr Train the exclusive use of the tram or portion of the road on which it is laid.”

The rails ‘sticking up above the road surface’ were in fact of a type known as a step rail. The reasons for the step rail was, as some contemporary accounts of the time relate, to additionally provide a tram-road for ordinary street carriages.

The step rail had a very wide bottom plate in order to to account for many widths of horse carriage. It was an unusual attempt by George Train to provide guidance for all forms of street carriage, not just his trams, and ultimately was an experiment that failed.

The Swan Inn, Lancaster Gate. One of the very few buildings extant since the days of the Bayswater tramway.

Train’s experiment could be said to be an early precursor of the guided busway system found in some cities. The difference there again is the buses are all of the same gauge between the wheels so it works. Horse carriages had several standards of gauge and the Bayswater tram could only account for the most common gauges.

The tracks themselves were quite substantial, the bottom flange of the step rail was five inches (to accommodate both trams and street omnibus) whilst the upright, guiding, flange was just one inch in height. The total depth of the permanent way was fourteen inches (this consisted of the step rails, longitudinal timbers and tie bars.)

Clearly a considerable amount of work had to be expedited in building the line especially as the Bayswater Road was by then no dirt road but tarmacadam which of course took quite a bit of effort to dig up.

People came in their thousands to see the new trams and this made George Train lots of money. Residents complained of access to their houses being blocked by the crowds. One noted gentleman from Connaught Square alleged the tram rails blocked his enjoyment of riding his horse & carriage into Hyde Park!

The section of Bayswater Road where our noted local would have complained of the tram tracks!

An unfortunate result of the newly built tramway was that many street carriages befell accidents trying to use the rails and numerous complaints were lodged with the transport commissioners. One of these incidents was briefly alluded to in the Houses of Parliament on the same day of it’s occurrence, Tuesday 16th April 1861.

Three other incidents were recorded by the Clerk of Notting Hill, Mr Page on 29th August 1861, where omnibuses broke their wheels on the tracks. These were so frequent a notice was issued advising drivers to keep their vehicles away from the Bayswater Road.

The Bayswater tram lasted just six months, far less than had been anticipated and largely due to the numerous accidents caused by the step rails. The opposition plus these numerous accidents soon forced the Metropolitan Road Commissioners to order Train to take up his tramway by 4th October 1861. The service ended during September of that year and the line removed soon after.

Ironically Bayswater Road remained in chaos for some time longer after the tram’s closure for immediately the Metropolitan Commission of Sewers began work digging the Ranelagh Sewer.

The Bayswater Line was actually a success despite conflicts with other road users. George Train’s lines – including Bayswater – were earning copious amounts of money – the fare was just 2d (two pennies) as this news cutting from April 1861 says:

The tramcars themselves were roomy and light yet sort of a ‘child’s Noah’s Ark.’ This would have been how the English viewed the gaudy colours and rather cheesy design of these American built street cars.

Tramway was apparently the wrong description. Some say it was essentially a railway built on top of a roadway. Yet they did not appreciate the amount of effort required to build the line which was very much like laying a modern tramway. In some respects these tramways were a bit like some of the UK’s early plateways which too had their rails raised in such a way that these were awkward to pass across.

The Bayswater terminus was located at this spot by the Porchester Gate building.

The line was opened on Saturday March 23rd 1861, and operated as a single track line with two passing places en route and two tracks at each terminus. The line was completely level at the Marble Arch end and led past the north side of Hyde Park down a gentle incline to Lancaster Gate before another, more gentle, ascent alongside Kensington Gardens to Bayswater.

Its not known where the trams were kept as there was no depot. They were probably stabled at the respective termini overnight. As for the horses it appears from records these were stabled at Inverness Mews.

Inverness Mews in Bayswater where the horses are said to have been stabled.

Besides the many problems that arose, the tramway was indeed very successful and soon George Train was planning a doubling of the track plus extension to Notting Hill Gate. It however seems the locals had by then had enough of the tramway and its awkward raised rails, and their cries of derision, along with those of the omnibus users, evolved into vociferous protests that grew quite strong and ultimately forced the tramway’s early demise.

The rails and sleepers from the Baywater tram were kept in store for a proposed new route from Pimlico/Victoria to Blackfriars/London Bridge. This is mentioned on page 67 of The Year-book of Facts in Science & Art (1862). That other line was never built hence the Bayswater tram’s final fate remains unknown.

For both the line’s 75th anniversary in 1936 and its centenary in 1961, a special exhibition was established in London. The star of the show at both of these was a large scale example of the ‘Princess Royal’ tramcar – this being a model loaned by Kensington Palace/London Museum. I have no idea what became of this one and only model of the Bayswater tramway. However I imagine that model perhaps came from the same maker as that model shown below of George Train’s Victoria Street tramway which operated 1861-62. 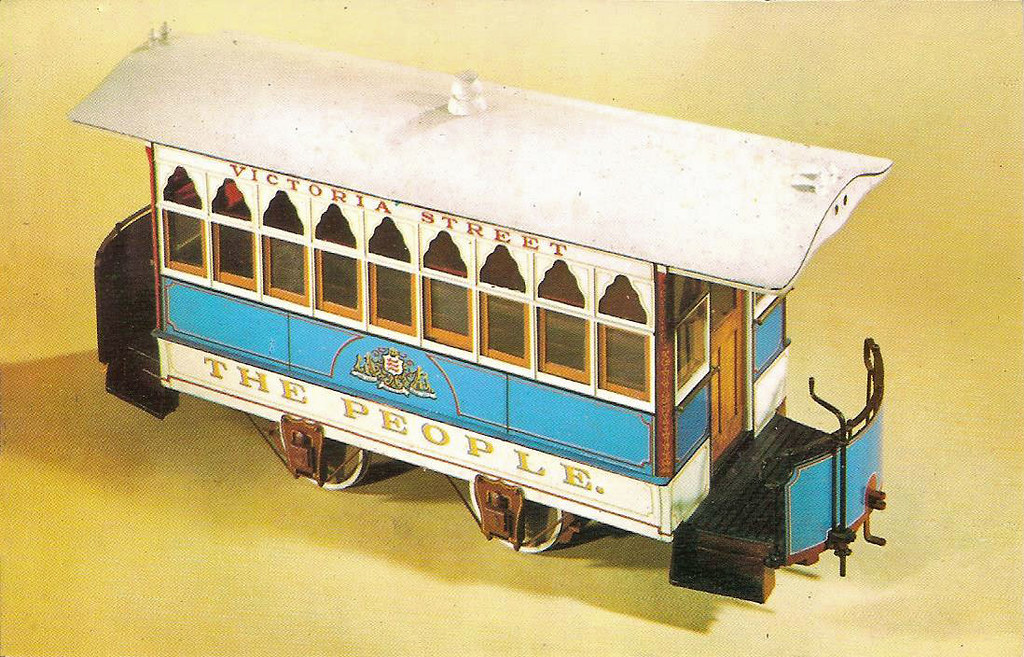 George Train’s Victoria Street tramcar which ran between Victoria station and Parliament Square. This model is in the possession of the LT Museum.

No photographs are known of the Bayswater Tram. Of the three early London tramways only the Victoria Street one was photographed. A copy of this photograph can be seen in the London Transport Museum collection.

Historical, London transport, Quirky, Tramway
Previous
Next
We use cookies on our website to give you the most relevant experience by remembering your preferences and repeat visits. By clicking “Accept All”, you consent to the use of ALL the cookies. However, you may visit "Cookie Settings" to provide a controlled consent.
Cookie SettingsAccept All
Manage consent