The 100th anniversary of the Central Line between Wood Lane and Ealing Broadway! The new line opened on August 3rd 1920. The route was actually built by the Great Western Railway however the Central London Railway was a shared owner and it had running powers over the route. Along with the other GWR branch to Greenford (and ultimately West Ruislip) today its all 100% London Underground.

The huge advantage in giving this new line a combined identity under the GWR and the Central London Railway’s banners was the fact it proved a beneficial relationship. The GWR could advertise fares and a dedicated onward route into the heart of the city – much like the arrangements the the Southern had with the Waterloo and City Railway. The difference here however was the interchange at Ealing Broadway was extremely done with ease, it was almost practically cross platform for those coming into London during the morning peak although there was the necessity of having to use the station footbridges in the reverse direction.

The above map is a little confusing yet it shows the extension to Ealing was thought of quite early in the existence of the CLR. The Bakerloo Railway is shown as it was in 1906, which suggests the Ealing extension was mooted at the time – in fact it was planned as early as 1905. Nevertheless the Euston extension of the City & South London is too shown and this opened in 1907! The CLR’s own extension east to Liverpool Street is shown as completed – meaning the map must have been published in 1912 – which it was.

Another aspect of this map is it shows North Acton as the intermediate station en route to Ealing Broadway. It was in fact East Acton that opened in August 1920. North Acton followed a few years later.

The ‘Shepherd’s Bush’ in the title of the new railway wasn’t actually the tube station in question but rather the area itself (roughly where the present Shepherd’s Bush Overground station is these days.) If the name had been applied as being technically correct it would have been the Ealing and Wood Lane Railway!

This is Shepherd’s Bush tube station in 1920, the year the line was extended over GWR metals to Ealing Broadway. The Shepherd’s Bush in the title of the new line however referred to the area rather than the CLR’s own station. The stupendous structure to the right is the former entrance to the British Empire exhibition. Source: Twitter

The first ever regular trips I made on the tube were between East London and Ealing Broadway more than sixty years ago thus (as I have explained in other posts) this section of the Central Line holds special significance for me.

Construction on the new line in fact began as World War One had got underway. As mentioned in Ferro Concrete Magazine for 1920, the over bridges for this new line were built in 1916. Nevertheless work soon slowed and the new formation was not fully completed for a while. But when work was sufficiently complete the GWR’s freight services began on the new line as early as 16th April 1917.

The delay in getting the CLR to Ealing Broadway was obviously due to the fact the war was still underway. Once that had ended planning and surveying as well as the construction of a new station at Wood Lane and new tracks north of Wood Lane had to be done before the CLR could even utilise its new route.

Where the M40 Westway now crosses over the Central Line is the location at which both lines (the Central London and the GWR’s route) merged, the former having come from Wood Lane and the latter from the the West London Line.

Most of the line between Wood Lane and the former junction with the GWR route now forms part of the White City station complex. In order to build this new station additional land had to be acquired on either side of the 1920s alignment. Ironically the work for White City station was begun in 1938 however World War II ensued and the plans were put on hold, recommencing once hostilities had ended and the new station was opened in November 1947.

Initially the section of track built by the GWR from the West London Line was double track as far as Wormwood Scrubs where the southern of the GWR tracks connected directly to the Central London Railway at Wormwood Scrubs. Remember this section had the unusual distinction of being both a location where the tube tracks crossed from right to left but also the advantage of that ‘wrong way’ working was to facilitate this direct connection without any need for a conflicting junction! The northern GWR track continued further west to a point where it was level with the Central London’s eastbound track thus once again a connection was made without incurring a conflicting junction. 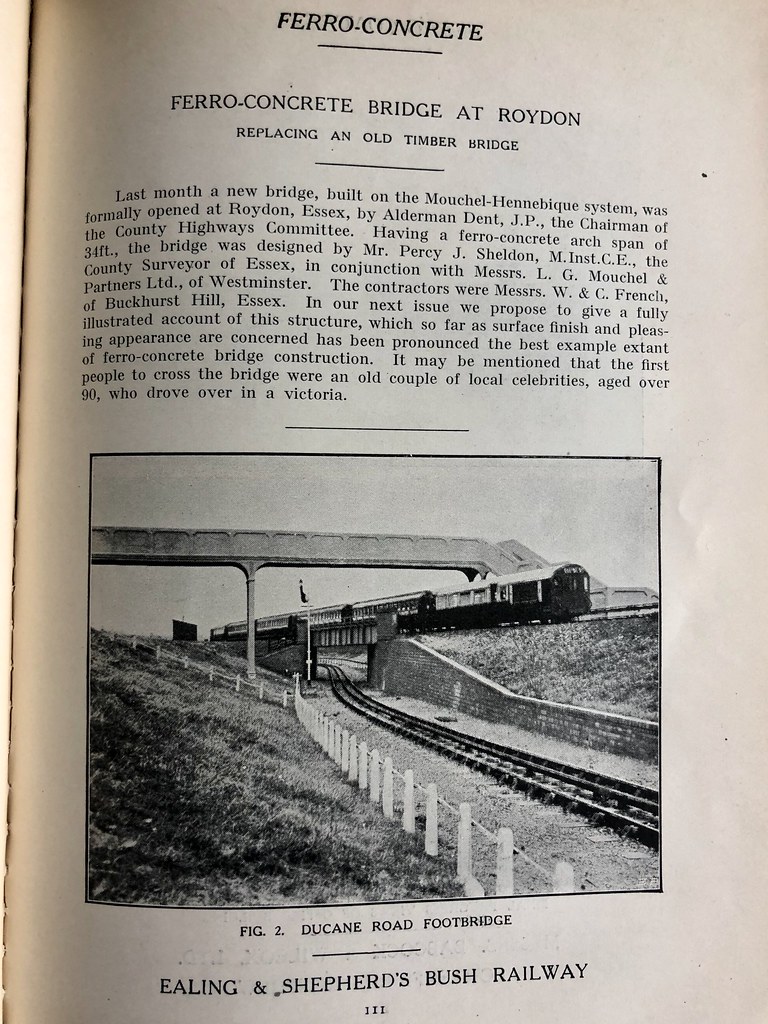 The concrete footbridge at Ducane Road where the CLR switched direction from right hand to left hand running. Source: Flickr

What has almost never, well certainly NOT been written, is by a quirk of fate this was the deep level tube system’s first ever flyover! The first ever built on the whole of the London Underground system was that at Farringdon on the sub surface lines where the widened lines switched sides.

Both the CLR trains and the GWR’s freight services shared the same tracks for sometime. This was necessary because two of the over bridges for the separate GWR tracks had not been built. I can find no exact date for when the work was completed however judging from aerial photographs the additional bridges were possibly completed between 1935 and 1938 when the GWR tracks were finally doubled all the way to North Acton. Its clear from an inspection of the bridges that different construction techniques were used for the earlier and later builds.

The Central Line’s route between White City and the GWR route as they were later formed independently of each other. Map based on that sourced from National Library Scotland

Its difficult to determine exactly how the tracks originally stood eastwards of Wormwood Scrubs. The reason for that is OS maps were not updated until after WW2, thus the bit of GWR extension from Shepherd’s Bush to Wormwood Scrubs remained merely an outline (in other words a projected route.)

1938 is the year when the GWR ceased all its use of the CLR’s tracks and in fact the junction to the north of Wood Lane had all its connections removed so the CLR and GWR tracks became entirely independent routes.

One of the problems of the new route was it had to share land with the Old Oak estate. This stupendous new housing estate which began construction in the early years of the 20th Century had the land partitioned so that the development was either side of the new railway and it is clear from the below street plan how the estate attempted to make full use of that land. One wonders how the estate would have in fact looked had a two track railway line been built instead of the four – especially as that is what it is these days!

The CLR/GWR route in fact formed the centrepiece (well almost) of the stupendous new Old Oak estate built in stages between 1911 and 1927. Source: Twitter

All the stations on the new extension (East, North and West Acton) consisted of simple wooden shelters, nothing special. The stations were essentially simple GWR halts.

East Acton opened in 1920 however North and West Acton stations were opened in November 1923. of these two only North Acton retains any of its original buildings. West Acton was rebuilt completely during World War II as part of the London Passenger Transport Board’s modernisation works.

North Acton station was the largest of all the stations on the new line. It had platforms for the GWR’s New North Main line from Paddington to Northolt & South Ruislip. Its said the NNML platforms were closed when the Central Line began its services to Greenford and West Ruislip.

The closure of the main line platforms at North Acton in due course gave an opportunity to facilitate an additional platform and this was opened by London Transport in 1992. The old eastbound platform is now mainly used for services that terminate at North Acton, although through trains do also use it from time to time.

The present West Acton station opened in 1940 and is a Grade II listed structure. Many would think by decree of the design used here it had been designed by Charles Holden. It is indeed a structure that employs design elements used by Holden however it was actually GWR’s own chief architect, Brian Lewis, who drew up the plans. Its said the station’s ‘dainty modernist design’ in turn influenced the buildings built for the Festival of Britain of 1951.

Ealing Broadway in 1939 with the CLR’s unusual three aspect semaphore signals evident. These were of the American railroad style. Note the centre rail system still in use at the time. Source: Twitter

The station at Ealing Broadway was constructed in the space between the GWR’s main station and that of the District railway. Formerly there were direct links to both the District and GWR tracks. Those to the GWR were taken out in 1938 whilst those to the District Line were removed sometime in the late 1990s.

The GWR station buildings at Ealing Broadway was demolished in 1961 and replaced by one with an office block as part of the oversite development. In recent years there has been further renewal at the station especially with a view to the new Crossrail service plus full accessibility. The Central Line platforms (as well as those of the District’s) are as they were built and these now provide quite a stark contrast with the brand new GWR station and platforms.

Historical, London transport, Tube
railway history
Previous
Next
We use cookies on our website to give you the most relevant experience by remembering your preferences and repeat visits. By clicking “Accept All”, you consent to the use of ALL the cookies. However, you may visit "Cookie Settings" to provide a controlled consent.
Cookie SettingsAccept All
Manage consent