Continuing the articles on the Ferrocarril de Sóller, with a further look at what was the rest of the Mallorcan railway network…

The attractive entrance to the FS’ Palma station, just off the Plaza de España opposite the Estacio Intermodal. Source: Pinterest

The network is now known as the SFM (Servicios Ferroviarios de Mallorca.) It combines the new Palma metro with its two branches, one to the UIB (Universitat de les Illes Balears/University of the Balearic Islands), and the other to Marrachí. Beyond here the railway continues as a commuter line to Inca before splitting to serve Manacor and Sa Pobla. These were originally diesel operated line when first reopened however the wires were later extended through Enllaç (Empalme junction) to Manacor. Last year the cantenary was extended to Sa Pobla and this video shows the ceremony inaugurating the town’s new electric services.

There have been proposals to extend the network back to Arta, once the furthest extremity of the old three foot FCM network but it seems the plans are on hold. The Majorcan Daily Bulletin says the island’s government (Govern Illes Balears) has an intention to see this section re-opened. There are numerous problems though. The Arta route has been built over in many places, even converted to a road, whilst bridges have been removed and cuttings filled in.

Nice pix of the train in Palma station with the large mural behind depicting a baby playing with some toy Sóller trains! Source: Twitter

What of the Sóller railway itself? It hasn’t suffered the wholesale cutbacks and decimation the main island network has although the Palma goods yard was closed down many years ago and is now a car park.

As explained in part one, the FS too had a partial decline. During the sixties its intermediate stations were quite run down and track was badly in need of maintenance. One partial reason for this was the closure of the FCM system and the cessation of freight between the two systems. For while it seemed as if the FS might too go to the wall. 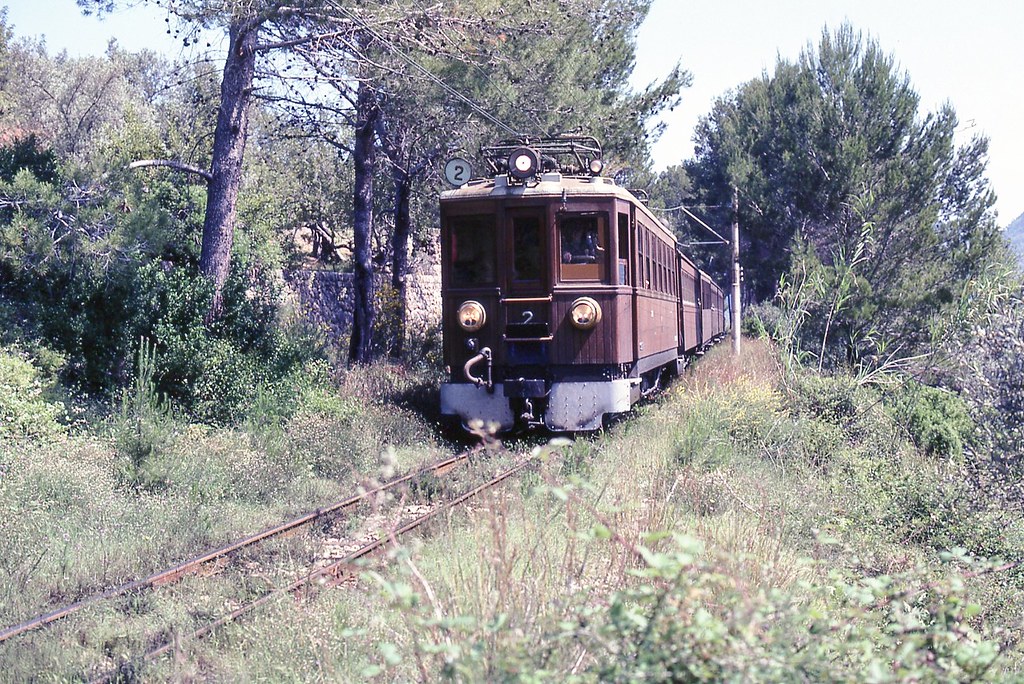 Even in the 1980s the line was in a rather sorry looking state….

The engine sheds at Palma were still used for the electric motor coaches but later were converted into a museum. However a need to provide substantial additional services due to the line’s booming tourism, the company had a tented structure erected over the remaining engine shed tracks which now forms the new Palma engine shed. This is used to accommodate the motor coaches when trains need overnight stabling at Palma.

Sóller train advert in the British Press during the seventies or eighties – it was one of the main broadsheets but I cant remember which.

In those latter days of the 20th century the railway was still managing to carry a fair number of locals because the mountainous roads between Palma and Sóller were still quite treacherous. That situation lasted until a parallel road tunnel through the mountains was completed in the 1990s. Since that road tunnel’s opening island residents using the Sóller line are now few and far between.

These days the railway carries just a handful of locals each day, most probably taking the cheaper bus instead or having their own car which they can drive between the two places in half an hour or so thanks to the new road tunnel that has been built through the mountains.

Sixties advert from my scrapbook (I cut it out of the Majorcan Daily Bulletin) showing the old fashioned style real sofas and high chairs used in first class.

One may wonder, what are examples of the many good things about the line? Many no doubt. The vintage atmosphere. The wooden bodied carriages and motor coaches are a huge draw. The run through the streets of Palma no doubt another draw but perhaps the biggest of all is the line’s traverse through the mountains. The summit level is 235 meters (771 feet) above sea level and the dramatic descent down to Sóller totals around 199 metres (about 637 feet.) The average gradient is about 1 in 45 or 23%. (The stats differ from various sources so I have used what I think are the most exact.)

The Sóller line isn’t a ‘Montreux Oberland Bernois’ or a ‘Bernina’ (in other words the FS is not in the top list of the world’s steepest adhesion railways) but in terms of being a pure adhesion railway, its pretty impressive in how it gains height quickly in the mountains. Some sections of line are 1 in 16 or thereabouts which is pretty steep. And when one considers its essentially an an interurban railway line that’s pretty impressive!

One other thing is the ‘wild west’ balconies the carriages have, which means people with enthusiasm (like Tim Dunn) can enjoy the ride in the open air. Source: Twitter.

Train entering the street section of line at Palma. The balcony is well populated. Source: Twitter

There’s one surprise about the railway – Palma’s station is in fact sited higher than Sóller’s! The difference isn’t actually that much but here are the stats – Palma is 43m (141 ft) and Sóller is 41 m (134 ft) above sea level.

Sóller station was built in 1606 thus its the oldest station in the world! Actually what happened is during construction in the 1900s the railway decided to use this very old building for its new station. The station is also unusual that its home to one of the world’s prominent Picasso and Miró art collections.

The trains on the Sóller line might seem ancient compared to the SFM but in fact modern technology is used to keep them working efficiently. This has included complete renewal of the motor coaches’ control systems so they are more efficient. The only traditional operation that has been retained in the motor coaches is the braking system. GPS is used on both the train and tram systems to help management keep track of the stock’s locations and progress.

The driver’s cab – with all its modern equipment. The unusual braking gear (the round thing with pipes see at the top of the picture) is the only traditional mechanism left in use and is operated by means of a handle on the side of the cylinder housing which the driver pulls down to operate the brakes. The trains power was formerly operated by a wheel. Source: Facebook

There has also been an upgrade of the permanent way and strengthening of tunnels and bridges in order to keep the railway serviceable for many more years to come. Here’s a video of work being done in one of the tunnels. The most recent of this was in the winter of 2016 – which involved major work on the Cinq Ponts viaduct (video) high above Sóller. Another video showing the helicopter.

New track waiting in readiness to be laid through the main tunnel in 2016. Source: Facebook

In the winter of 2017-2018 the line was once again with works focusing on the gradients above Sóller and the next phase of a programme of improvements in the main tunnel, this being to change the permanent way throughout this long structure to the more modern concrete slab type. It seems however this aspect of the work will take several winters as recent videos indicate there’s still ballasted track within the various tunnels. See this Facebook page.

The Sóller railway isnt controlled by signallers in any sort of traditional way. As a matter of fact it has never been and there were no signals of any sort (except at Sóller station) until perhaps the 1990s when a number of incidents including trains crashing into cars caused extra safety measures to be required especially at the various crossings and on the street section in Palma. However motorists in Palma continue to take reckless risks against the trains…

The section from Can Tambor to Sóller appears fully signalled even inside the tunnels but that’s really for the crossings on the final section as this stretch is steeply graded and the trains need ample time to slow down if those crossings are obstructed. The signals in Sóller station itself are only used when there are conflicting movements within the station or the line voltage is temporarily switched to 600v dc to allow tramcars to traverse across from the main repair sheds to the tramlines.

The management of the trains is achieved by means of radio communications. That however didn’t prevent two trains crashing into each other near the Cinc Cents tunnel during June 2005 on the steeply graded sections above Sóller. It is said both drivers saw the imminent collision and put the emergency brakes on before jumping out of their cabs. Injuries among the passengers from that particular collision were thankfully minor. The crash itself occurred at a somewhat low speed however it still put two of the line’s four locomotives out of action for months.

Motor Coach no.3 with new body at Sóller during 2006 Source: Internet Archive.

Crossings on the line plus the street section in Palma are protected by track circuits and signals that indicate whether the route is clear and some of the more busier roads have automatic half barriers too. Surprisingly there are some roads where there’s not even any signals of any sort for traffic although these are very quiet roads.

Well the FS are right in a way. There are 13 tunnels – no doubt built for the original line. But there is a fourteenth (built 1995-97 to the same profile as the others) which goes under the Ma-11 road and its 55 metres long (longer than the line’s shortest at 33m) because the traverse also involves passing beneath a roundabout. The FS specify there are 13 ‘longitudinal tunnels’ which means those that go through hillsides or the mountains so they evidently do not classify this additional 12th tunnel up from Sóller (or the 3rd one north of Bunyola if you prefer) as a true tunnel.

Son Sardina station. The line on the left is the SFM Metro line from Palma to the University. Source: Ferrocarril de Sóller.

In terms of train frequency, there’s not too many services actually. Although there is a fixed timetable involving about five or six trains each way (depending on season) there are many extra trains run solely for the tour companies. Whilst some do go as far as Palma, most operate between Sóller and Son Sardina where the tourist coaches can easily drop off/pick up their clients. Son Sardina station was considerably upgraded for this purpose and includes coach parking. No doubt the arrangement conveniently relives pressure on the considerably limited layout at Palma station.

Europe, Historical, Narrow Gauge, Quirky, Tramway
Previous
Next
We use cookies on our website to give you the most relevant experience by remembering your preferences and repeat visits. By clicking “Accept All”, you consent to the use of ALL the cookies. However, you may visit "Cookie Settings" to provide a controlled consent.
Cookie SettingsAccept All
Manage consent