Fowler’s Ghost was a 2-4-0 broad gauge locomotive designed for the Metropolitan Railway by Sir John Fowler. The engine made just one test run through Edgware Road station in 1862 and was a failure. There’s been much discussion whether the engine actually existed or even if it actually ventured onto the new Metropolitan Underground Railway. This isn’t a comprehensive do on the infamous engine, but at least some of the important facts are considered.

The Marylebone flyover approach shown below is the exact spot where the Ghost stood. Behind the wall is Edgware Road station. The A40 was built across the tracks & tunnel entrance in the 60s. 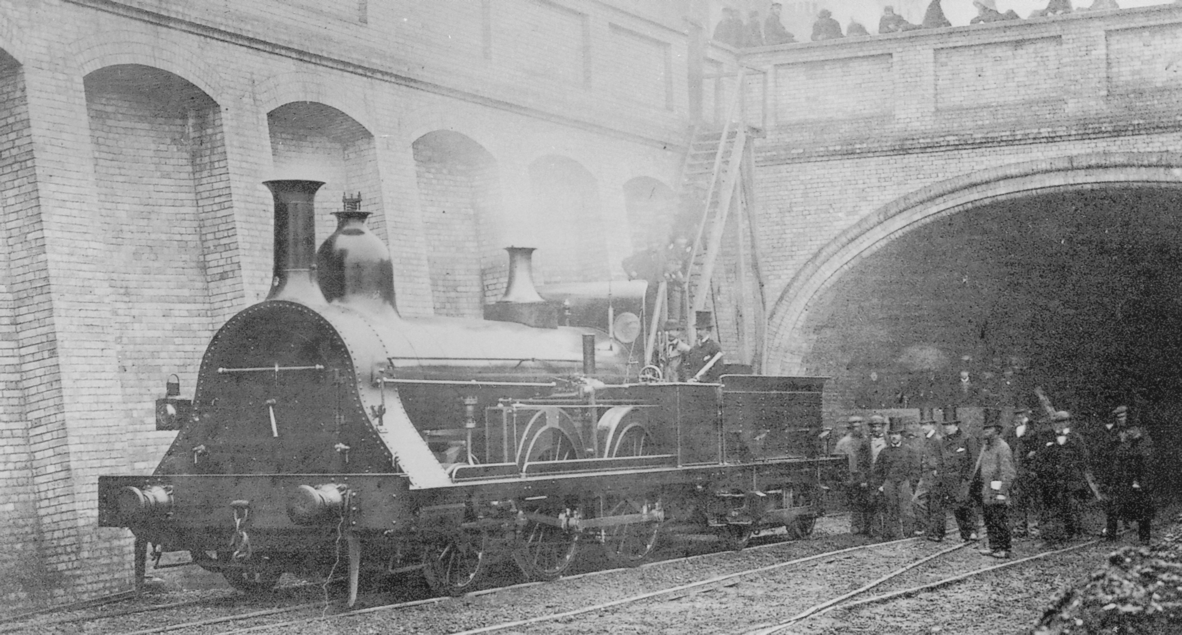 Fowler’s Ghost at Edgware Road (Stafford Street) in May 1862. Note the wide tunnel mouth. Stafford Street once passed over the tunnel entrance. Its now known as Cosway Street. Picture sourced from Wikipedia.

Fowler’s Ghost was built in 1861 and first trialled on the Great Western Railway at Hanwell. This was because the Metropolitan Underground Railway was not ready to accommodate any locomotives or rolling stock as little track had at the time been laid.

The one speciality of Fowler’s Ghost was it would be both a locomotive for main line and underground tunnel work. On the main line it would operate more or less as a normal locomotive, but on the underground sections the firebox would be closed and steam generated from heated firebricks within the locomotive itself. All good in theory but in practice it didn’t work.

Instead of a normal boiler it had a short one thus the remainder of the space was taken up by firebricks, with very short boiler tubes leading to the exhaust. Unfortunately the locomotive was quite prone to either being short of steam or in danger of exploding!

The covered way accommodating the A40 at right is shown in this view of Edgware Rd station. The following maps show the above site in 1893 and the present day.

Low resolution view from the 1893 OS map with the Fowler’s Ghost site ringed in red.

One would perhaps wonder why they tested the engine at Edgware Road in particular and not elsewhere during 1862. The simple fact would be that Edgware Road was the Metropolitan Railway’s depot for both locomotives and carriages. The old station site was rather larger than what we seen these days (some of the land has been built upon since including London Transport’s Griffith House) and the original site had locomotive, carriage sheds and other facilities. For many years there wasn’t anywhere else on the new Metropolitan Railway that would offer such generous facilities.

Thus it made sense to test the engine here because this would be the railway where its amazing engineering prowess (if it could be called that) would enable it to operate through the long tunnels without producing any sort of smoke. Not only that the fitters and the engineers (including its inventor Sir John Fowler) would be on hand to see how the engine performed and to take it into the locomotive sheds if so desired for any mods or alterations that would be deemed necessary.

Evidently it means somewhat contrary to popular opinion, the engine wasn’t tried just the once and then classed a failure. I’m sure it had been tested over a few days or maybe a week and then declared a failure.

Clearly one aspect that perhaps defined the difficulties with Fowler’s Ghost was that it had a tender, and that’s not a good thing in terms of the scope of the new railway it was destined to operate on. Thus its possible the one defining result from Fowler’s Ghost was any new locomotive builds for the Metropolitan Railway should be condensing tank engines instead. Clearly in the dark long tunnels when running in reverse (or tender first towards Farringdon) having a large tender up front wasn’t much good especially when the driver or the fireman needed to be able to sight the signals quickly, easily and safely.

Some observers comment on the fact the locomotive is working wrong road however at the time only the eastbound rail had mixed gauge. It wasn’t until much later in 1862 the line was complete with both gauges through to Farringdon. Fowler’s broad gauge engine could use that one complete dual gauge track and thus haul the standard gauge wagons nos 23 & 29 used for most of the early trial trips.

Its not known if the locomotive actually made it to Farringdon. Yes such steam operated trips using other engines of the standard gauge type had already been been made, but it seems King’s Cross was the furthest Fowler’s Ghost ever reached. Perhaps in view of the locomotive’s abject unreliability they dared not take it any further!

My animation skills might be a bit dodgy however it compares the 1862 picture with the site nowadays. The smart tunnel portal at the eastern end of Edgware Road station can also be seen.

The Metropolitan Underground Railway’s tunnels’ stylish portals can still be seen at the western end of Euston Square, Great Portland Street and Baker Street stations. All the eastern end portals have since been demolished except Edgware Road’s which is the one seen in the Fowler’s Ghost picture. This portal is however quite difficult to see from the platforms.

The tunnel portal once accommodated the tracks leading to the carriage & locomotive works thus the portal in fact formed a bellmouth. This view from Edgware Road station shows just a small part of the widened 1862 portal can still be seen, with the rest of it being obscured by the extension that was built in the late 1960s to extend the Marylebone Road through to the new A40 Westway.

Fowler’s Ghost was probably taken to the GWR’s Paddington New Yard for a while before being taken down the newly opened GWR/MR extension to Hammersmith sometime during 1864. Certainly its known the locomotive was to be found dumped in a siding at Hammersmith by 1865. The Metropolitan Railway made several attempts to dispose of the engine, and there were certainly offers for it. Issac Watt Boulton eventually bought it with a view to converting it to standard gauge. That however never happened and the engine was ultimately scrapped sometime in the late 1890s.

The site itself can be viewed on You Tube: Circle Line cab ride Hammersmith – Liverpool Street.

Clip from the video showing the covered way and tunnel portals.

Historical, London transport, Quirky, Tube
railway, tube
Previous
Next
We use cookies on our website to give you the most relevant experience by remembering your preferences and repeat visits. By clicking “Accept All”, you consent to the use of ALL the cookies. However, you may visit "Cookie Settings" to provide a controlled consent.
Cookie SettingsAccept All
Manage consent