Its seventy years since the Liverpool Street – Shenfield electrification first began. The scheme was officially opened on 20th September 1949 and cost £8 million. This scheme was tied in a fair bit with the Manchester Sheffield Wath scheme and indeed the electric locomotives for that scheme were first tested on the Liverpool Street lines. Work on the Shenfield lines began in the late 1930s but was halted by the war. This is just a quick tribute to London’s first successful main line electrification scheme (discounting the very short lived LBSCR Crystal Palace lines.)

Eastern Region diagram showing how the electrification would have been undertaken – eg Fenchurch and Liverpool Street to Shenfield.

For decades most of the services on the line operated between Liverpool Street and Gidea Park. A few peak hour services operated to Shenfield – as opposed to nowadays where most operate to Shenfield with just a handful to Gidea Park. Shenfield was generally served by outer suburban or semi fast trains to either Southend or Colchester.

The veritable Class 315s – soon to be scrapped.

The line is now seeing its third generation of electric units. The current, the Class 315s, are being withdrawn and will soon be no more. They should be completely gone by the end of 2019 and totally replaced by the Class 345s (Crossrail/ElizabethLine.)

Some of the recent changes have now seen that Liverpool Street station is now totally ‘underground.’ The track layout has been compteley remodelled between Stratford-Pudding Mill Lane to accommodate the Elizabeth Line services. The bay platform at Ilford has been withdrawn whilst the sidings at Chadwell Heath have long been taken out. The one oddity from 1949 to remain is the additional track section from Ilford Flyover past Manor Park to the Forest Gate junctions.

Ilford Car Sidings, once the domain of the 306s, are no longer in use.

All the stations are currently being remodelled for Crossrail (Elizabeth Line) with Ilford being the last of all to receive any XR modernisation.

Since the Stratford rebuilding in the 1990s the lines have had bi-directional capability – I recall one train going wrong line (eg the down electric) between Forest Gate and Stratford due to an obstruction on the up electric line.

The Class 345, which will eventually become part of the cross-London Elizabeth Line services to Reading. 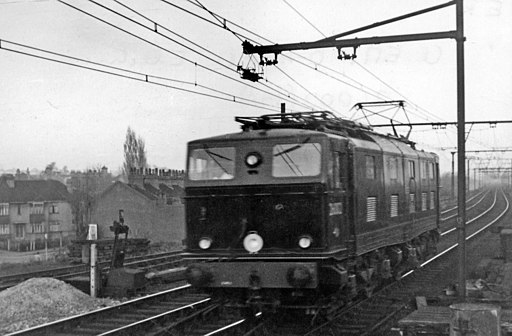 I certainly remember how the Liverpool Street-Shenfield line was in its early days. I first used the line about 1959, ten years or so after it had been inaugurated. The Class 306 were quite an innovation in electric trains though by the time I used the services the 306s pantographs were being moved from the front motor coaches to the middle trailers.

The first 306 at Chelmsford on the inaugural day of electric services 11th June 1956.

Until 1981 the 306s were the main stay of the line however they could too be found initially on the extension to Chelmsford and as my experience shows they also undertook the odd duty to Southend Victoria (electric services began 31 December 1956) in lieu of the Class 307s.

The interior of a Class 306. The strap hangers were certainly unusual for main line electric stock in the UK.

A 306 entering Gidea Park station from the sidings in readiness for a service to Liverpool Street.

Perhaps the biggest major infrastructure on the route (besides station rebuilds) was the Ilford flyover. The main reason for this was to give electric trains direct access to Ilford depot (officially called Ilford Car Sheds as denoted by the big blue enamel signs at either end of the depot.) The flyover enabled the electric trains to access the depot without fouling the main lines. There are few pictures of its construction however here’s a page on this.

The original 306, number 001, worked right through to 1981 when these venerable electric multiple units were finally withdrawn. The only unit to be preserved was 306017 although its currently said to be in a poor condition.

In terms of station rebuilds, these were Stratford (south side), Maryland, Forest Gate Manor Park. However Ilford, Seven Kings, Goodmayes, Chadwell Heath and Romford remained essentially as they were. Gidea Park received a partial rebuild. All the stations acquired the standard lighting, train indicators and signage used for the scheme however. There were newly brick signal boxes at most stations as well as one for Chadwell Heath sidings.

This interesting document details the electrification scheme for the line, and also shows it was originally as envisaged as being electrified from Fenchurch Street too, something that didnt happen.

The Fenchurch Street part of the scheme envisaged a shuttle service from Stratford, for which a bay platform was built. This largely unused bay platform eventually became the Docklands Light Railway’s first Stratford terminus.

London transport
Previous
Next
We use cookies on our website to give you the most relevant experience by remembering your preferences and repeat visits. By clicking “Accept All”, you consent to the use of ALL the cookies. However, you may visit "Cookie Settings" to provide a controlled consent.
Cookie SettingsAccept All
Manage consent