This isn’t a write up on some rap character called Nig Banda who hails from Lymington! Its more about a scale map I have of the railway branch from Brockenhurst to Lymington and a practically forgotten reprographic company known as Nig Banda.

The entire Lymington Town/Pier railway plan laid out. Difficult to take a clear picture from high up on a ladder!

In a recent big sort out I found my huge scale plans of the Lymington Pier branch in Dorset. These plans were drawn by British Rail’s Southern Region architects department at Waterloo. I think the plans been taken out of the envelope just a handful of times in the fifty years or more since my acquisition. I had purchased the plans as a schoolkid in the sixties with some aspiration to build a model of the branch.

I wasn’t even any sort of Southern expert but this was meant to be the start! And that only because there were two major seismic events that had recently occurred in terms of the Southern. I was meant to be a Great Western fan because Warships and Westerns were what I regularly saw. Those two Southern events held my attention because that was the year 1967. The first was the old Isle of Wight railway system had been reopened in a form one could describe as an annexed London Underground system. The second was steam had ended on the Southern. No more Battle of Britains, Merchant Navies or West Countries.

Yes I was a nutter in the sixties – just as I still am now! Another hair brained idea of mine in those days was the one where I apparently ordered a van load of coca cola from a local stores. I don’t know how that came about…. think it was actually a misunderstanding. Some hours later my dad was livid cos a van drew up outside and the guy was bringing out crates and crates of coca cola. Two crates were in the event purchased whilst the rest went back 🙂

Details of the surveys used to create the Lymington Branch drawings.

Anyway I received a walloping from my dad for having acquired these huge architects drawings! He said ‘what the ‘ell are you going to use these for’ and demanded to know where I had got the money. I expect the funds for the drawings had been sourced without permission from my mum’s purse. – hence a well deserved walloping.

In retrospect British Railways were actually the suckers for having accepted my scrawled requests – remember I was just a schoolkid with ideas well beyond my station! I had requested details of the best plans available of the Lymington Pier branch and they wrote back to me with some details and costings. I made my choices and duly paid by postal order then waited for the plans to arrive. Gawd! When they did arrive they were just sooo big! There was barely anywhere the plans could be opened out to its fullest extent. It’s why the plans have stayed in their envelope all these years.

The envelope the plans came in was 16 in by 1ft wide whilst the postage cost 16 pennies (3 x 4d stamps.) The main drawing when folded was just 14 inches by 11 inches. Fully opened it was eight feet long by three feet four inches wide.

The plans also came with architects drawings for a new signal box at Lymington Pier. This was indeed built in about 1955 though I believe it did not last very long. It had been reduced to a ground frame sometime in the seventies with full control of the section taken over by Lymington Town signal box.

Detail in the bottom corner of the signal box plans.

The plans also show a branch from Lymington Town station heading south west to the town quay. I am not sure of the history of that branch and its not shown on any other maps I have inspected. However it clearly did exist as the survey was done in 1961. I have tried to find pictures that would show the rails on the quay itself but to no avail so its unknown how far these rails actually went.

The pans were derived from Neg. No. 53,659. Possibly Network Rail or the NRM has the original negatives.

Obviously the negative used to print the plans was of the same same size, note British Railways’ reference number, which was Neg. 53,659. These weren’t the normal kind of negatives but rather a heat printed plastic film upon which the images were burnt onto. An advantage of these was they could be modified simply by using razor blades to scrape off areas that were to be altered and then any alterations or additions could be added by means of Rotring pens. Just to make it easier some departments simply drew the new areas on and hatched the old or removed areas. That however wasn’t a very professional job compared to that using razor blades!

Very often big companies would have their own printing departments and the railways were no difference. When British Railways Southern received my order they no doubt sourced the plans from their negatives department and then had the positive finished product printed off ready for dispatch. I know because I used to work in one and was responsible for alterations and additions to the plans and ensuring they were printed as per requirements.

And this is where Nig Banda comes in! Its quite possible the materials for these plans used by British Rail were probably from a company known as Nig’s of Colindale. Nig’s were one of the most reputable suppliers for this stuff. The architect’s department I worked at was for a number of years and in fact one of my early jobs there was as a runner taking negatives from the main architects offices to the printing department some distance away, then wait patiently as the drawings were printed out on huge machines, rolled them up put them tubes and took these back to the architects offices. The extra work such as altering plans, additions, updates and other tasks such as colouring plans to show zones alterations etc came later once I had undergone the necessary training.

All the papers and negative rolls I encountered in my job (including that known as Jetafilm) were from Nig Banda. Their name was on all of the cardboard tubes in the printing department. In those days it was fantastic technology although nowadays its obviously a very outdated system.

The large Nig Banda tube which I still use to store some of my rolled up plans and drawings.

I kept a number of Nig Banda tubes rather than throw these away as they proved useful for the scale drawings and maps I purchased for my researches. The tube pictured is by now 45 years old or more and once contained ‘Jetafilm.’ This is actually the unprocessed negative. It wasn’t subject to light like normal photographic negatives were so could be handled in a well lit room. Images were copied onto the negative via a special machine that created a sort of intense light, not laser, more like halogen, to print the negative itself.

Nig Banda’s label denotes the tube as one for their ‘Jetafilm.’

We could copy straight from drawings and make negatives or copy the original architect drawings done on industrial tracing paper onto negatives. The originals would then be filed away and the negatives used instead. We had several machines, each doing different jobs and using different processes. Generally the thirty inches wide material was the most commonly used although wider material such forty inches and upwards were used when necessary. Nig Banda’s paper rolls and negatives were very expensive stuff even in those days.

Nig Banda were based in Colchester. The company had begun life in 1907 as E. N. Mason Limited, based at Arclight Works, Cowdray Avenue, Colchester. They were bought by Ozalid’s of Loughton who were specialists in reprographic materials among other things. Ozalid’s changed the name to Nig Masons, having merged them with Nig Manufacturing of Colindale, another Ozalid’s acquisition.

How did Nig Banda come about? ‘Nig’ obviously came from Nig Manufacturing of Colindale. I presume the Lymington plans were thus printed on paper produced at Colindale. That factory was closed and production moved to the Mason works in Colchester and the company renamed Nig Masons. In 1972 Ozalid’s bought out another company, Block and Anderson and merged it with the Nig company. Thus the ‘B and A’ (for Block and Anderson) became ‘Banda’ and thus how Nig Banda came into being. 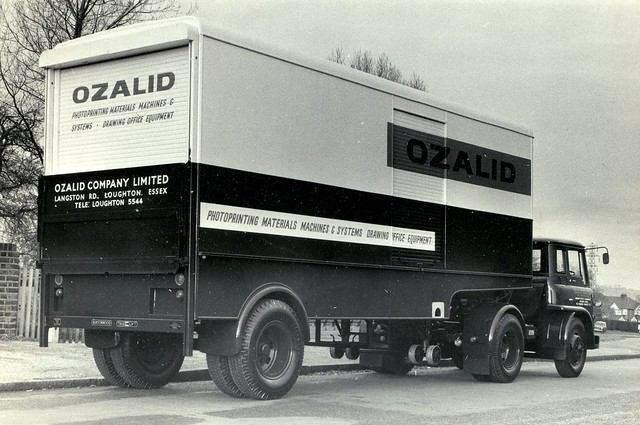 Ozalid’s were the parent company for Nig Banda. This is one of Ozalid’s lorries. Source: Flickr.

I am not exactly sure when the end came for Nig Banda, however it seems the company was wound up about 1986. Ozalid’s were bought by the Dutch company Océ in 1978 and it was likely eventual restructuring that determined Nig Banda surplus to requirements. Océ itself is now part of the Canon Group.

Historical, Quirky
railway history
Previous
Next
We use cookies on our website to give you the most relevant experience by remembering your preferences and repeat visits. By clicking “Accept All”, you consent to the use of ALL the cookies. However, you may visit "Cookie Settings" to provide a controlled consent.
Cookie SettingsAccept All
Manage consent