BR 45292 at Marylebone in April 1948, on what is possibly a Manchester express. Note the lower quadrant signal midway on the platform! It can also be seen in the picture featuring the women porters. Source: PicClick (The page in question has now been deleted and the URL used for another image. An archived image is used here.)

Bullied double decker mock-up Marylebone 1949. One wonders why they chose Marylebone for this, if the coaches were destined for the Southern… Source: Twitter

A better shot of one of the 1952 DMU cars. Source: Twitter

The 10.00 to Manchester hauled by A3 Pacific No. 60063 Isinglass. This is the west side and the houses here have all gone. Source: Wikipedia

This is the Institution of Locomotive Engineers 50th Anniversary exhibition at Marylebone goods yard in 1961 with E3059 (later 85004) and the short lived, experimental, gas turbine loco GT3 . Another view shown below. Source: Twitter. (Note: Tweet deleted thus an archived image is used.)

E3059 and the short lived gas turbine loco GT3. May 1961. A Hymek can be seen next to the GT3. Plenty of other views in the following link. Source: Flickr

The location of the Institution of Locomotive Engineers exhibition would have been right by Lisson Grove itself where people entered through a large archway that formed a feature at the time on the corner of Lisson and Rossmore Roads. This You Tube video shows the archway as the Duke of Edinburgh arrives to open the exhibition. It also shows a Warship (D829) on a demonstration run. It seems there were two ‘Warships’ as another report mentions D867.

In some of the films eagle eyed viewers will spot the huge Lisson Grove power station’s chimneys – this too had a large yard served off the lines into Marylebone. In this You Tube video there’s a great view of the power station and the Duke’s entourage arriving through the aforementioned archway.

There were many other locomotives at the exhibition including Midland 1000 (as Exhibit 1), Mallard (as Exhibit 2), Duke of Gloucester, Evening Star, and many diesels including Class 31, Class 33, Class 42, Class 44, Class 45 (No.28 later 45124) Class 55 (D9003), a carriage from the 1962 tube stock and one from the brand new ‘A’ stock. Here’s a short You Tube video. This rather better and longer You Tube video shows most exhibits including cab interiors of the Hymek etc.

Not quite Marylebone nevertheless its the Flying Scotsman with a special railtour on the Great Central to London. It was the line’s twilight years and express services would soon be no more. Source: Twitter

I am not sure of the occasion however its an engine driver being interviewed. It may be the Flying Scotsman trip, pictured above. Source: Twitter. (Tweet deleted thus an archived image is used.)

Rolling Stones 1964. The route served Marylebone until 1987. I have pictures of RM’s on Route one at Marylebone. Source: Twitter. (Tweet deleted thus an archived image is used.)

Sorry everyone! I hope most of you are a Fab Four fan – because this has to be a Beatles biggie! Their first feature length film A Hard Days Night is noted for its scenes filmed at Marylebone station. Its probably what made the station more famous than at any time in its entire history! You can scream and shout all you like but its undoubtedly an important part of the station’s history and there are scenes of great interest.

It is said filming began at Marylebone station on 2nd March 1964. Other reports say the Beatles left Paddington on a five coach special to Minehead for the first scenes to be filmed and the scenes at Marylebone were done on the 5th March! The rather more serious researchers insist it was Marylebone the Fab Four used as a departure point for Minehead, not Paddington. There are many conflicting reports however this short report from Six Bells Junction suggests the trains left from Paddington – and at one point the Fab Four were forced to disembark from Westbourne Park station to avoid hordes of fans waiting at Paddington.

Anyway one way or the other the four spent nearly an entire week shuttling from London to Minehead filming various rail based scenes. Many of the establishing shots were taken at Marylebone because the scenes also involved a chase through the streets around the station itself. No doubt the fab four’s fans were there too – in their thousands!

Not quite Marylebone! Rather its Crowcombe on the way to Minehead. Its however a nice establishing shot for this section. Source: Twitter

Dashing through the Porte Cochère into the station. Source: Twitter

Paul & John dash under the Porte Cochère into the station. Source: Twitter

The location of these two photographs happens to be the current Marks and Spencers in the station itself. This was once the ticket hall.

Another view of the same scene. The interest however are the LNER notices on the right and the modern wooden bench underneath these! Source: Tumblr

Ringo and John looking to see if there’s an all-clear! Source: Twitter (Note: The Twitter account has been suspended/deleted thus an archived image is used here.)

Paul waits to film his scenes featuring this use of a ‘disguise.’ Source: Twitter

Ringo, George and John – either resting or just foolin around. Source: Twitter

Running for the train! John, George & Ringo in the lead. Source: Twitter

Beatles and Patti Boyd rest in a guard’s carriage during a break in filming. Source: Absolutely 60s

The station in 1966 with the Melbury House block visible. This was once a headquarters for the British Transport Commission, British Waterways Board, the British Transport Docks Board, as well as British Railways. Note the western side platform and canopy which have long since disappeared. Source: Wikipedia

As the plaque outside the station tells us, the ornate roof over the road is known as a Porte Cochère. Here are some images on Wikipedia’s pages showing more views of the station’s unusual overall roof.

A Hard Day’s Night was no doubt the station’s last gasp for glory before the powers that be decided its main line express services to the north should end. These were progressively reduced until a skeleton service remained between Rugby and Nottingham. That too was destined for the chop…

The last part of the once mighty main line out of Marylebone to Lancashire, Lincolnshire and Yorkshire goes to the wall. Services ended May 1969. Source: Twitter

In 1970 Marylebone became the subject of a Doctor Who episode – The Silurians. Note the passengers as they drop to the floor of the station. I love the one of the woman collapsing by the rail timetable – its almost as if the woman has just taken a look at the train times and said ‘oh gawd these train services are just so crappy’ before taking a tumble against the timetable in question 🙂

Doctor Who The Silurians 1970.

Marylebone once had a substantial goods yard and carriage/locomotive depots. By the seventies it had all shut down and the land was therefore ripe for new housing development. In due course this became the Lisson Green estate…

The station was used for ‘One of our Dinosaurs is missing (1975.) Source: Twitter

A much better view of the old west side platforms and Melbury House. The entire land to the right (plus one main canopy and one side canopy) has been lost to development. Source: Flickr. 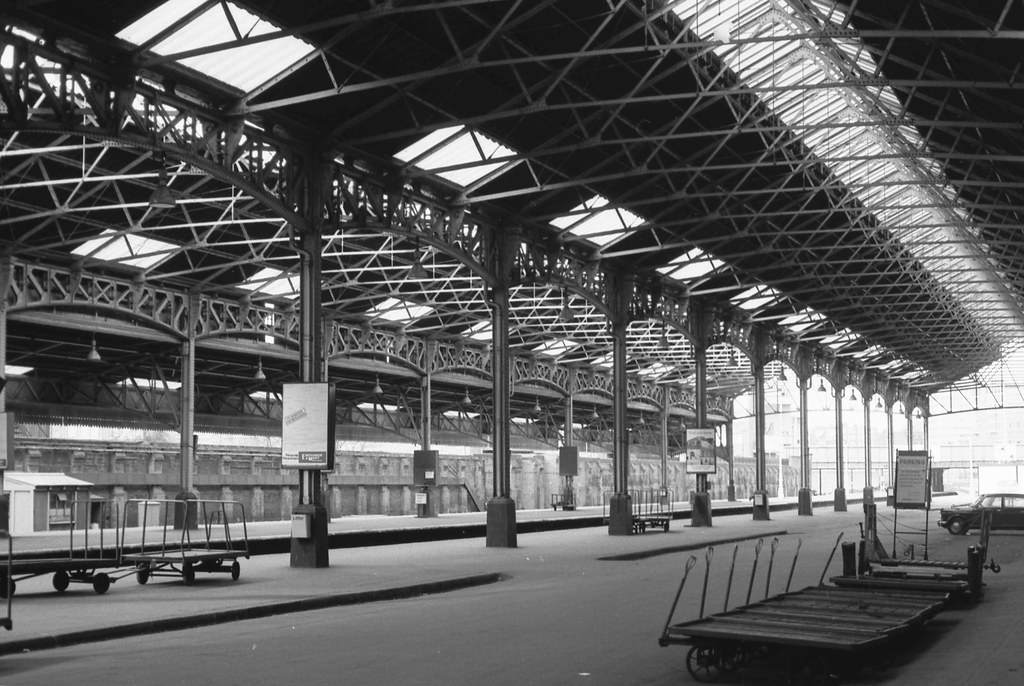 Badge commemorating the return of steam at Marylebone 1985. The locomotive was Sir Nigel Gresley. Source: Twitter

Historical, London transport
railway history, railway station
Previous
Next
We use cookies on our website to give you the most relevant experience by remembering your preferences and repeat visits. By clicking “Accept All”, you consent to the use of ALL the cookies. However, you may visit "Cookie Settings" to provide a controlled consent.
Cookie SettingsAccept All
Manage consent