I thought I’d do a gallery of Milwaukee Road scenes! Most are from Flickr pools – and not even featured on Google’s pages. Many fascinating pictures – and some very lucky guys who captured these scenes! 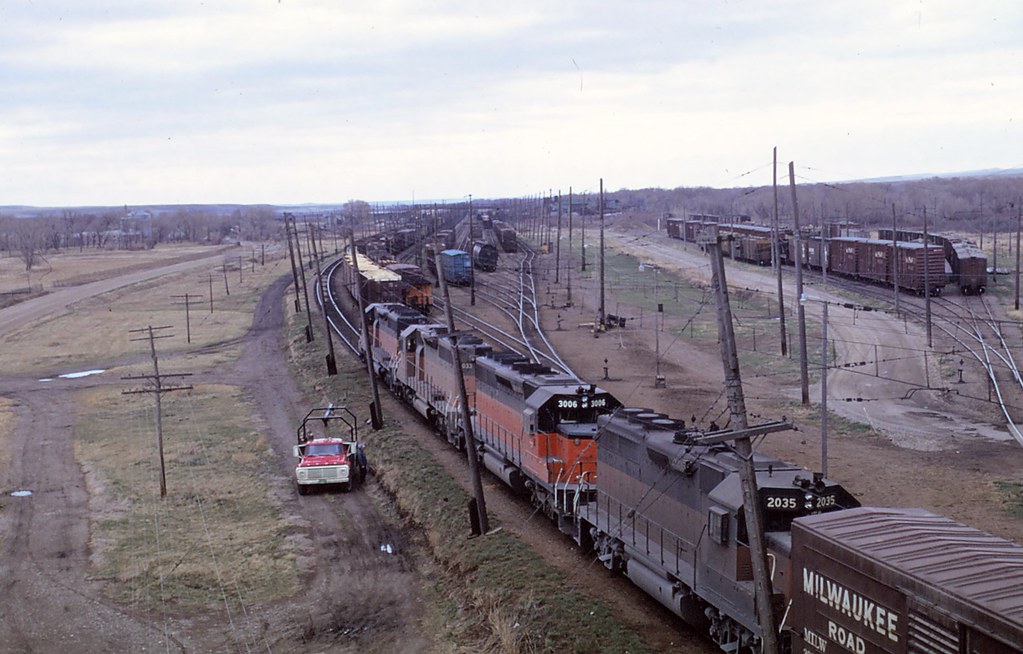 The eastern terminus of the 438 miles of electrification at Harlowton. Large marshalling yards and locomotive depots were found at this location. Today there’s nothing left – except the depot building and the roundhouse which has been preserved. Source: Flickr 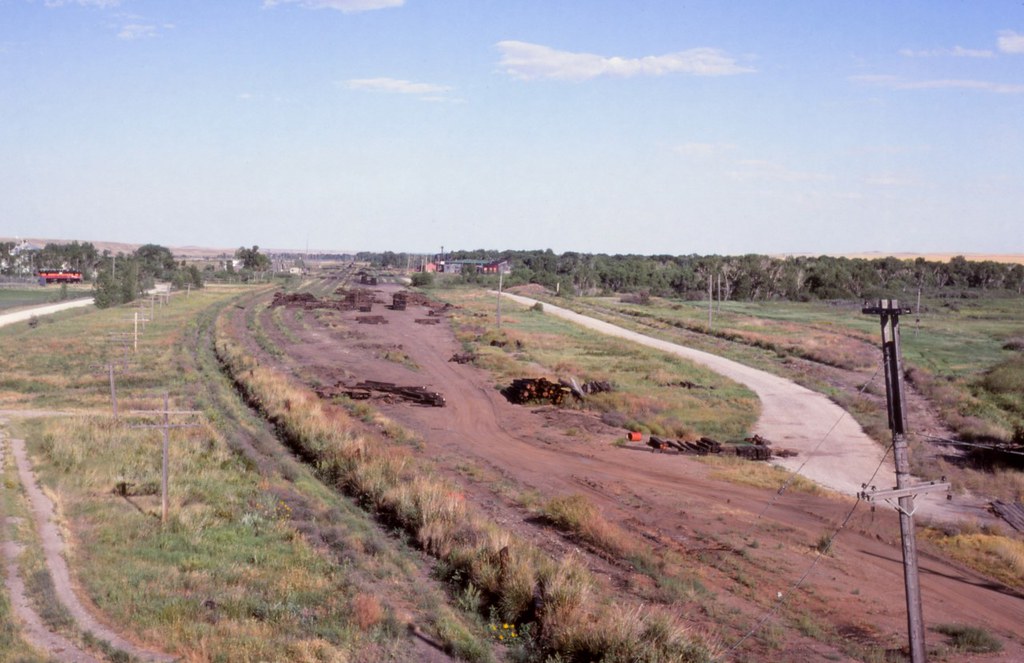 Harlowton in 1983 three years after the Pacific extension had closed. Some track can still be seen in the distance – no doubt the Milwaukee Road were still hard at work pulling up the rails of their once highly esteemed two thousand miles of western extension! In hindsight it would have been cheaper to have kept it open! Source: Flickr 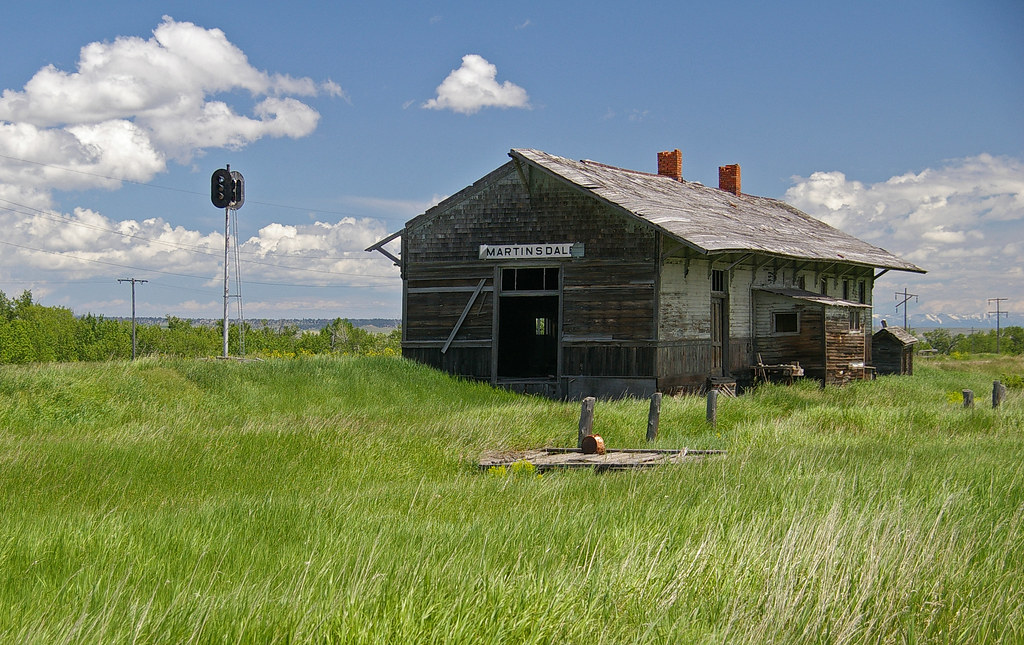 Martinsdale on the way to Loweth and the first of the three Rockies division summits. This picture was taken in 2011. Its understood the building has now been demolished despite many peoples’ concern. Source: Flickr

The first summit, not too far from Harlowton (alt. 4167ft), crossed the Belt mountains at Loweth (alt. 5799ft.) The line then descended to Lombard (alt. 3984ft.) The second, the most significant, was across the Continental Divide at the Pipestone Pass (alt. 6347ft.) A long gradual descent ensued westwards to Superior (alt. 2727ft.) The third summit was at the St. Paul Pass (alt. 4170ft) before descending to Avery (alt. 2402ft.) 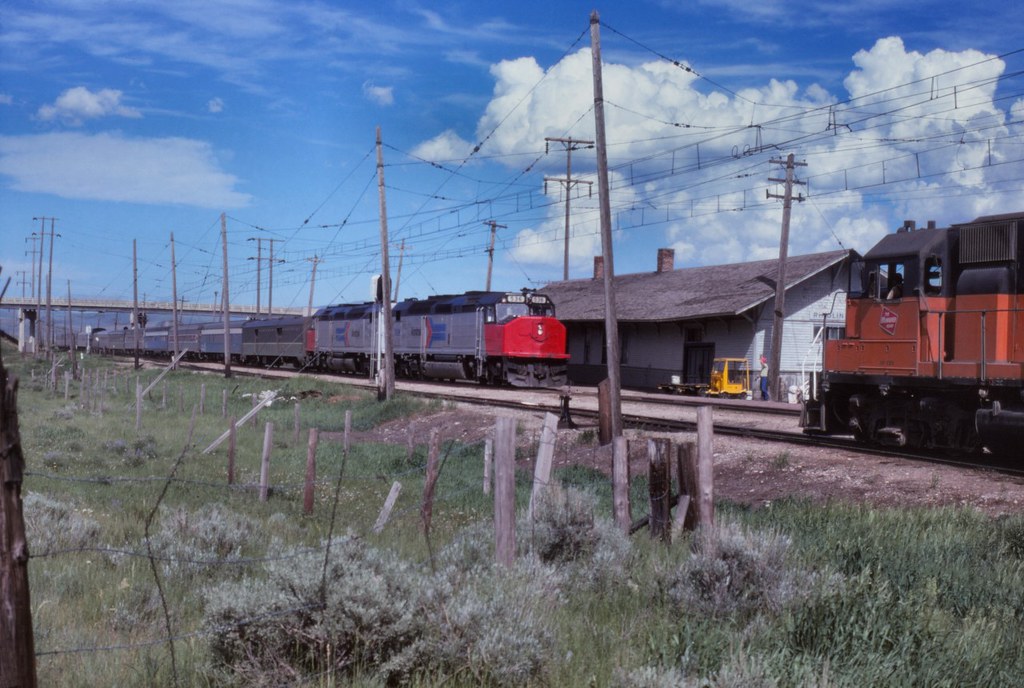 The Hiawatha returns to the Milwaukee Road in 1974! This is Ringling just nine days after electric services had ended. The train is Amtrak with the North Coast Hiawatha – and this service used the Milwaukee Road for a whole month while repairs were undertaken to flood damaged track and a collapsed bridge near Livingston. Note the concrete bridge – one of several examples across the line that are no longer extant. Source: Flickr

Its said the depot at Ringling was demolished in 2017. It appears that may have influenced the decision to take the one at Martinsdale down too. 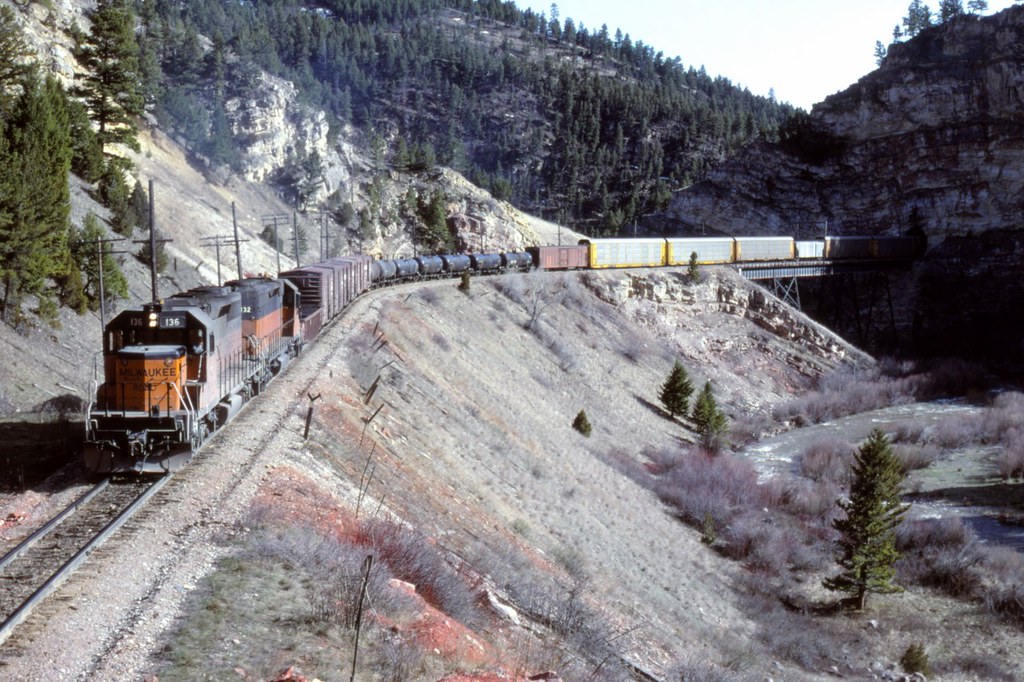 Near the famous Eagle’s Nest trestle and tunnel in Sixteen Mile Canyon (these are just visible in the distance.) This eastbound train is heading towards the shorter Eagle’s Nest tunnel. The wires have gone and less than a year before the line closed. Source: Flickr 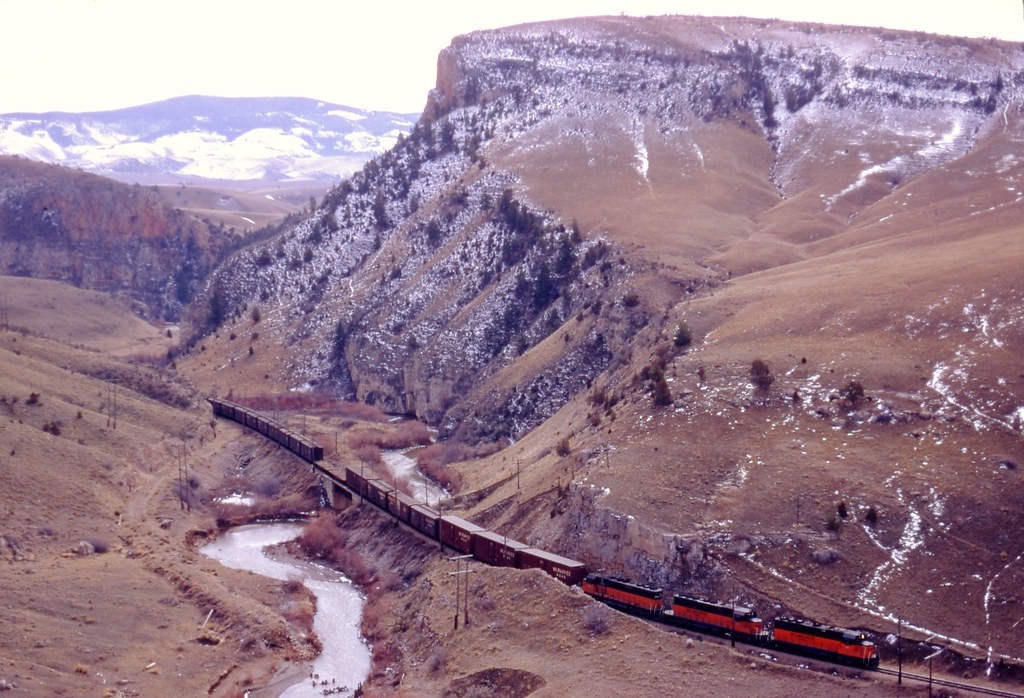 Ringling marks the section towards Sixteen Mile Creek and Lombard. The company called it the Montana Canyon in their literature. This is a nice shot of a westbound freight in the canyon near Lombard. Source: Flickr 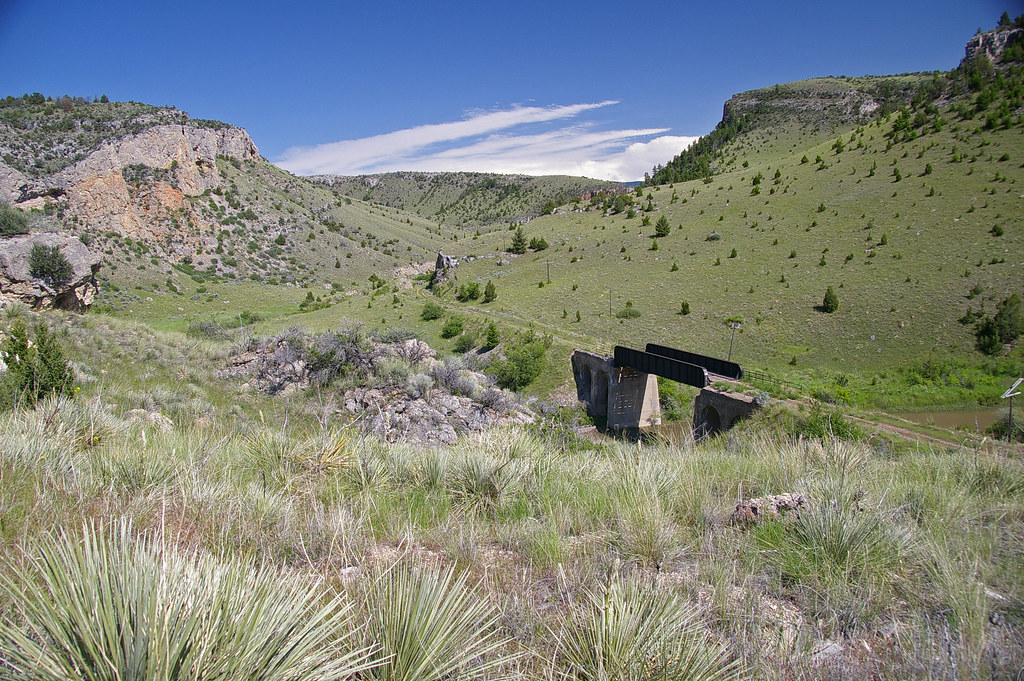 The entrance to Sixteen Mile Canyon near Lombard thirty years after the line shut. Its interesting how different this is from other parts of the canyon which is extremely rugged. Source: Flickr 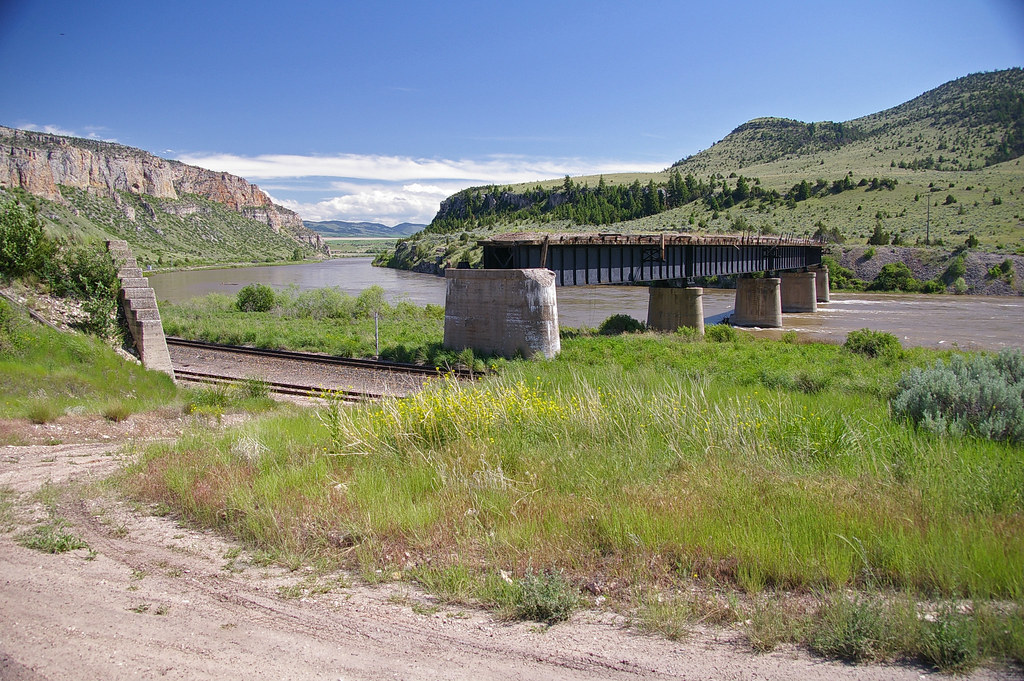 The bridge across the Missouri at Lombard. The line performed a large ‘u-turn’ as it turned from the river towards Sixteen Mile Canyon – and the bridge was the middle bit of that curve. Lombard was once a very busy location with different lines coming through here and junctions linking these up. A town grew up around the area’s railroads, it had a hotel and post office but it has all disappeared. Source: Flickr 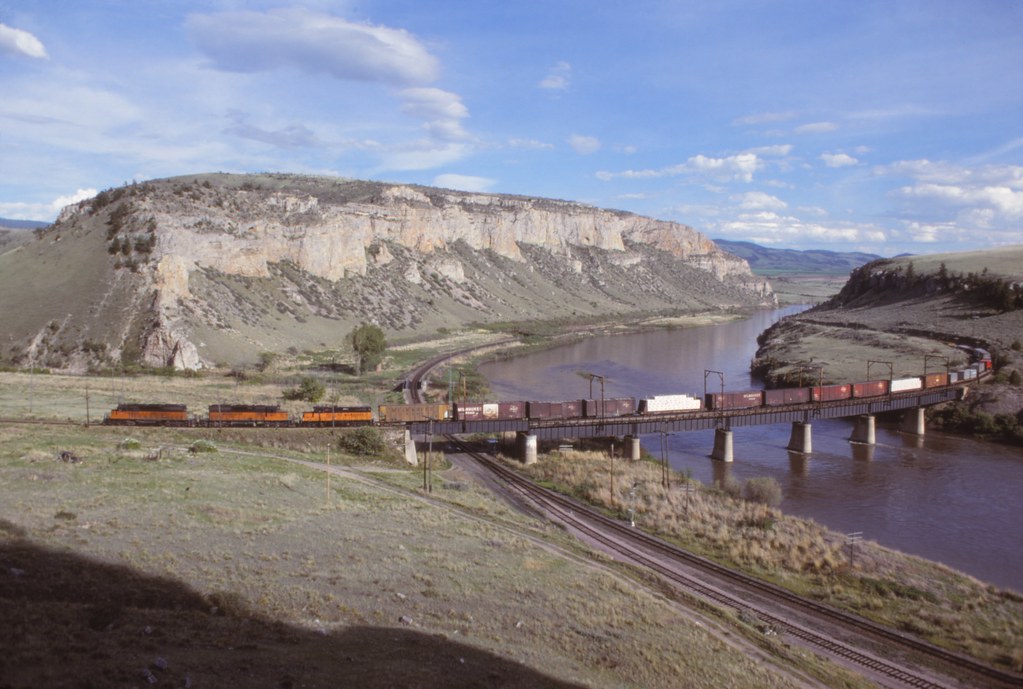 Lombard in the line’s final year during 1979. The former Northern Pacific route (now Burlington Northern) can be seen. Source: Flickr 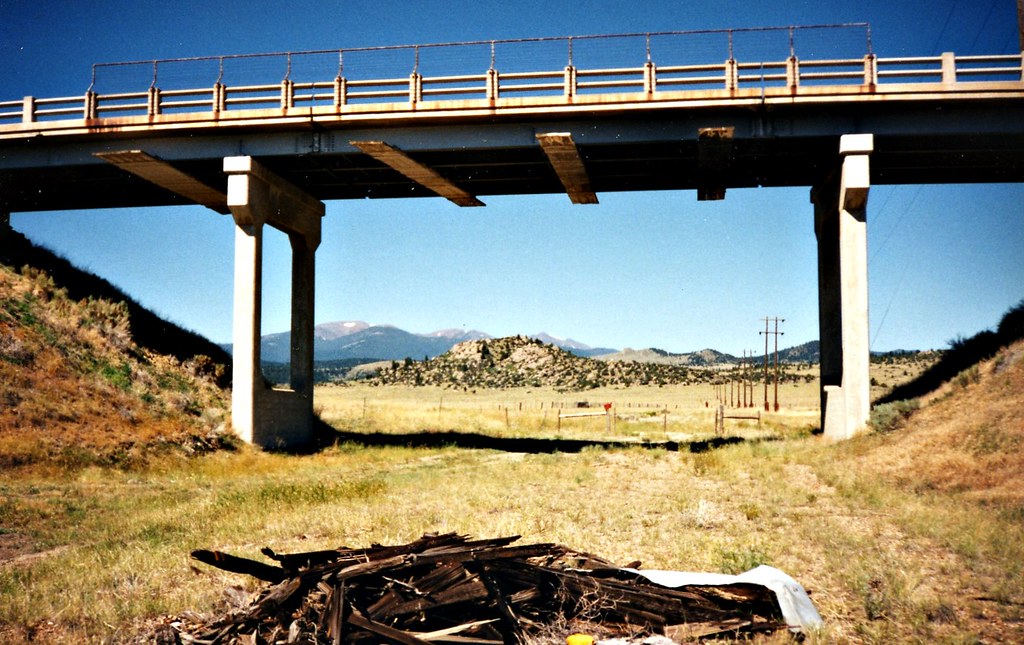 Former bridge over the Milwaukee Road at Vendome. It was demolished about 2009. Source: Flickr

This is the same exact location today as seen on Google. The bridge and approach embankments were removed thus the highway now crosses the former railroad on the level. Google Streets. 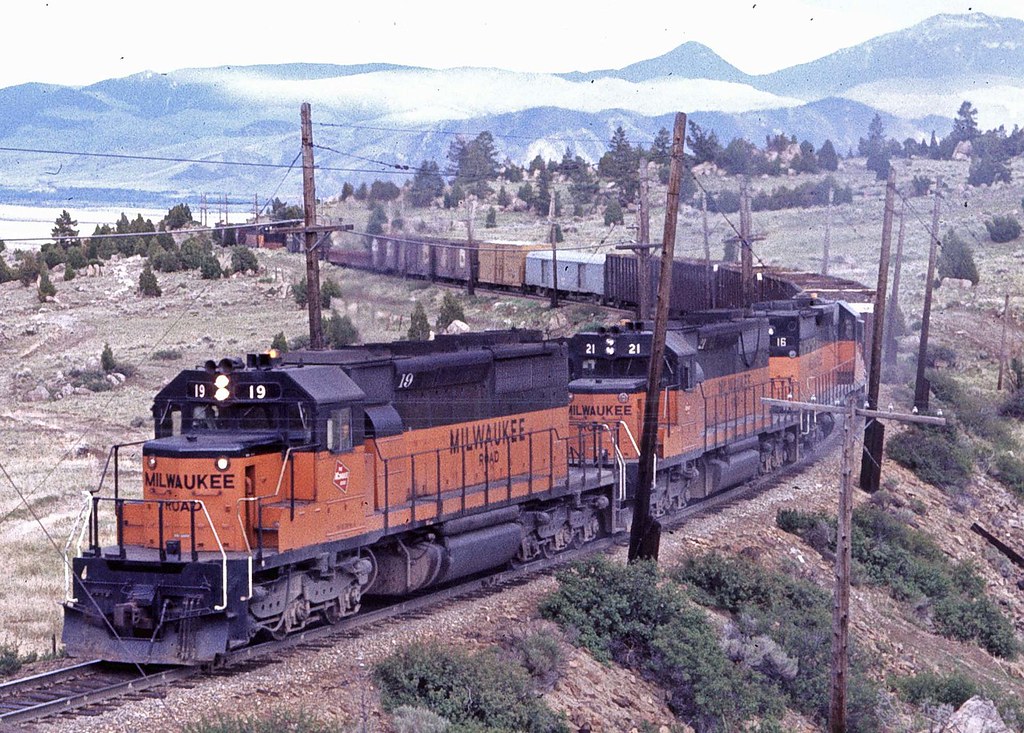 Westbound freight negotiating the reverse loop at Vendome on the long ascent to the summit of the Pipestone Pass. Source: Flickr 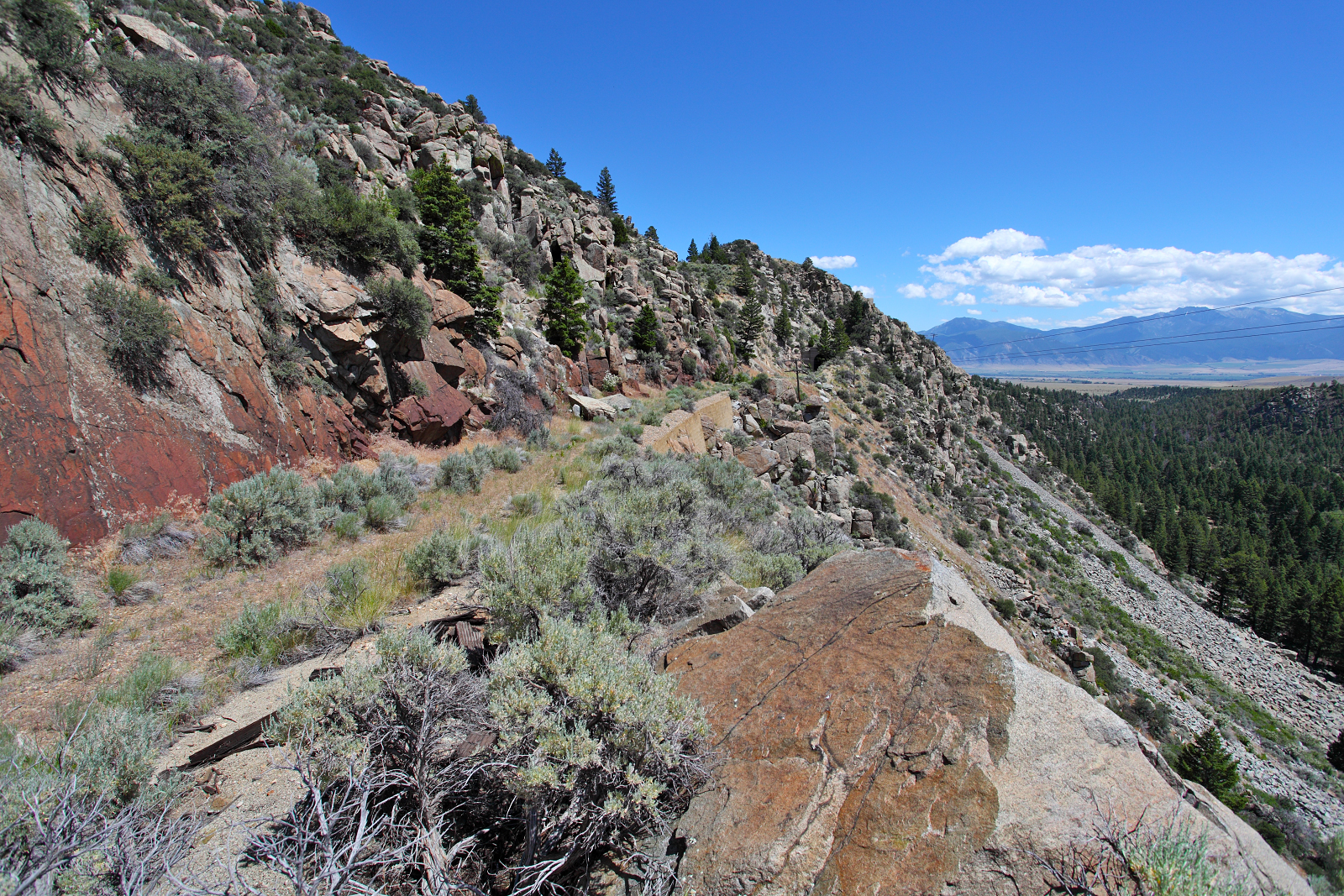 Evocative 2015 picture of the former Milwaukee Road high up in the Rockies at Fish Creek. The Fish Creek tunnel can just be made out in the distance. Source: Flickr

Despite these spectacular shots Fish Creek is a hard location to reach. What’s more its on private land thus special permission has to be obtained from the area’s landowners. That was the case when the line was operational and that is still the case even now its closed. This picture of the Olympian Hiawatha in 1953 (as seen on Twitter) is a good example of the picturesque aspects along this section. 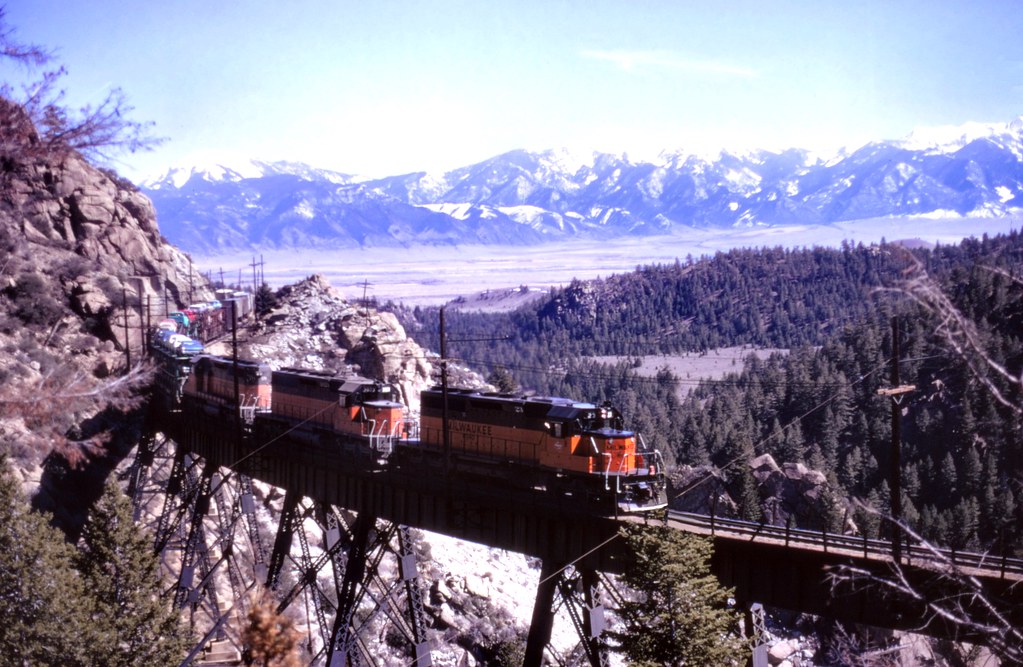 Love this picture! Its a great shot of Fish Creek trestle in the last days of electrification – although this is a fully diesel working. The height the line’s climbed on its ascent from Piedmont is obvious. There’s a good bit more climbing through Grace and Donald via the Pipestone Pass in order to cross the Continental Divide. Source: Flickr Great shot of a Little Joe from the adjacent highway as the locomotive is about to cross the Continental Divide and through the Pipestone Pass tunnel – before descending the other side towards Butte Source: Flickr 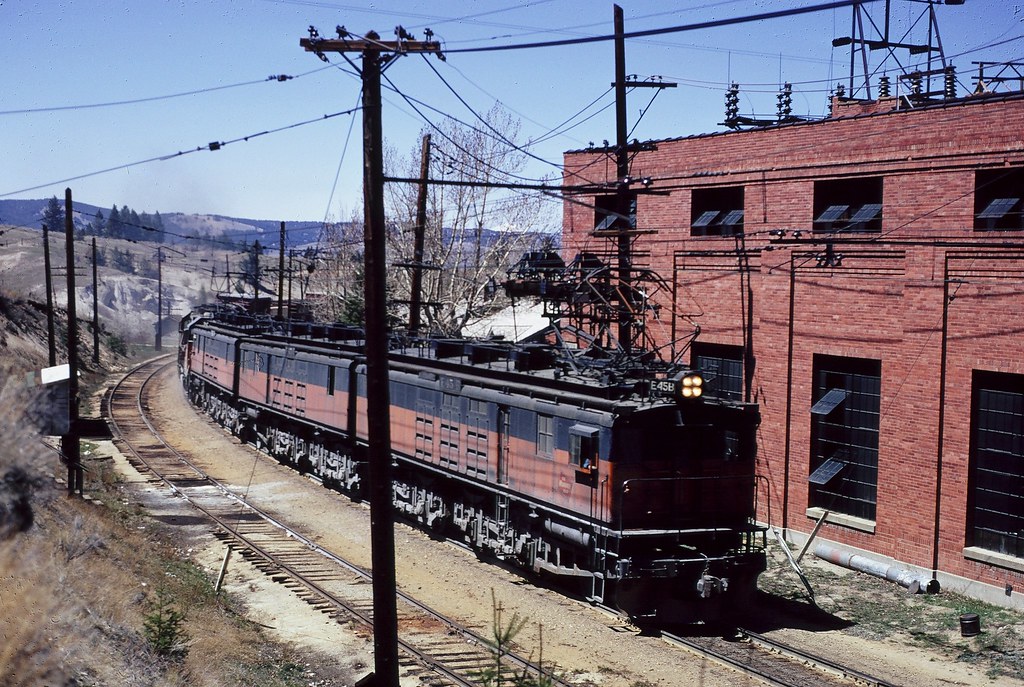 Janney at the other end of the Pipestone Pass. This is perhaps the best shot I have seen of this location. The line is still quite steeply graded here for there’s still a considerable elevation difference between here and Butte. West of Janney the route took in a lengthy detour in order to make the going for trains somewhat easier. Source: Flickr

In terms of Janney the same location can too be seen on Google Streets as I have featured in my Along the Milwuakee Road #1. If one clicks on the Google Streets link and moves westwards in the viewer (or simply click for a direct link) the spot one now arrives at is practically a track level view of the above image! 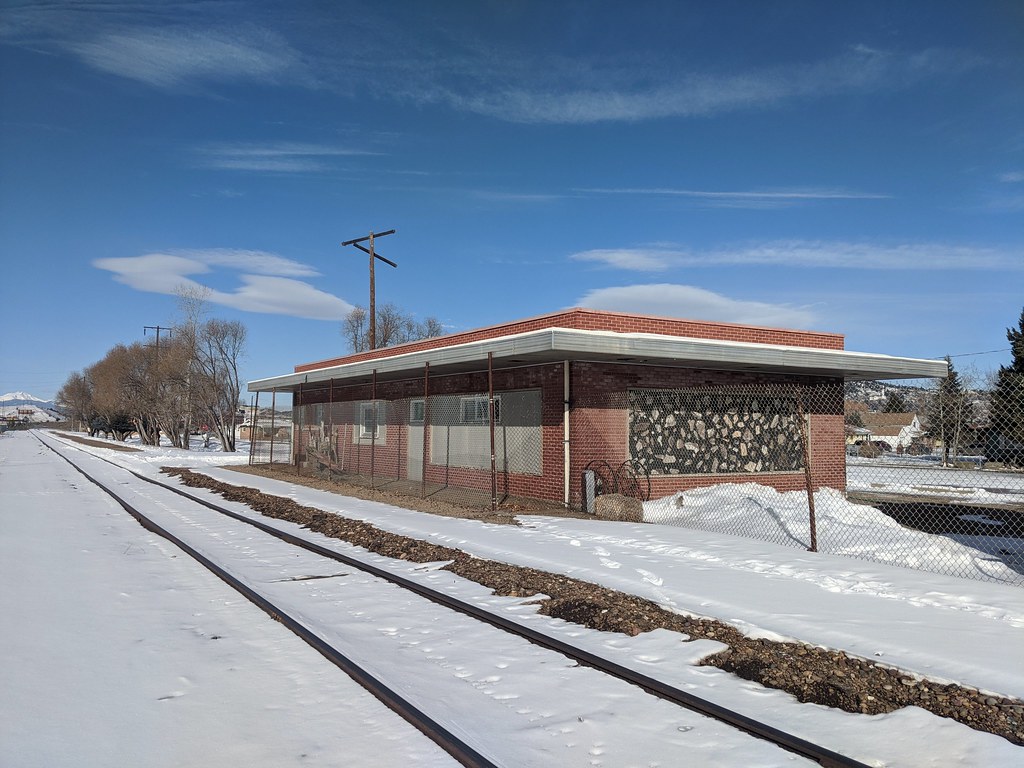 Its not well known however in the drive to reduce costs the grand terminus at Butte was replaced by this simple affair on the through tracks to the south of the city. This was used for three years to 1961 when the Milwaukee’s transcontinental expresses ceased. Source: Flickr

The above former station building, which is sited on Josette Avenue, can be viewed on Google Streets. 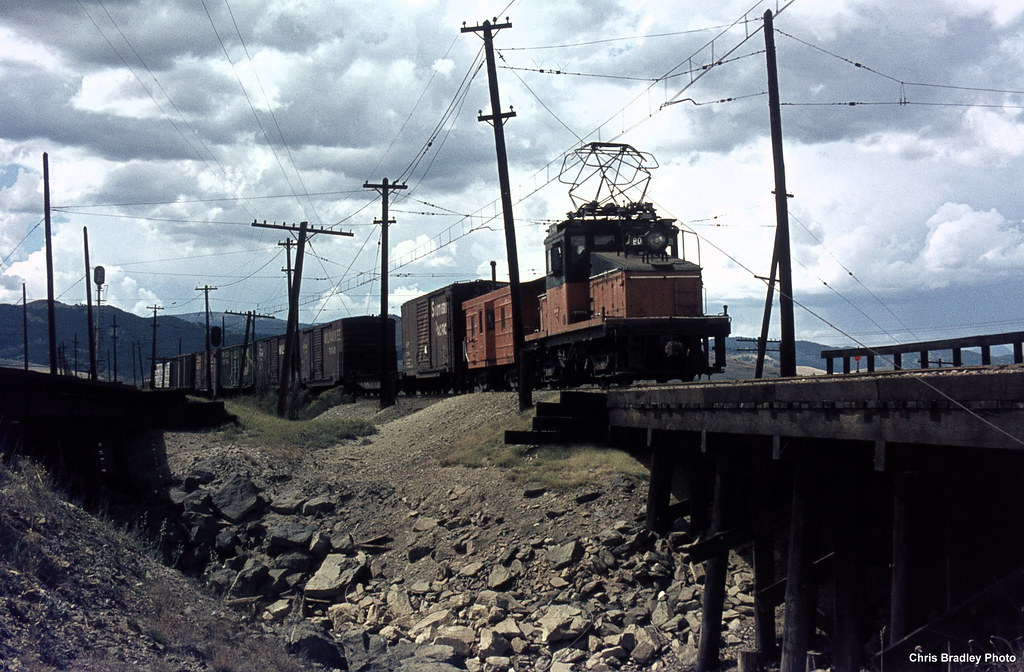 Great shot of a steeple cab at Silver Bow Canyon. These machines were meant to be shunting jobs but were invariably seen on duties as far away from Deer Lodge such as here and at Butte. Evidently it seems they could whip up a fair speed! As a matter of fact several of these were out-stationed from Deer Lodge thus shunter M80 was usually based at Butte. Source: Flickr 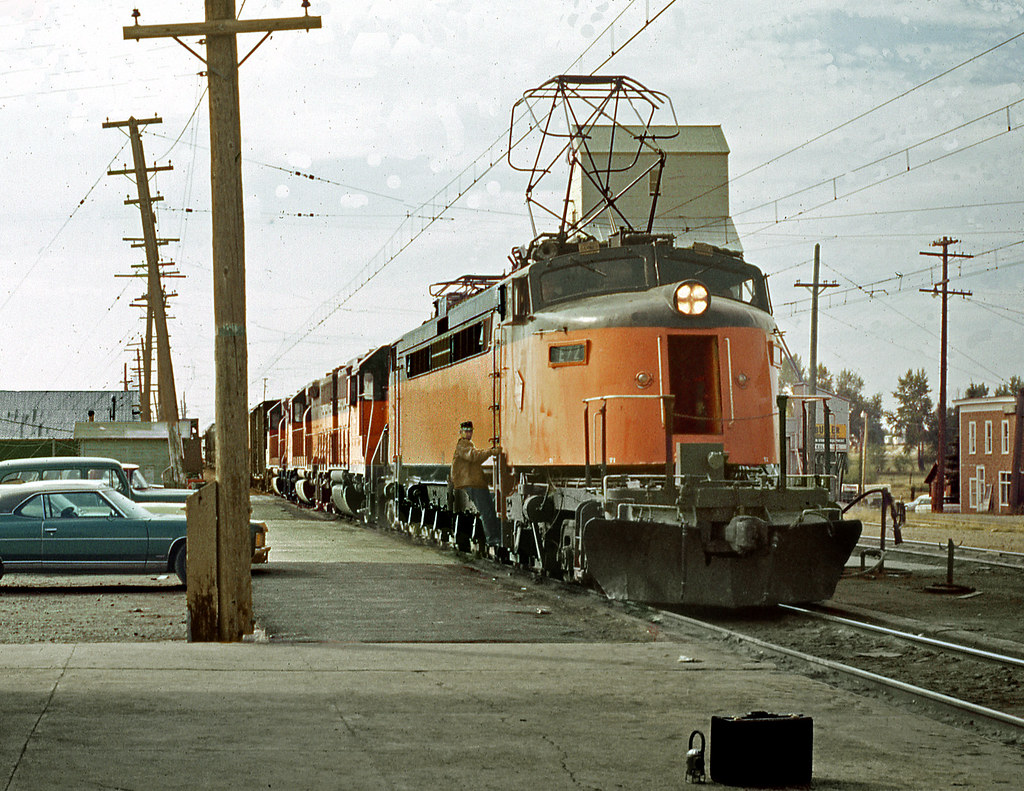 A simple but evocative view at Deer Lodge. Notice the train dispatcher’s lantern and ‘grip’ (the large heavy case.) Judging from the view this is a westbound freight opposite the Deer Lodge depot. Source: Flickr

Deer Lodge is practically the midway point between Harlowton and Avery – thus this feature is continued in Part Two.

America, Historical
railway history
Previous
Next
We use cookies on our website to give you the most relevant experience by remembering your preferences and repeat visits. By clicking “Accept All”, you consent to the use of ALL the cookies. However, you may visit "Cookie Settings" to provide a controlled consent.
Cookie SettingsAccept All
Manage consent