The second part of this special gallery of Milwaukee Road scenes! Most are from Flickr pools – and not even featured on Google’s pages. Many fascinating pictures – and great photographers who captured these scenes! There’s a bonus feature at the end of this post! Drummond between Deer Lodge and Missoula. One of the few stops on the Rockies division to retain semaphore signals. Source: Flickr 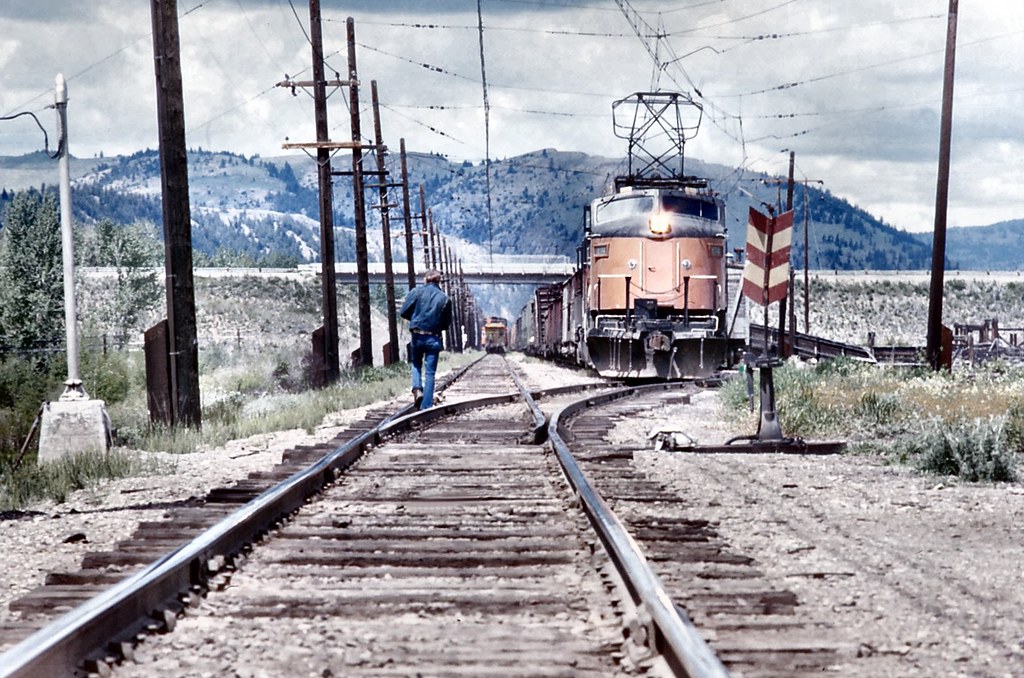 The sidings at Drummond were west of the depot. The bridge is the Pintler Veterans Memorial scenic highway. Source: Flickr

Here’s a view of the Drummond site from the Pintler Veterans Memorial scenic highway – as seen on Google Streets. Difficult to believe this is the same location! 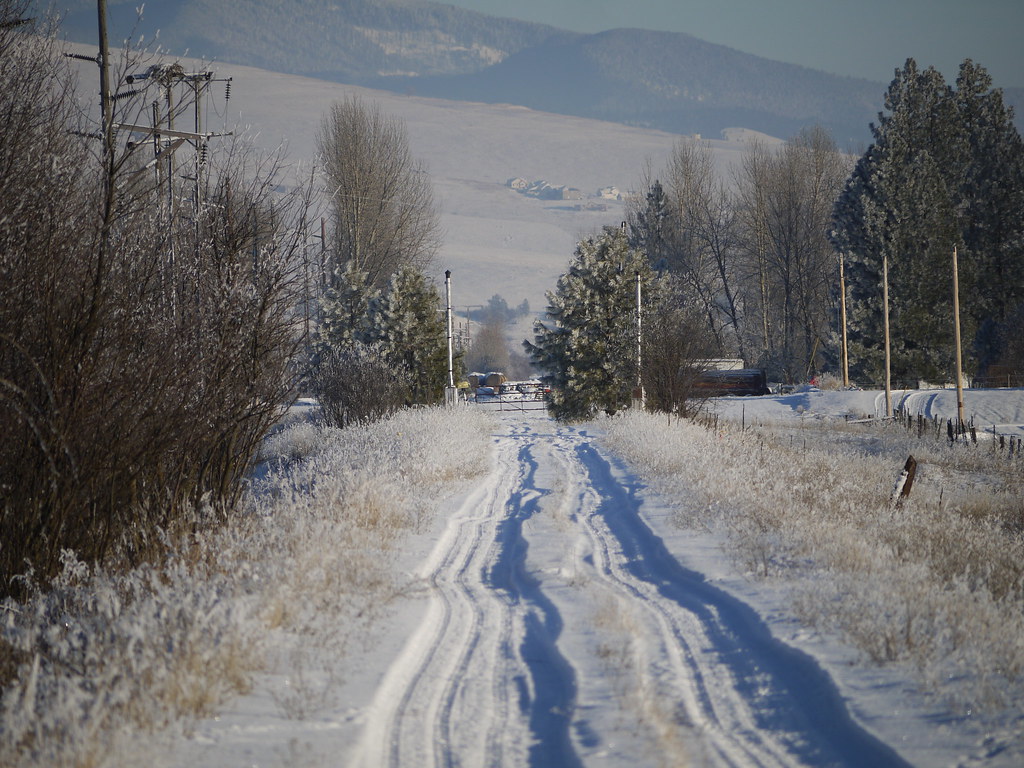 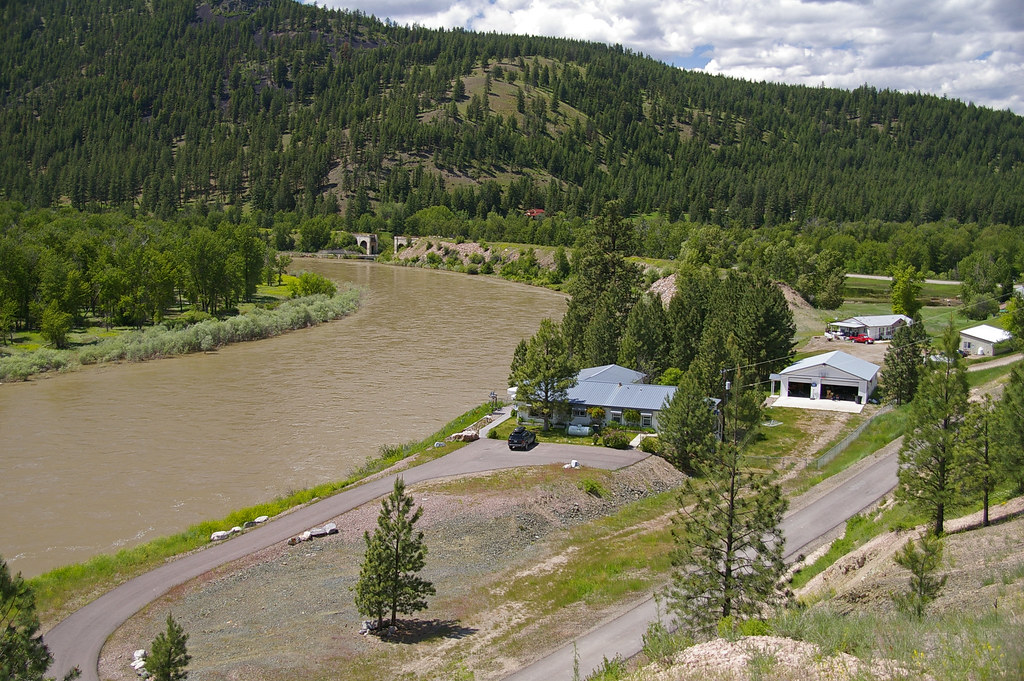 Houses have been built here at Soudan by way of removing the railroad embankment. In the distance can be seen the piers of the former bridge over Frontage Road. Source: Flickr

A good picture of the bridge with a Little Joe and a pair of Alcos on a freight crossing the Frontage Road can be seen on this tweet. 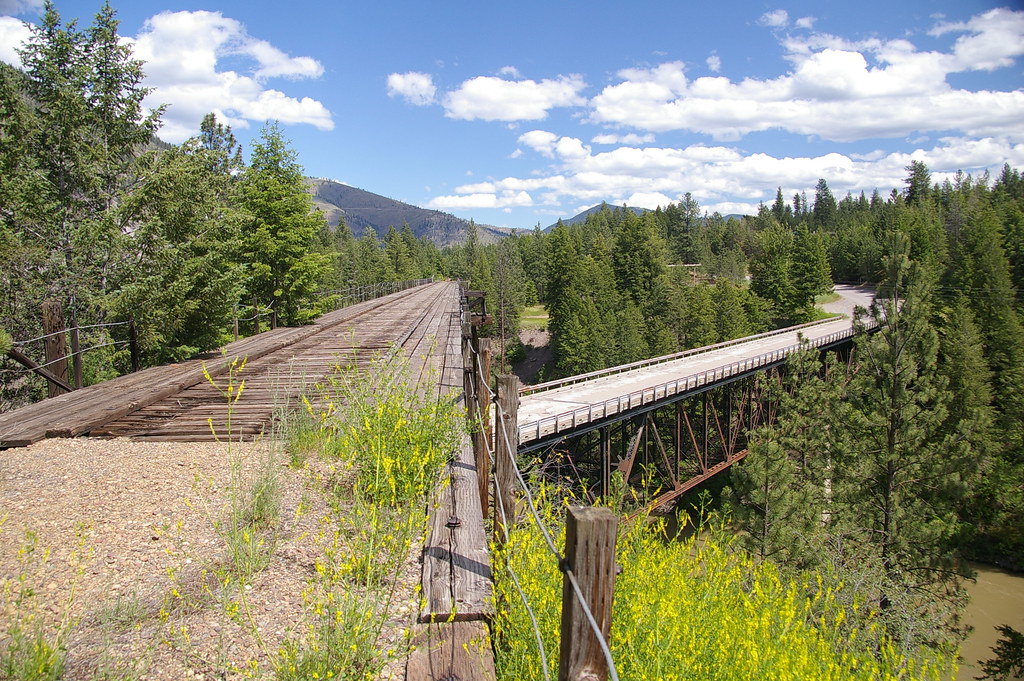 The disused Milwaukee bridge near Alberton. The source page says Cyr but its not clear which it is, as the one further east is also known as Cyr. There was once two rail bridges here. Just the Milwaukee’s remains. Source: Flickr

A view of this bridge sited in Alberton Gorge can be seen from the old highway on Google Streets. 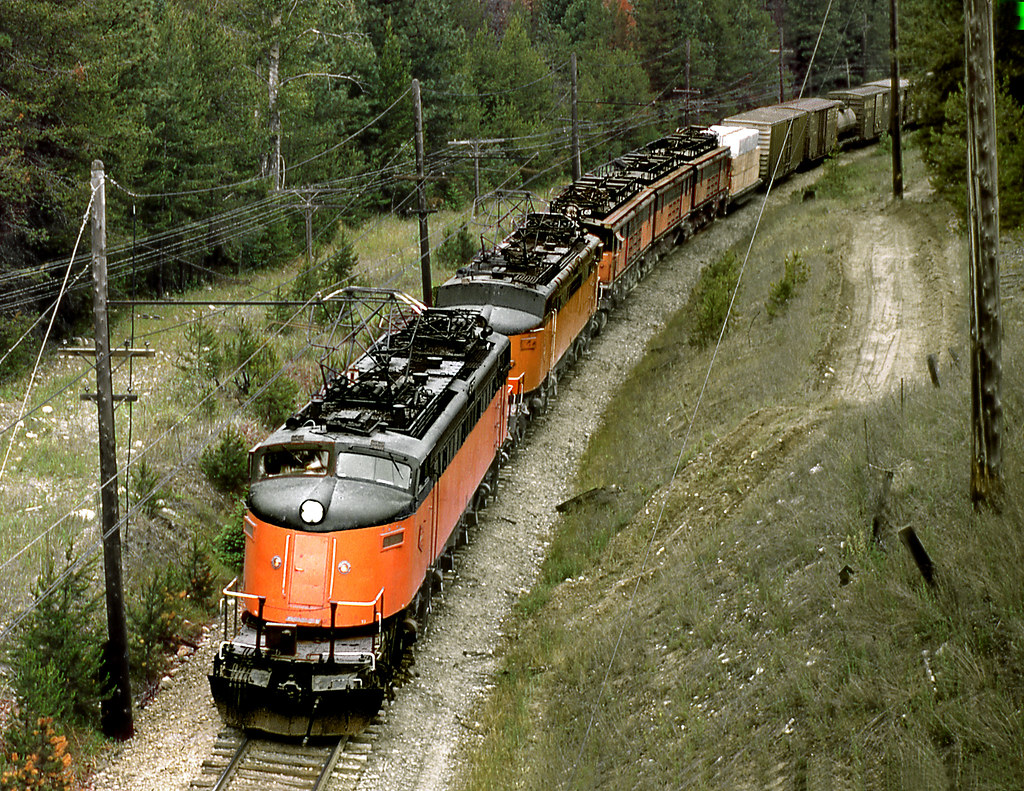 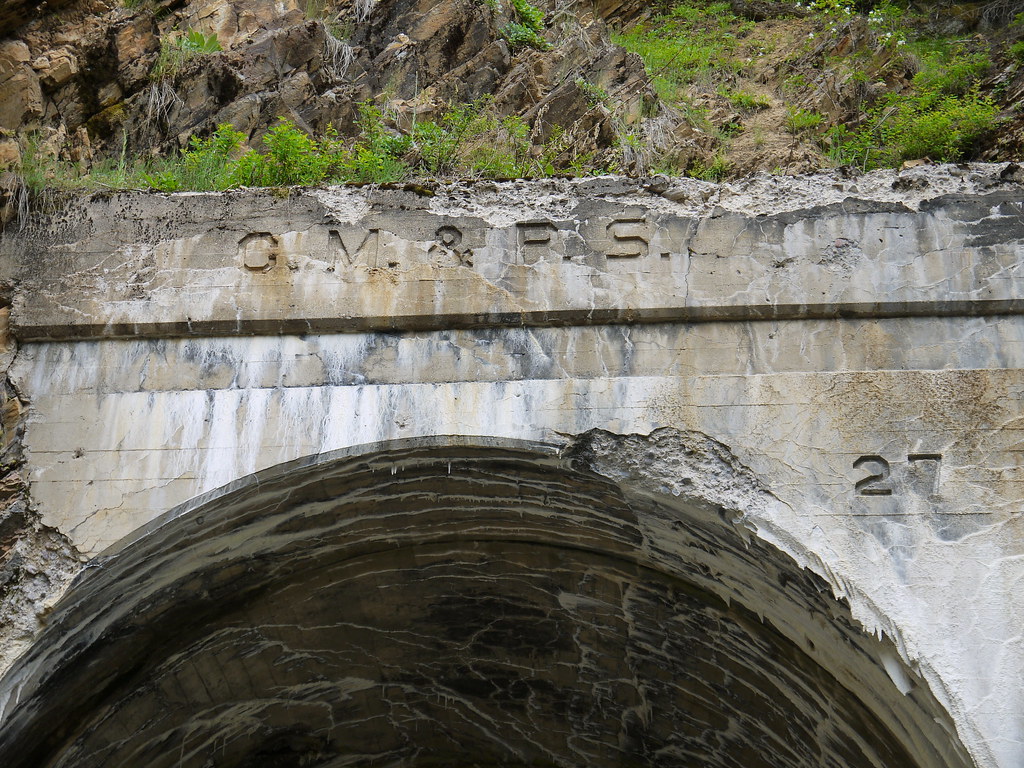 This is Tunnel 27 (Loop no 2 tunnel) at Adair with its PS or ‘Puget Sound’ engraved on the portal. Source: Flickr

A succession of tunnels on the St. Paul’s Pass section had the initials CM&PS engraved on their portals (inc tunnels 22, 25, 27, 28, 29 and 30) which denoted Chicago, Milwaukee and Puget Sound railway. In fact in the early days of the new line boxcars and cabooses had that name painted on their sides. Not long after however the company reverted to using St. Paul in their title thus it became the Chicago Milwaukee St. Paul and Pacific Railway – changed to railroad in 1927. The ‘Saint Paul’ evidently referred to either the other twin city (as had been the case in the past) or the new St. Paul pass route the line took over the Bitterroot mountains. 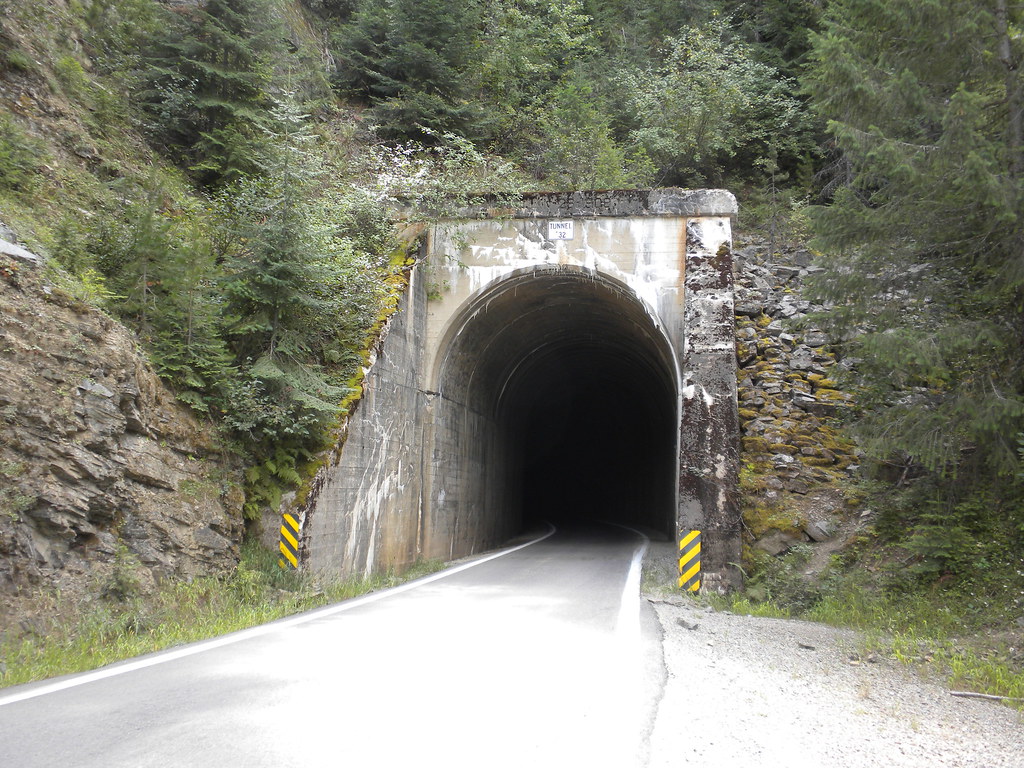 Tunnel no.32 – also known as Glade Creek tunnel No.1. This is between Pearson and Avery. At least three of the tunnels on that section were given over to highway traffic. This was built over the old Milwaukee Road upwards from Avery in order that people could access the scenic countryside around Pearson and Falcon. Source: Flickr 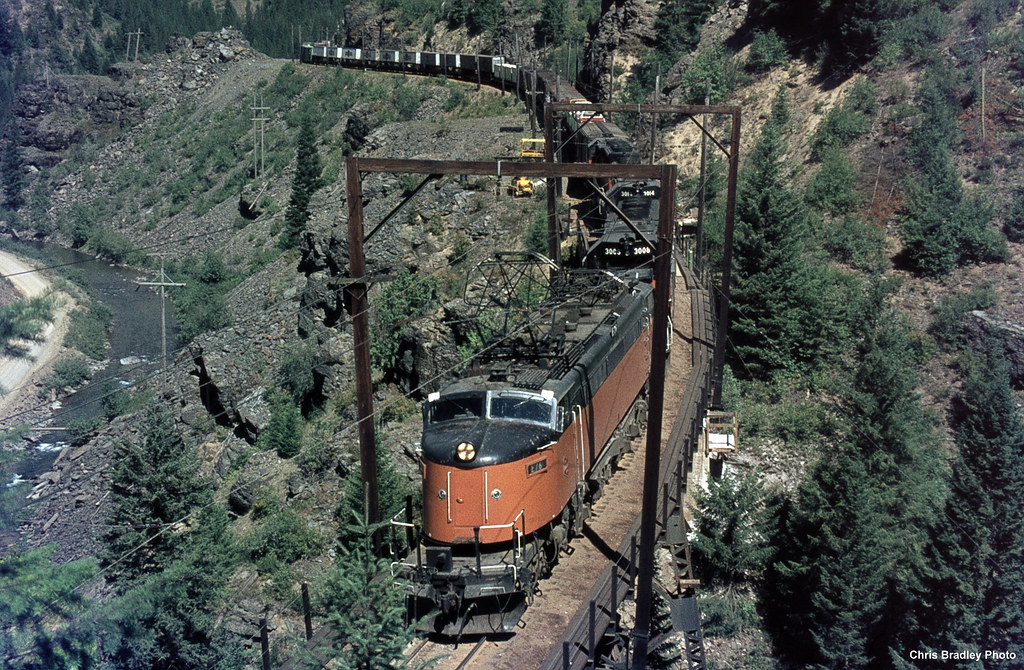 Great shot of a Little Joe crossing one of the trestles north of Avery 1972. Source: Flickr 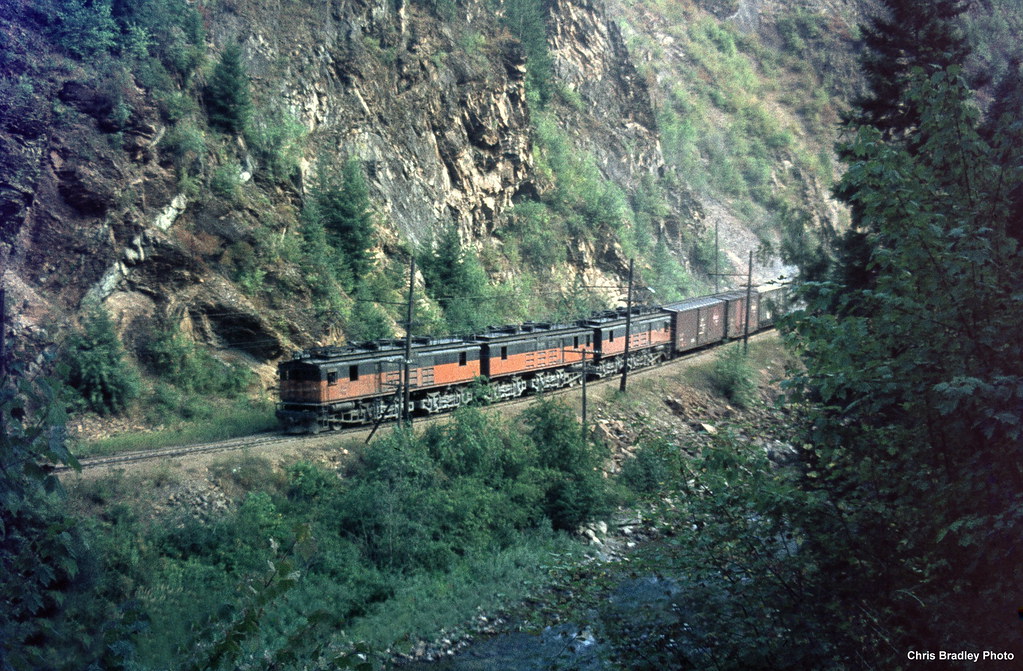 Lovely shot of a Boxcab on the approach to Avery in 1972. Source: Flickr 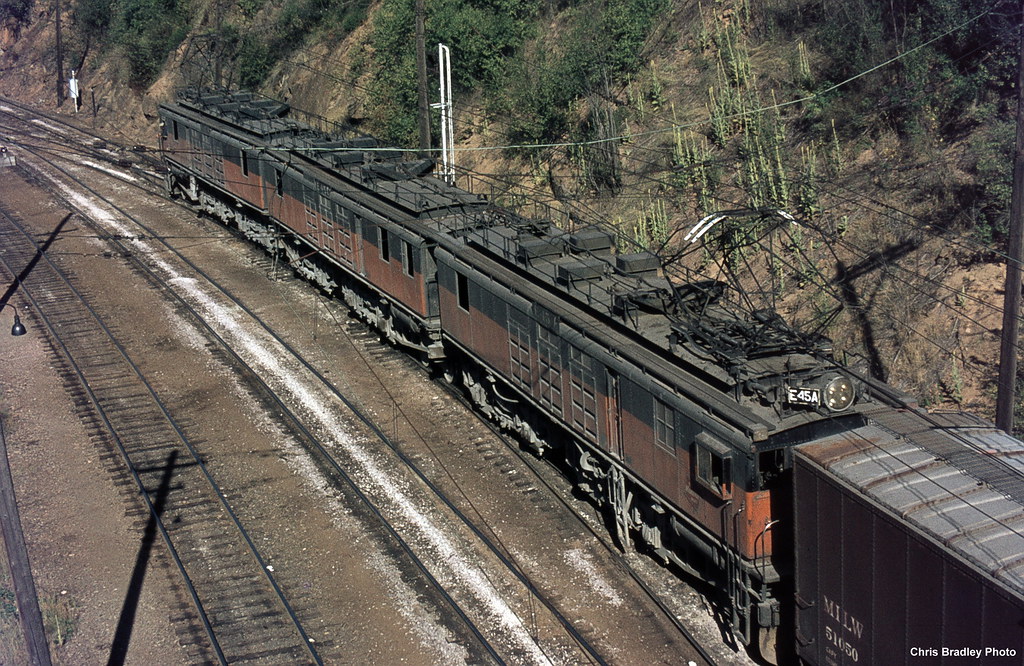 A venerable boxcab viewed from the highway at Avery in 1972. These were introduced for the line’s opening in 1914 and were getting on for sixty years of age when the plug was finally pulled on the Milwaukee’s famous electric services. Source: Flickr

Nice shot of a Little Joe at Avery waiting to act as helper for an eastbound freight over the steep mountain grades. Source: Pinterest

Avery is of course the western end of the Rockies electrification. Here’s a bonus and for that we go to Tacoma – the absolute extremity of any Milwaukee electrification. I discovered the former Milwaukee Road’s route in the city had been demolished – and a brand new railway (double track and with new stations of course) built in its place. But there was a surprise, and it is this we will look at.

This is E 26th Street bridge in Tacoma. It was built in 2018. Source: Google Streets.

This work was done as part of the Tacoma Light Rail project, and explains why there is now double track as well as several new stations. What its impressive about this is the new bridge has a Milwaukee Road sign on both sides plus the dates the Pacific extension was in operation.

Close up of the Milwaukee Road sign and the company’s dates of operation in Washington State. Source: Google Streets. 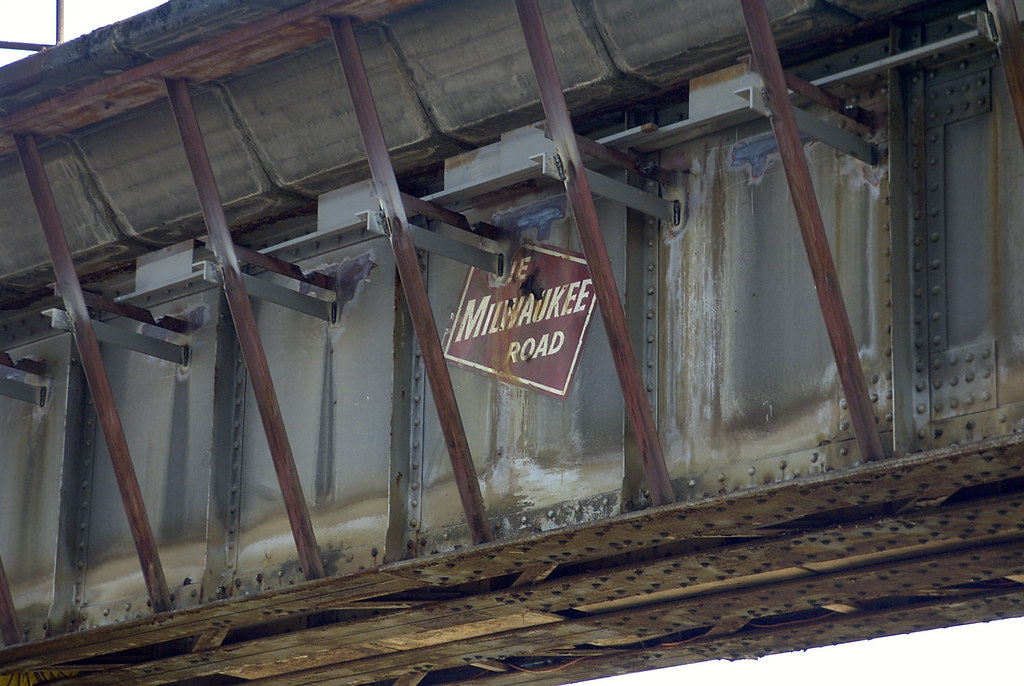 Here’s why they did the new bridge up with a Milwaukee Road sign – because the previous had one too! In fact this was a regular thing to do around here. Some of the other MILW bridges elsewhere had these too but the Coast division made a particular task of it. Source: Flickr

That’s not the end of it! This was once a famous line for one reason. Google Streets (no later then 2015) reveals something interesting…..

The bridge linked to a famous trestle through the city! Here’s the end bit where the Milwaukee’s station began – with the old bridge seen on Google Streets – the trestle was in fact ‘s’ shaped though no-one can explain exactly why but it seems it was to avoid some swampy bits of ground.

The trestle stretching away into the distance towards the port and ultimately Black River Junction where the Milwaukee met its other route from Seattle. Source: Google Streets

The trestle gave the company direct access to its centrally placed freight yard and station at the junction of E 25th and A Streets. This site formerly belonged to the Tacoma Eastern Railroad but was bought by the Milwaukee in 1910.

The Milwaukee’s Tacoma station in 1912. The trestle began at the far end of the station. Source: History Link

Current view taken in 2018 via Google Streets of the approximate location where the Milwaukee’s former station once stood.

The Milwaukee’s ‘S’ shaped trestle through the centre of Tacoma, 1978. Its former station was at the far end of this section. Source: Pinterest

Due to the restricted access along the single track trestle, the company built a new station in the port of Tacoma itself, somewhat remote from the city itself and that became the new electric railway terminus

Night time shot of the Milwaukee’s brand new terminus in Tacoma. There were complaints it was far removed from the main part of the city compared to its previous. A EP2 (Bipolar) locomotive can just be seen at left.

The 1954 station was built adjacent to the company’s Tideflats freight yards thus it was sited right within the port area of the city. The new structure was in use for just seven years when the company’s transcontinental passenger expresses were withdrawn completely. The buildings continued in existence until possibly the late 1980s when it was demolished – the site is now a car park/vehicle holding area for the Port of Tacoma.

The Milwaukee’s electrified lines between Othello and Seattle/Tacoma were retired in 1972, two years before that on the Rockies division ended.

The site of the former Tacoma station in 2014 sixty years after it had opened. Source: Google Streets.

The Chicago Milwaukee St Paul & Pacific Railroad produced a commemorative brochure to mark the end of its electric services. Here’s the link: The Milwaukee Electrification – A Proud Era Passes (in PDF format from Streamliner Memories.)

America, Historical
railway history
Previous
Next
We use cookies on our website to give you the most relevant experience by remembering your preferences and repeat visits. By clicking “Accept All”, you consent to the use of ALL the cookies. However, you may visit "Cookie Settings" to provide a controlled consent.
Cookie SettingsAccept All
Manage consent