The ‘Widened Lines’ (or what is left of them) are rail tunnels between St Pancras and Farringdon now used by Thameslink. The tunnels were a joint venture between the Great Northern and Metropolitan Railways and completed in 1866. Historically the lines also linked to King’s Cross mainline station as well as terminating at Moorgate, and serving depots at Farringdon and the Smithfield markets.
This is a view of the old tunnel ramp at Kings’ Cross in its last days before disappearing completely. Trains from Moorgate emerged into the long gone platform 16 (later renumbered 14) at King’s Cross via what was known as the Hotel Curve. By that time just part of the retaining wall leading to the tunnel existed. These pictures were taken in May 2005.

In the foreground is the top of the tunnel.
Attempts have been made to keep any potential urban explorers from crawling through the remaining gap in the tunnel towards the old King’s Cross Midland (now the disused Thameslink) station.

The pictures below are embedded from Flicker and show the same scenes in the 1970s. Both my 2005 and the 1977 view taken by loosegrip99 clearly show the same brickwork above the arch of the tunnel. 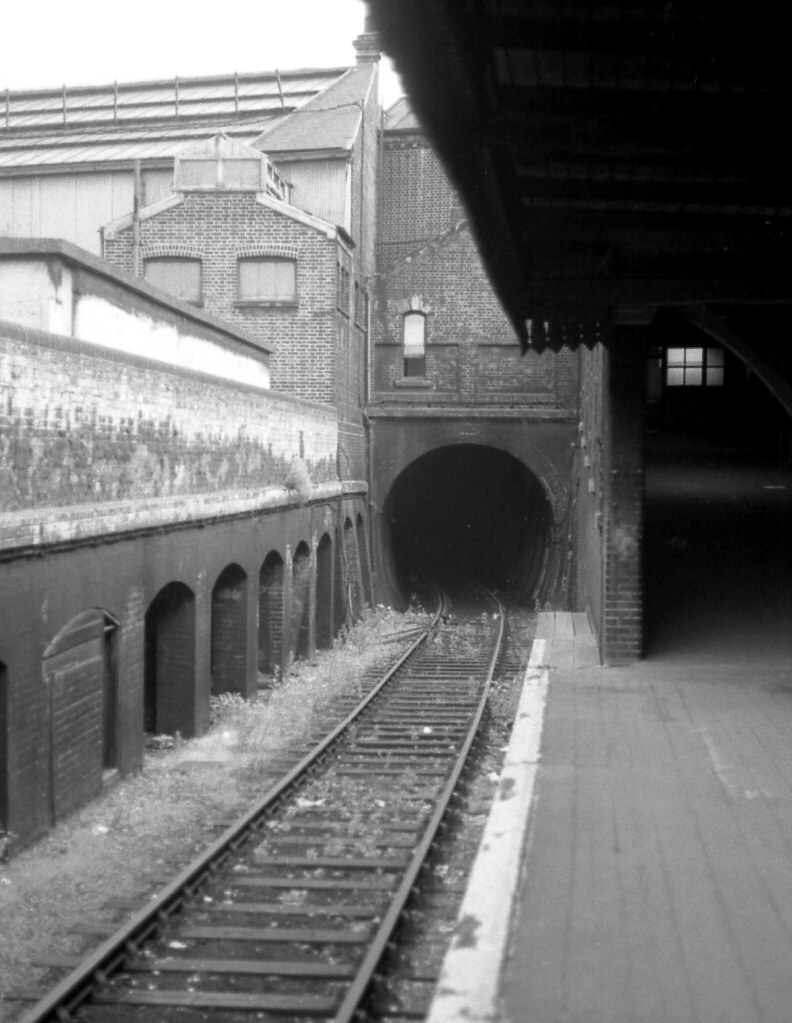 A DMU, possibly bound for Welwyn, is seen at Platform 14 having just emerged from the Hotel Curve tunnel sometime in this 1970s view by std70040. On the right can be seen a pair of workmens’ escape arches. The top of one of these (not the same one though) can be seen in the picture I took in 2005. Look at the one showing the tunnel entrance in 1977 – the top most of the penultimate arch next to the tunnel entrance is that shown in my 2005 view. 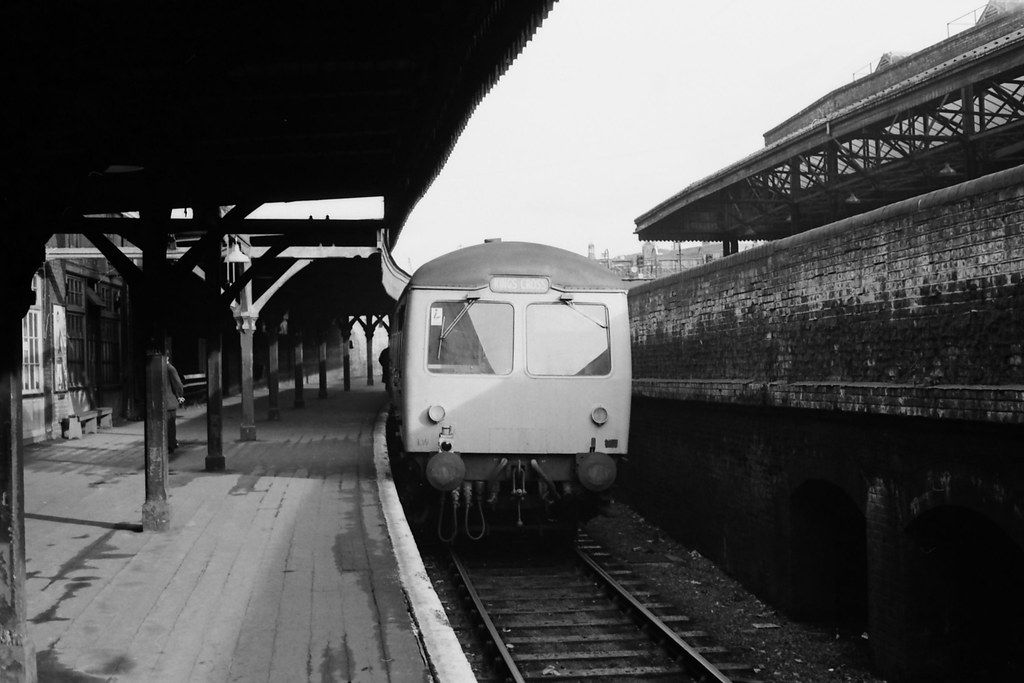 It does seem that services ended in March 1977. records show the original King’s Cross Power Box had a temporary control panel for the York Road and Hotel Curve lines, and these were controlled to March 1977, this being the time that the new King’s Cross track layout had been completed and the eastern Gasworks tunnel was taken out of use.

After 1977 all the remaining Widened Lines services – ie those to Bedford – started from St Pancras and became known as the ‘Bedpan Electrics.’ There would be no more Widened Lines services via King’s Cross, thus the changes made in 1977 made sense because a through connection continued to be made to the widened lines.

It is said the old tunnels were later used for access in order to upgrade the remaining section of widened lines between St Pancras and Farringdon for the introduction of Thameslink in 1988.

The suburban station at York Way. has now disappears although some elements of this and the former tunnel that led down to the widened lines are still visible at the side of the present King’s Cross Platform 0. The tunnel under York Way and the Regent’s Quarter does carry a number service pipes and electricity cables and it is clearly accessible as far as the widened (Thameslink) lines.

The following picture was taken in April 2017 and shows the same location today, this being where the tunnel from the Hotel Curve emerged. Everything has been concreted over. The only indication of any presence of the former Hotel Curve tunnel slope seems to be the two sealed pipes in the foreground. This tunnel is certainly driveable and access is needed to maintain some services as well as any works that may be needed on the Thameslink lines.

The renovated access to the widened lines for maintenance work clearly passes beneath the area shown in the picture above before entering the old tunnel bore itself.

As well as being used to upgrade the remaining lines for Thameslink, I had read in an engineering magazine the old King’s Cross tunnel had been used to enable engineering vehicles to access the widened lines for engineering works, and thought this had been a temporary measure. It’s clear this has been made into a permanent feature.

The new vehicular entrance on Goods Way. The slope down to the station throat and old widened lines is evident.

A new access tunnel has been built  which slopes down into the old  section of railway tunnel. This also gives access to the west side of the King’s Cross station throat and in due course will service the basements of the new Google ‘groundscraper’ Headquarters to be built at this location.

A side view of the new vehicular access at the point  where it gives access to King’s Cross station throat for maintenance work. This picture was taken from a train running into the suburban platforms.

The new vehicular passageway gives access to the basement of Google’s offices, but it also continues southwards in order to give vehicular access to the King’s Cross station throat as well as the widened lines themselves.

View from King’s Boulevard showing the stepped segments of the new vehicular access as it gradually drops down to the old widened lines tunnel. This picture was taken before any work began on Google’s new headquarters.

From Goods Way one can see how the entire vehicular access passageway gradually drops until it meets the old railway tunnel portal illustrated in the early part of this article. Google’s new headquarters will be built on top of this roadway.

Historical, London transport
railway
Previous
Next
We use cookies on our website to give you the most relevant experience by remembering your preferences and repeat visits. By clicking “Accept All”, you consent to the use of ALL the cookies. However, you may visit "Cookie Settings" to provide a controlled consent.
Cookie SettingsAccept All
Manage consent