This week is the 50th anniversary of the closure of the Barnstaple to Ilfracombe Railway. This opened on 20 July 1874 and shut for good from 5th October 1970 – the last train was actually two days earlier on the 3rd October – an eight car DMU forming the 19.55pm from Ilfracombe to Exeter carrying around 500 passengers. In this section the line from Mortehoe station to Barnstaple Junction is looked at. The latter is the one and only station that’s still in use – a stub on the lengthy branch from Exeter.

Gallery of the line from Ilfracombe to Barnstaple

The station sometime in the early sixties. Source: Twitter

The LLCB’s Exmoor Belle of 1970 which traversed the line to Ilfracombe some hours before its final train on 3rd October 1970. The DMU is seen at Mortehoe on the return journey. Source: Wollacombe & Mortehoe Voice

The Exmoor Belle’s route ventured from Exeter to the first railhead at Ilfracombe before venturing to the other railhead at Meeth. It was formed by a 3 car Class 118DMU. Quotes and more pictures at Plymouth Railway Circle.

Mogul 31838 in charge of a goods train near Mortehoe station. September 1959.

The Ilfracombe portion of the Atlantic Coast Express tackling the severe Mortehoe bank during the summer of 1930. The train was topped and tailed by a pair of M7’s (322 at front and 45 at rear) giving assistance to the N Class no.832 in charge of the eleven coach train.

There were a number of level crossings en route to Braunton however I cant find any good pictures of these in use apart from a set featuring Georgeham Gates to the north of Braunton station.

Great view of Braunton during 1916 which I coloured specially for this feature! 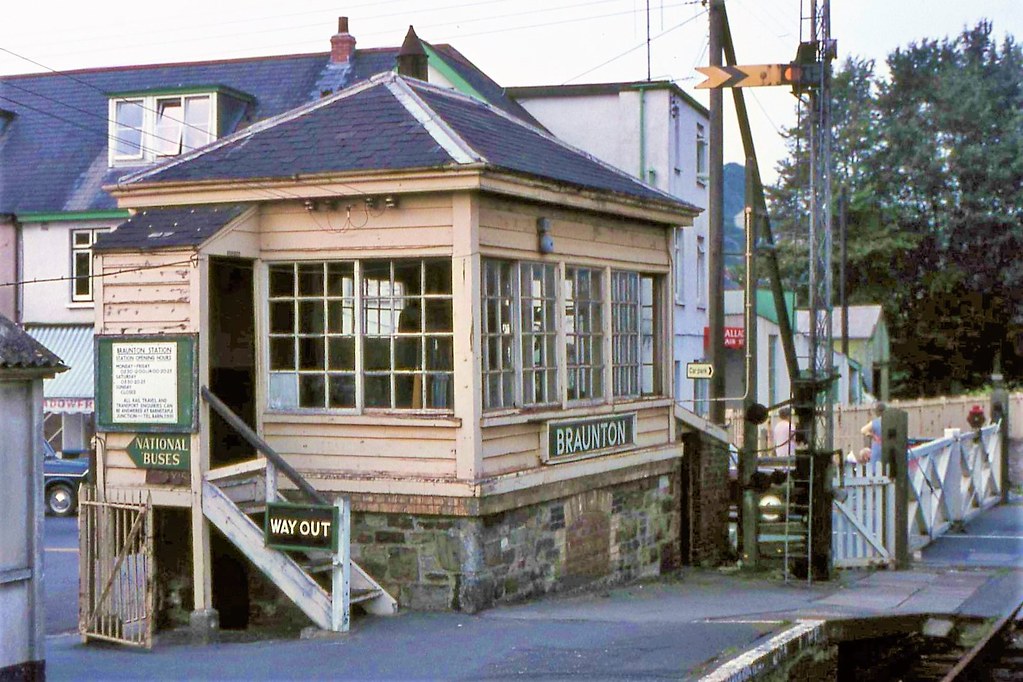 Lovely photo of Braunton station’s signal box in early 1970. Note the station’s opening hours and the sign pointing towards ‘National Buses.’ Clearly they were prepping passengers for eventual use of buses rather than trains! And that was what they called progress! The signal boxes and level crossing boxes from Barnstaple Town to Mortehoe were in this particular style, set quite low down compared to a usual signal box which would be much taller. Source: Flickr

The signal box stood on the down Braunton platform – the tracks in front of the signal box were in fact disused. These had been disconnected from the running line which was on the up platform. A similar situation existed at Wrafton. Interestingly north of Braunton the operational line switched from the up to the down track. Invariably at many of the line’s crossings the redundant track has been left embedded in the roadway and this is how some of the locations that can be seen today still exhibit a double track formation. 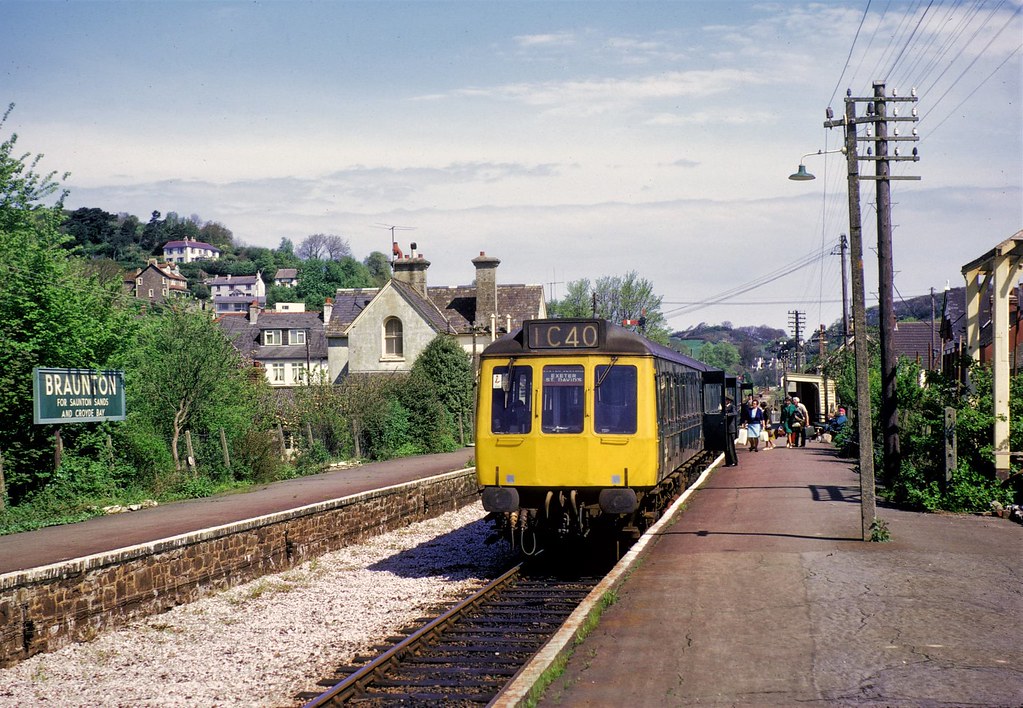 Braunton station in its final form – seen on 11th May 1970. Source: Flickr 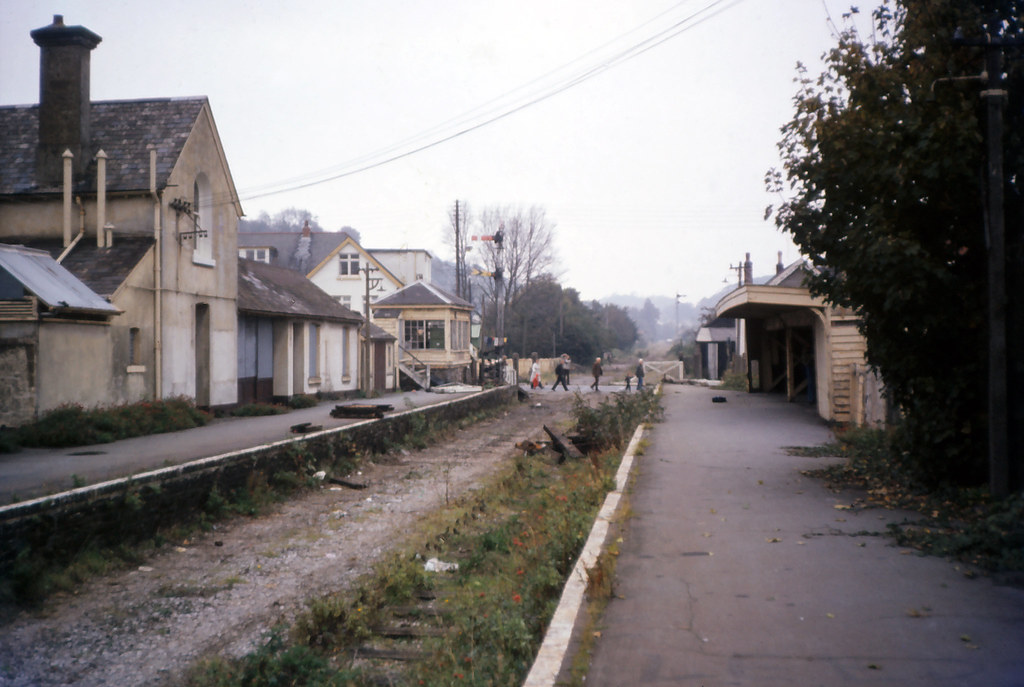 These scenes of the line at Braunton are how I remember it in 1980. Everything was complete even the signals, signal boxes, just the track was missing. There wasn’t anything to stop people walking on the trackbed or the platforms. The derelict station was a most surreal scene being right in the centre of Braunton intself. 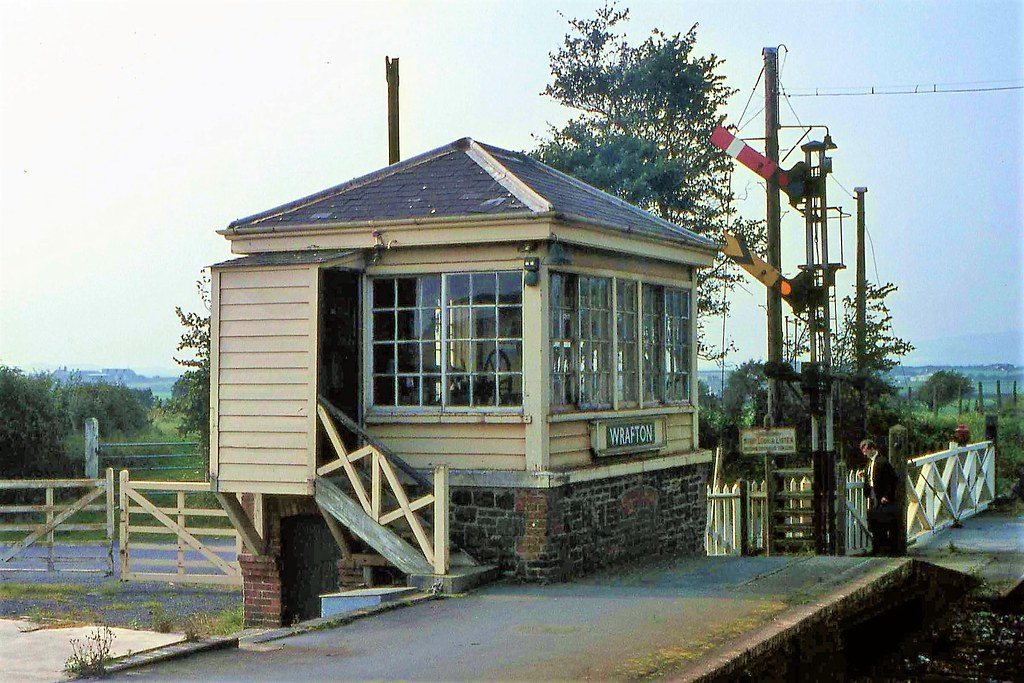 Wrafton’s signal box on the same day as that above at Braunton – 22 January 1970. Source: Flickr

The mouth of the River Yeo was an interesting concept in terms of railways. It was crossed by a swing bridge, but thats not the only aspect. On one side of the river was a standard gauge branch from the Ilfracombe line and on the other was the narrow gauge Lynton & Barnstaple Line, with its depot at Pilton Yard just a little further upstream. Much of the course of the former standard gauge line is now a riverside roadway known as Rolle Quay. The standard gauge branch to Rolle Quay also marked the start of the double track section from Barnstaple to Ilfracombe.

The start of the double track section to Ilfracombe was also characterised by being the junction for the branch to Rolle Quay which led off at left. Source: Facebook

View of the swing bridge at Pottington and the signal box that controlled it. View looks west towards Wrafton. Source: Facebook

A classic station scene! A train on the narrow gauge Lynton line at Barnstaple Town. The standard gauge line to Ilfracombe is at right. Source: Twitter

The above picture was very likely taken in the 1890s before the Ilfracombe line was doubled. The evidence here is the loop that existed prior to the doubling in 1898, although according to OS maps it seems the loop did exist for a few more years after 1898 (that of course depends on when the surveys were actually undertaken and the maps were printed!)

M7 tank with a local goods heading across the Taw in 1949.

The adjacent ‘Long Bridge’ at Barnstaple provided ample photographic opportunities for enthusiasts which is why this section of the line proved to be one of the most popular locations. The curvature of the bridge meant excellent shots could be taken of the trains almost head on, and in terms of a UK railway photographic location it was totally unique. Even being on the train itself some great photographic opportunities could be got whether one was riding at the rear of the train or happened to be leaning out of the carriage window right behind the locomotive itself. The Taw viaduct in fact gave rail enthusiasts something of a cause célèbre – it wasn’t just railway enthusiasts too by the way – some unusual angled photographs were taken by railway officials too because they too saw the potential the Taw viaduct offered. In fact some of the early publicity for the Devon Belle during 1947 too featured the newly named train on the river crossing.

34020 ‘Seaton’ heads across the Taw towards Barnstaple Junction with a mixed train from Ilfracombe. Source: Twitter

30 August 1970 – as the book this picture comes from tells us, this was in fact the final locomotive hauled excursion along the line. D6588 and D6566 head across the Taw towards Barnstaple Town with what is thought to be the Class 33s’ one and only visit to Ilfracombe. The locomotives are depicted arriving at Ilfracombe in a picture further up this page. For a description of that railtour here’s a PDF document.

(Note: The Diesel and Electric Preservation Group deleted the above document – however it was archived on the Internet so its still available. As always if that goes then I provide a backup too.) 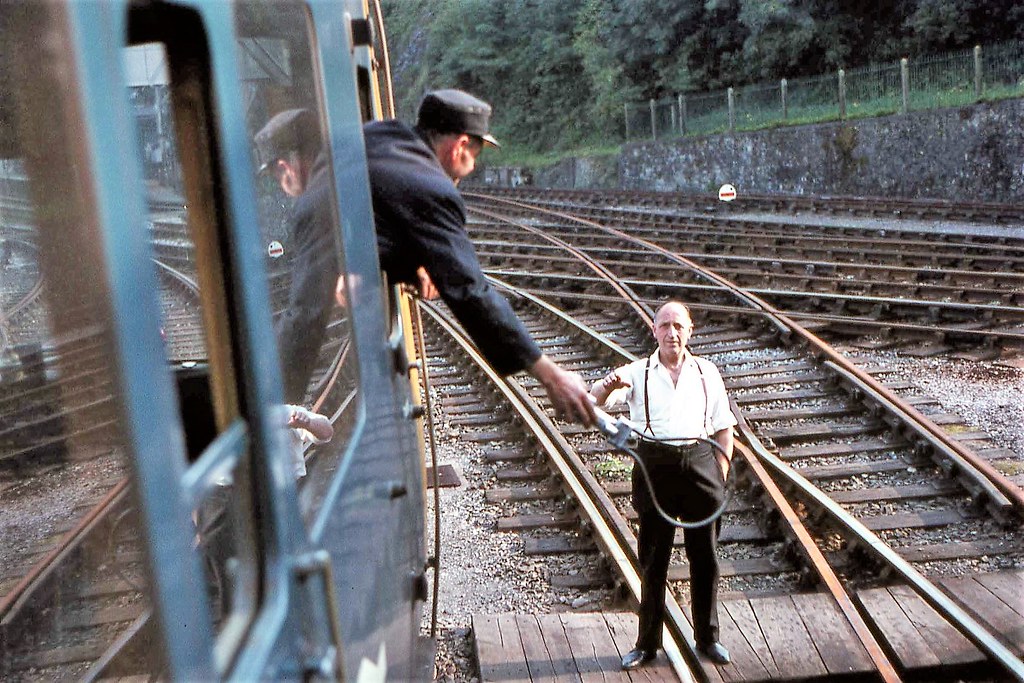 The junction station’s signalman takes the token for the section to Barnstaple Town. January 1970. Source: Flickr

Barnstaple Junction in the 1970s. Note the ongoing rationalisation. Platform three is no longer tracked. Those tracks curving to the left would soon be taken up. Source: Twitter

The only trains to run to Ilfracombe after closure was the BR inspector’s trip in 1975 and an inspection/salvage trip with diesel shunter D4160 in 1973.

The inspector’s train of February 1975 train is reported in the local news. Source: Facebook

The final train – an inspectors’ trip to Ilfracombe to assess the line’s condition on its return at Braunton crossing in February 1975. It was said this trip was made with a view to possible restoration of passenger services. No such luck! BR began demolishing Ilfracombe station in the summer of 1975. The tracks were ripped up in October 1975. The North Devon Railway Preservation Society tried to stop the track being ripped up and BR told the society if it paid £20,000 by 9am the next day the demolition work would stop. The society was unable to comply with such a request at extremely short notice. Source: Cyberheritage

The Taw viaduct was demolished in the summer of 1977. It was meant to have been demolished in the winter of 1976/77 however the river was in flood, thus the contractors, Industrial Dismantling Steel & Plant Limited of Exeter, had to wait for better weather before they could begin their work.

Some of the images were sourced from books/mags in my collection including:

The Withered Arm by T. Roche (1967)
Railways of Devon by A. Kingdom 1974
Branch lines round Britain in the diesel era by J. A. Vaughan 1975
More Southern Steam in the West Country by T. Fairclough & A. WIllis 1975
Southern Steam Doubleheaded by T. Fairclough & A. Willis 1975
The Barnstaple & Ilfracombe Railway by C. Maggs (1978)
A Century and Half of the Southern Railway, D. St. John Thomas 1988
Southern Express Locomotives by B. Stephenson 1988
Backtrack sometime in the 1990s (date unknown as as I cut out the pictures on the Southern’s west country branches!)

Some images were curated from the Rails to Ilfracombe Gallery on Flickr.

The feature image is of Battle of Britain Class 34011 Tavistock on the Taw viaduct – set against a modern 21st Century view of Barnstaple! Its a composite image I created specially for this Barnstaple and Ilfracombe Railway feature.

Historical
railway history
Previous
Next
We use cookies on our website to give you the most relevant experience by remembering your preferences and repeat visits. By clicking “Accept All”, you consent to the use of ALL the cookies. However, you may visit "Cookie Settings" to provide a controlled consent.
Cookie SettingsAccept All
Manage consent