The Romford to Upminster Line

On 4th October 2020 the final Class 315 to be seen in London Overground colours on the Great Eastern main line (besides Liverpool Street to Bethnal Green) worked the branch between Romford and Upminster. The line had been a popular haunt for enthusiasts as it was one location where spotting a Class 315 could be guaranteed, and on the visits I made to the line recently there was always an enthusiast or two about! In its five short years of operation as part of the London Overground network the line has seen a good variety of EMUs some of which can be seen here. The 315s were no doubt the most enduring of the lot working the branch for two years plus out of those five years!

The final journey. This was taken just two minutes before 315802 departed from Upminster for the last time. As one can see it was raining heavily.

The Class 315s were allocated to the line after use of more modern stock such as the 317s and 321s as a stop gap measure whilst the 710s, pencilled to be introduced from autumn 2017 or early 2018, were delayed. It turned out to be a two year long stop gap – much to the annoyance of long suffering passengers especially those on the Goblin who had waited for new stock on their line to arrive after years of mishaps, botched upgrades and a regular diet of bus replacement services.

The 710s were originally delayed by testing procedures and a major issue with interoperability between pairs which meant they couldn’t run as eight car units. It wasn’t until April 2019 the ORR approved the 710s for service – along with restrictions and these finally had their first outing on the Goblin line. London Overground then expected all of its 710s in service by June 2020 including Romford to Upminster – of course things were too delayed by the coronavirus crisis and the 315s have seen considerably extended use on all lines out of Liverpool Street (both Crossrail and LO.) Whilst there are no longer 315s on the branch, these veteran trains will continue to work the Great Eastern main line a little longer.

But first a recap of the line’s history and the stock that previously worked the line. As always it was steam trains that started the whole thing going. The branch particularly had a unique push-pull service which meant it was quite easy to keep a half hourly service as there was no need to run the engine round its train even though a loop was there at Romford for the purpose. The problem was the Upminster end of the line where track rationalisation in the 1930s meant a push pull was necessary.

And yes I remember that wooden platform at Romford very well! I am certain this and the Southminster branch were worked by BR lightweight Derby DMUs in their early days although other types of DMU units were the regular diet. In fact after writing this and did some research which shows Stratford Derby Lightweights worked both branches and that confirmation comes from Railcar.co.uk

I cant find a picture of a Derby Lightweight on the Upminster however the Stratford based unit shown here would have worked that too. This low res picture is how I remember Wickford station. Taken circa 1957 it shows a Derby Lightweight (the front is E79252) on a Southminster service. Source: Railcar

The large station nameboard in the scene above reads as ‘Wickford Junction change for Burnham-on-Crouch and Southminster Line.’ Originally it read ‘Wickford Junction change here for Burnham Southminster and Maldon,’ however after the latter closed in 1939 it was changed to that above. Wickford as a ‘junction’ for Maldon was something of a misnomer as the junction was at Woodham Ferris (Woodham Ferrers from 1913 and South Woodham Ferrers from 2007.) As I recall the sign was later changed to an ER enamel blue one which said ‘Wickford change for Southminster Line.’ That sign can just be seen in this Flickr photograph from 1973. The question of Wickford’s station nameboard and its role as a junction is an interesting subject – but besides the Derby Lightweights its rather off the point in regards to the ‘Romford Push & Pull!’ 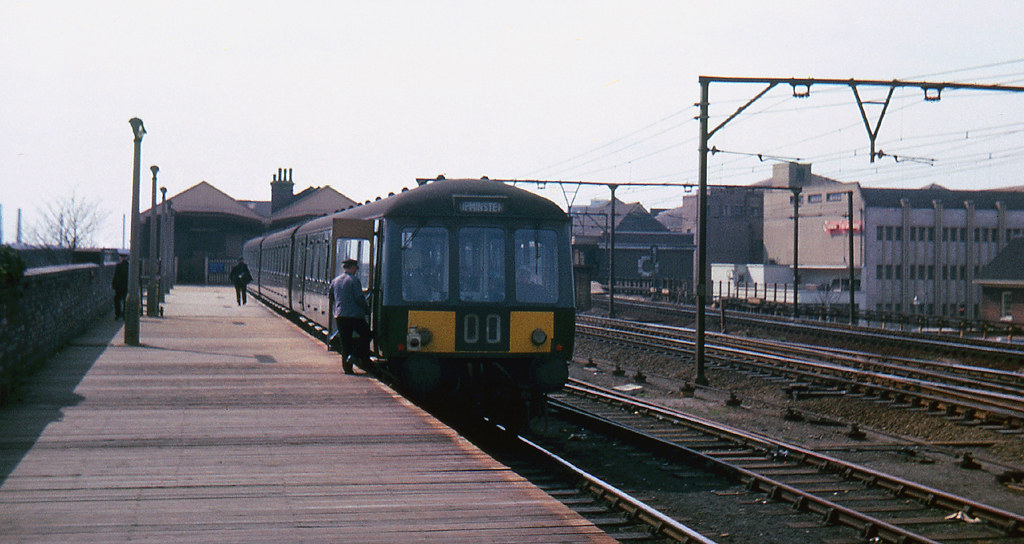 The Upminster branch platform as I remember it – wooden platform and a run-round loop. The loop was operated by a ground frame sited just behind the DMU. Source: Flickr

As well as the ‘Romford push-pull’ the line has too been called ‘that weird Romford – Upminster…. thing.’ (Twitter.) Somewhat weirdly is the little known fact the line once sported a pair of goods yards! The three mile long branch was opened by the London Tilbury and Southend Railway and a separate goods yards was built at Romford to compete with the Great Eastern’s own offering on the other side of the main station. The yard was just beyond the junction with the Great Eastern at Romford and in latter days was used as a coal depot. A picture of the coal depot’s sign can be seen here. The site’s now occupied by modern houses.

View of the Victoria Road sidings. The tracks fanned out at either end into a pair of goods yards. That nearest the Great Eastern junction was known as Victoria Road Depot. Source: RCTS

The branch was of course steam operated for a good part of its first century which is why a loop was installed at Romford. At Upminster the train shuttled around its stock in the yards nearby. The service later became a push-pull but as I mentioned earlier, its doubtful that one terminus loop was ever useful in the latter days of steam. In fact as I remember that track always used to be rusty. The line had semaphore signals however they were permanently in the off position as I remember. These were operated by a ground frame sited near the junction with Victoria Road goods yard. The loop itself had gone by the seventies. The image below shows the coal bunker (on far left) was still present thirty years after the last steam operated services on the branch! 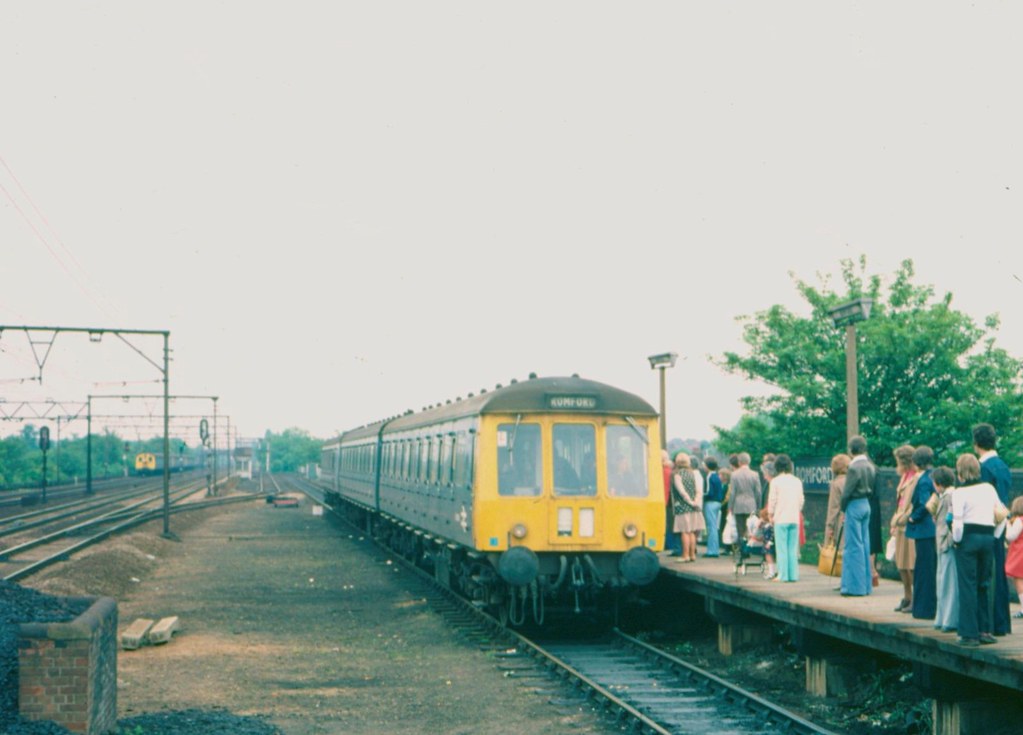 In this picture from 1976 it can be seen how the remaining part of the loop has been altered to form a plain track to the up main. In the distance can be seen the signal gantry for the branch, which always had the platform semaphore in the up or off position. Source: Flickr

The Upminster train at Romford in April 1976. Note how the wooden platform’s been narrowed to save on rebuilding costs! Source: Pinterest 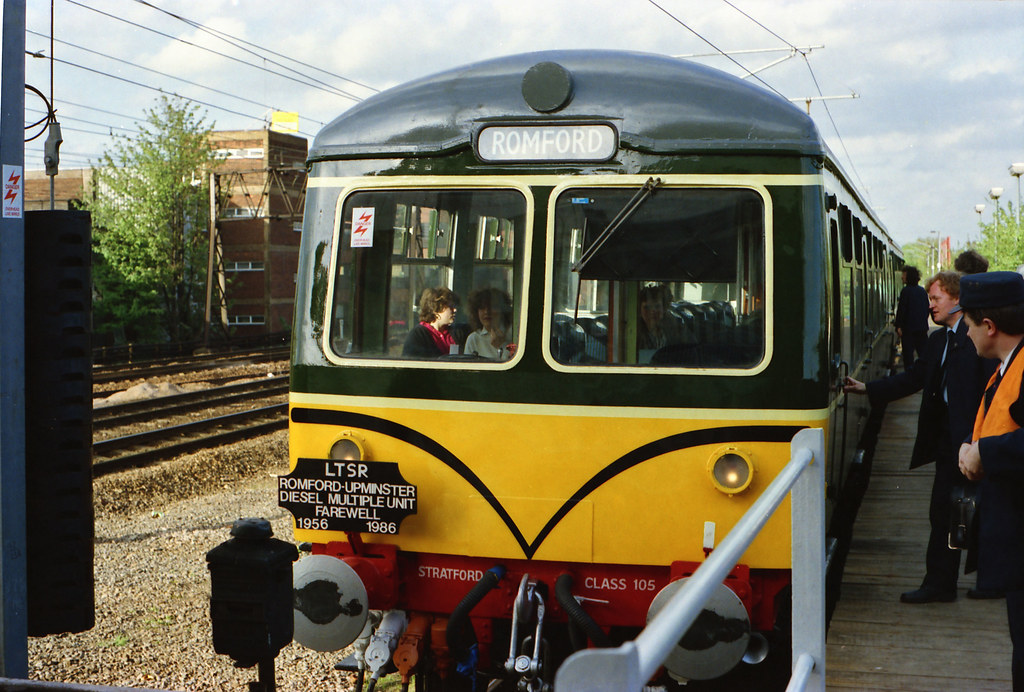 The smartly turned out DMU at Romford on the final day of DMU operation. 10 May 1986. Electric services began the next day. Source: Flickr 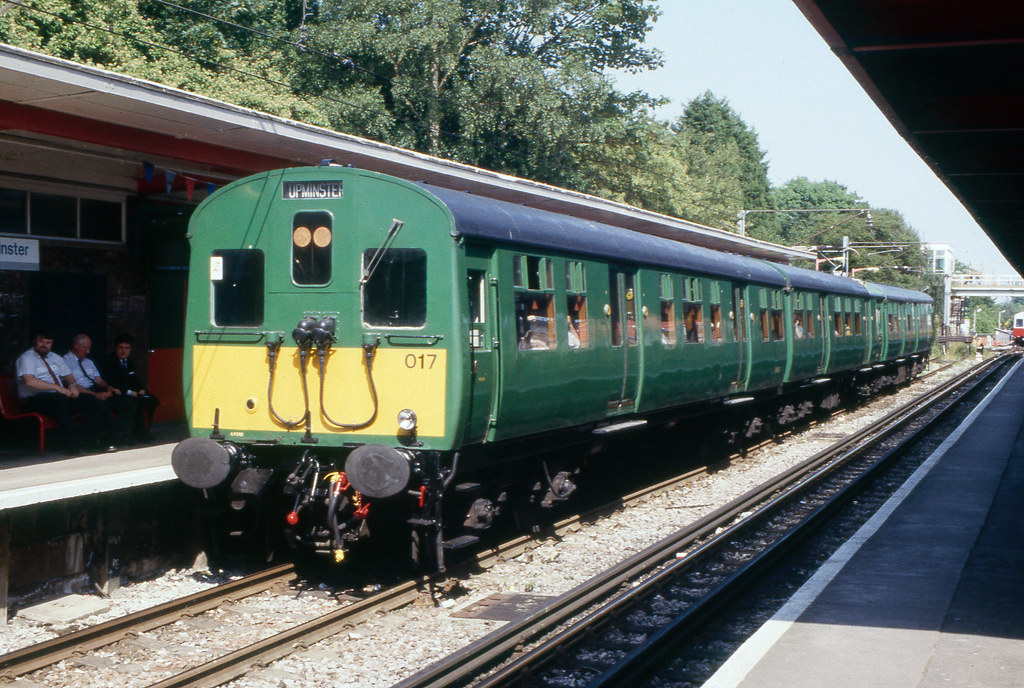 The venerable Class 306s which I first knew when they had not even achieved their first decade of service! They were always the classy EMU for me – even a couple of trips to Southend Victoria in the sixties produced a 306 – quite unusual as the Essex coast was rather way off their usual haunt. 306017 is seen at Upminster during the line’s 125th anniversary. Source: Flickr

Oddity on the Upminster trip! Class 321 415 in Sliverlink colours! The company was taken over by London Overground though Upminster wasn’t a Silverlink operation. Source: Leighton Logs

It wasn’t until 2015 that London Overground took over the Romford-Upminster operation thus this is a recent move and this creates a rather niche operation in LO’s operations because its not connected to the rest of its network as the other lines are – although the main body, TfL is in fact the overall owner of both Crossrail (Elizabeth Line) and London Overground at Romford and London Underground at Upminster. However LO has no direct bearing on the other two (TfL Rail/Underground) for its much like TfL’s other operations – they are all in fact separate legal entities.

London Overground indeed soon began the Upminster operation with its own Class 321s when it took over the service in 2015, however it didn’t have quite enough of those thus a shortage meant it had to procure a unit from London Midland for a while…. it means a West Coast route train following the Silverlink was once again seen on the line!

However it wasn’t the 321s that began LO work on the line. It was 317s rather. The following video shows that class on Upminster duties just three days after LO took over. Some of these had been retired from Stanstead Express duties and had extremely comfortable seating!

The whole aim of this post is really to commemorate the fact the Class 315s have now retired and the service has been taken over by Class 710s. En route to Upminster for the final Class 315 on 4th October I spotted a considerably graffiti covered Class 710 at Upton Park depot! It certainly wasn’t that one which was put into service the next day, rather it was a nice clean one from Ilford – no blemishes as far as one could see! I haven’t been to the branch since the 710 services began however here’s a picture of one at Upminster on the first day of operations….

The Class 710 at Upminster on its first day of operations. 5th October 2020. Source: Twitter

Here’s a few pictures I took on visits to the line in September 2020 and including some more on the final 315 services 4th October 2020.

On a previous visit it too was raining! Here’s 315801 arriving from Upminster.

The train’s driver is asked to take the obligatory enthusiast pose by Romford station’s orange roundel as 315801 waits to makes yet another journey to the end of the line.

The branch has two public foot crossings, both featured in a video by Geoff Marshall sometime back. I spotted this guy waiting with his bike as the train passed that between Cranham and Osborne Roads!

Interestingly the other crossing between Burnway and Maybush Roads can be seen from Emerson Park station. On both sides of the station the line consists of a rather nice tree lined approach (heavens forbid Network Rail decides to do any mass logging of these trees!) This approach from the south is the one where that crossing can be seen in the distance.

351801 seen coming round the bend near the foot crossing towards Emerson Park.

Upminster station is the only one on the line that does not have London Overground roundels! Both Romford and Emerson Park have large station roundels on the platforms however Upminster simply has these nameboards with a small roundel at the side.

On the final run, this was the 315’s solitary last passenger alighting at Emerson Park!

315802 leaves Romford station as an empty stock working to Ilford for the last time on 4 October. Enthusiasts at the end of the platform record its departure.

Some of us were at the other end of the platform recording the train’s final departure too!

Historical, London transport
Previous
Next
We use cookies on our website to give you the most relevant experience by remembering your preferences and repeat visits. By clicking “Accept All”, you consent to the use of ALL the cookies. However, you may visit "Cookie Settings" to provide a controlled consent.
Cookie SettingsAccept All
Manage consent