The Southwold Railway – England’s premier three foot narrow gauge passenger railway! This week its ninety years since the last passenger trains ran. 2019 is also the 140th anniversary of the line’s opening. This somewhat quirky railway was in service for just fifty years, and remained moribund for several decades more. It has left a considerable mark on the history of this corner of Suffolk. The railway is still affectionately discussed and there is an ongoing project to restore some of the railway with progress being made at both ends of the line.

The Southwold Railway – an introduction:

What was quirky about the railway? Well it wasn’t allowed to go very fast (hence its rather early demise – not forgetting the usual bugbear, road competition) – the line’s maximum speed being 16 miles per hour. The reason for this slow speed is the line was authorised before the Light Railways Act of 1896, which allowed a top speed of 25mph.

Another quirk is the carriages had entrances and window curtains on one side only. That’s because all the platforms were on the south side of the line. No need for any on the other side of the carriages!

Perhaps the quirkiest aspect of the railway is the fact it was officially abandoned in the 1990s – more than sixty years after it had closed!

All the passenger carriages had doors on the southern side only and it followed that there were curtains, also on that side too. The reason for this were the platforms which were all on that side, there was no need for decency curtains on the other!

The Southwold had one other distinction that set it aside from Britain’s other railways. Like a number of other minor railways, it wasn’t incorporated into the pre-grouping. It was left to struggle on its own and the LNER itself refused to offer financial help even though it was also somewhat dependant on the through traffic to Southwold.

In those heady days of the early 20th Century there were two main ways of getting from London to Southwold. One was by paddle steamer from Tower Bridge. It took a good few hours but it was possible to do a round trip in the summer and spend a couple of hours in Southwold.

Failing that there was the train from Liverpool Street. There was no problem reaching Halesworth. In those days it was a main line station and there were regular expresses to either Lowestoft or Great Yarmouth.

From Halesworth it was a case of taking the Southwold Railway itself. This was a journey that took approximately 35 minutes to the seaside resort. A somewhat quaint trip for its carriages offered no luxuries of any sort. Seating was longitude and it was all wooden, no cushions of any sort. The interiors were lit by paraffin lamps. Very austere.

By the end of the 1920’s quaint was fast becoming something people no longer wanted. Motor buses and coaches were all the rage. Those with a penchant for the Southwold Railway’s hardened and rather unforgiving travelling atmosphere were becoming fewer as there were now far more comfortable ways of travelling.

What people thought of the 3ft gauge line! One of the engines depicted as a humorous ‘Old Timer.’ Southwold 1932. Source: Twitter

As a small kid I had not known about the Southwold Railway, clearly we were used to the more modern modes of transport in and about London, preferably electric trains or London’s red trolleybuses or those driven by the internal combustion engine – anything else must have seemed quaint and perhaps not worth mentioning. However I remember the Kelvedon and Tollesbury light railway if that’s anything to go by! In those days the low level station at Kelvedon still remained and and goods trains could be seen shunting in readiness for a run along the light railway. The line’s impressively curved cutting could be seen from a train passing on the nearby main line. Of course today there’s nothing to see, its all housing upon Feering Hill. The cutting was filled in about 1970.

No mention was made to me of the Southwold Railway until about 1965 when one of my relatives gave a photograph of it and informed me they had used the railway in their younger days. Inspired by the photograph I had been given, I set to find out more about the Southwold Railway and this entailed acquiring a copy of the book by Alan Taylor and Eric Tonks.

I was perhaps eleven years old when I saved and spent several weeks pocket money in order to purchase this book. This was the first ever railway book I bought and still have it. Taylor’s and Tonks’ book was originally privately published in 1950. The 1965 edition was much expanded and also very unusually published by Ian Allan Ltd. I say unusually because Ian Allan Ltd were very strict about their house style (name, logo, design) being present on each and every one of their books and magazines yet this one book was allowed to remain quite incognito and bore little sign of corporate interference.

My copy of Alan Taylor and Eric Tonks’ book, published by Ian Allan 1965. I used the font to create the title on this page’s specially created feature picture! A second edition was issued in 1979 with a picture on the cover. The publisher this time was Littlehampton Book Services.

I have explored the Southwold Railway route and have pictures of Halesworth station when it still had its change for Southwold nameboards (as well as the famous level crossing platforms that had by now become fixed.) There was also the footbridge on Southwold Common which was built from the rails of the narrow gauge line, and a fair bit of the harbour branch still remained in situ, as well as the original bowstring bridge across the River Blyth.

Map showing the route of the Southwold Railway. Source: Flickr

There was the road bridge across the former line at Blythburgh, which was extant for many years and could not be mistaken as we travelled over it either by coach or car when venturing up the A12 into East Anglia. The bridge itself helped to mark the railway’s former alignment as it wound through the area. After the bridge’s demolition, the hump partially remained as an embankment.

Mr Jenkins, one time councillor, former Mayor of Southwold and one of the original curators of the Southwold museum is perhaps the only other character I have met who rode the former railway. He showed me around the museum decades ago, this is somewhere around 1972/73, and Mr Jenkins is the one who wrote the book Memories of the Southwold Railway (pub 1964 and updated since) which was sold by the Southwold Museum. My copy of this book is dated to 1968.

Arnold Jenkins’ Memories of the Southwold Railway (1968.) I personalised my copy of the book with a scribble!

Mr. Jenkins too is the guy who photographed and filmed the railway during its last days of existence. There’s a picture later in this article of Mr Jenkins with his cine camera at Southwold station in the railway’s final days.

Now we must get onto the serious subject of the railway itself – including some details about it and photographs of the line in existence, its subsequent closure and what happened after it had shut for good…

The Southwold Railway – its route, photographs and a brief history:

The Southwold Railway opened on 24th September 1879. The day was punctuated by extremely heavy rain and flash floods – and they nearly had to abandon the train services! However the first train managed to make the full round trip, whilst the remaining services ran Southwold to Wenhaston only.

The establishing shot! Southwold railway station in June 1920. The site was at the bottom of the High Street. Source: Twitter 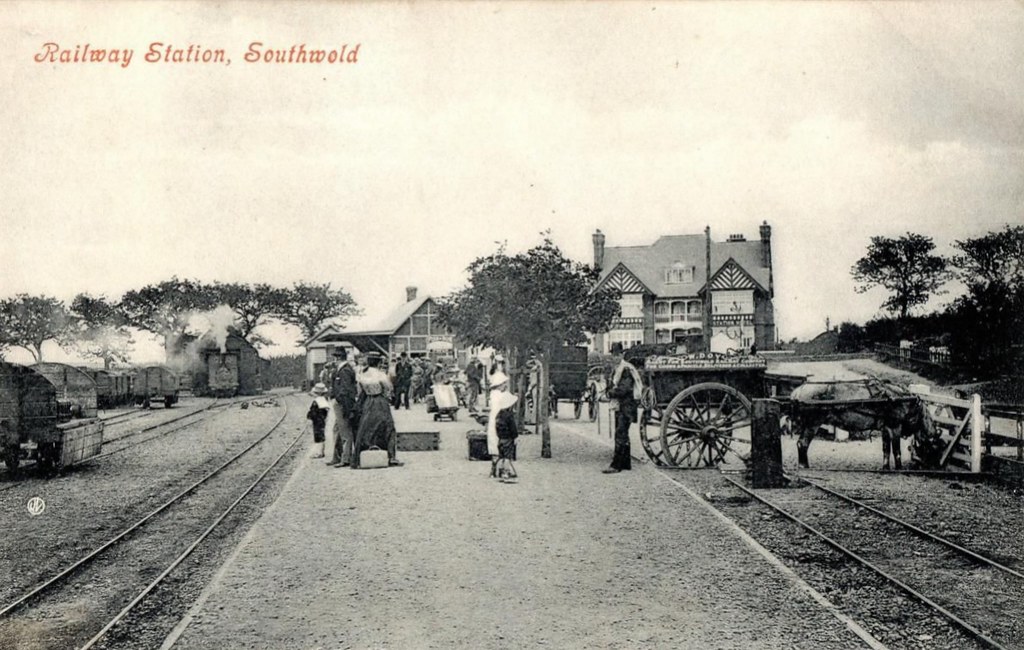 And this is Southwold station in the flesh – during Edwardian days. Source: Flickr

Southwold station in the later years. The luggage van is no.14, now preserved at Carlton Colville. Source: Twitter

Nice view of Southwold station with No 3 Blyth waiting to take its train to Halesworth.

Blyth at Southwold. The house behind is still there. See Google Streets

No.2 Halesworth shunting wagons at Southwold. Source: Was on Facebook – the source file seems to have been deleted so have used an archived version.

No.1 Southwold outside the shed. This is the 1893 model. The original was sold to the Santa Marta railway, Colombia. Source: Twitter (Note: Tweet has been deleted thus an archived image is used.)

Part two – the line from Southwold to Halesworth.

Historical, Narrow Gauge, Quirky
Previous
Next
We use cookies on our website to give you the most relevant experience by remembering your preferences and repeat visits. By clicking “Accept All”, you consent to the use of ALL the cookies. However, you may visit "Cookie Settings" to provide a controlled consent.
Cookie SettingsAccept All
Manage consent