This looks at further examples of British railway’s 4xD policy. That is Demote, Deconstruct, Dereliction and Destruction. I made that up but what it means is first a station was usually demoted. Services downgraded to the most basic. Then the track layout would be deconstructed, usually to a single platform at the far end of a many miles long siding. Following that an air of dereliction would be enthusiastically propagated. The result would of course be further falls in passenger numbers. Then bingo – the railway’s no longer viable. That means destruction was the final, glorious, achievement.

This is what we looked at in the first part of this feature. This second part continues our look at that sort of contrived ‘modernisation’ shit, except in these cases it was rather an abandonment of the railway’s original terminus, a minimal replacement being offered some distance back down the track – and the intervening space given over to car parking.

However the same four D’s are in fact applicable – because the same progression was utilised. First a terminus was relegated, its services being reduced to the bare minimum, then the track rationalised because it no longer justified the services running upon it. Then it was allowed to take on an air of dereliction. In that immediate period between dereliction and destruction, a new (often bus stop type) terminus was built as an ‘alternative’ and the original terminus was demolished. In one or two examples it didn’t happen with the original terminus instead being given over to other uses. This can be seen at places like Morecambe and Windsor.

The huge goods yard and engine sheds/sidings at the once fine and mighty Yarmouth Southtown terminus. Reduced from a substantial main line terminus which once had express trains through to London by a choice of routes. It became a mere single track whose somewhat remaining and unforgiving train services trundled their way through apocalyptic scenes. British Railways couldn’t get rid of this line fast enough – and it did so despite huge objections. Source: Twitter

Hunstanton (the main feature in the first part) was shown as one of the most extreme examples of British Railways slash and burn policy. There were many others – Broad Street, Yarmouth Southtown/Beach, Leicester Central, Nottingham Akeman Street (the whole Great Central in fact) the Southern route to Padstow, Mablethorpe, Manchester Central – among many other stations that were soon reduced to the obligatory single track jamboree, before an air of considerable dereliction pervaded and the services completely withdrawn. Following that the stations and vacant railway alignments would be flogged off.

As I have just said, in these examples instead of scrapping the railway service completely what was done was to shift the terminus some way off the original site and then give the intervening space over to yes you’ve guessed it, car parking! Ironically this meant motorists had better access to towns and seaside resorts than the rail travellers themselves!

Who the f**k needs a rail served pier? Force the passengers to walk from the nearest landlubber’s station. Oh yes. Lazy contrived rail passengers indeed! While we are at it let’s give that other station a bit of a downgrade too and at the same time shift it just that little bit further back! Make the passengers sweat…

This is the result….

The rather meagre Balloch station. Its not even ‘Central’ anymore is it? Source: Google Streets

The original station was known as Balloch Central and sited on the other side of the road. It was considerably modernised as part of the Glasgow area’s rail network’s early sixties upgrade.

Balloch Central/Pier stations and the associated railway has so far been the UK’s one and only substantial closure of a 25kv AC electric system & associated stations.

Balloch Central in 1961 just after the line had been electrified. Source: Twitter

A lovely shot of a Class 303 at Balloch Central in July 1966. Source: Pinterest

The station after it had been downgraded to single track. The line to Balloch Pier still existed but would soon be closed. Source: Twitter

As for Balloch Pier? It was given a modernised electric service. And guess what? British Rail closed the station in 1986 – that’s 24 years after its services were electrified.

Class 303 at the pier station in 1963. As this scene shows it retained two platforms – both of which seemed quite well used. Source: Twitter

Balloch Pier in 1973 with a train at platform 1. Source: Twitter

The current successor to both Balloch Pier and Balloch Central. A cheerful single track terminus with rudimentary facilities. Source: Twitter

Why did they move the station southwards? Well, British Railways, knowing how it worked, saw that the level crossing in the town centre wasn’t of much use, thus it concluded the site would be much better becoming a proper road full stop. No need for these infernal trains to be crossing a road of any sort. Again it was the ‘modernisation.’ You see, it wasn’t about the trains but rather giving motorists the best possible freedoms.

I bet British Rail didn’t even reduce the fares one iota when they moved the station southwards!

This once vast station was ‘replaced’ by the next one along the line (Blackpool South.) No surprise that station too got the boot and was reduced from a substantial station to the obligatory bus stop style thingy. The land in between was of course given over to the one important thing the railway authorities just couldn’t get out of their deluded minds – the motor car!

Yes there’s Blackpool North these days and its just been hugely modernised and given the wires. But in a sense Blackpool Central would have done a better job. Still we’re stuck with Blackpool North and at least the town is now building a new section of tramway from Talbot Square to Blackpool North station – which I suppose is some sort of salvation – in a way it too does sort of make up for the mad sixties/seventies rail evisceration polices.

But it still leaves us with that stupid thing at Blackpool South – sort of okay for the Pleasure Beach if one can tolerate the mediocre rail service! In fact its so contrived there’s been suggestions the line should be given over to the town’s tramway system (even a canal waterbus service was tried at one time it seems…) There’s often been talk of extending the trams from Starr Gate and then utilising the route through Lytham St Annes – which means of course means the bit of line to Blackpool South finally gets blasted off into space…

Yikes! At one time a trial waterbus service was attempted in lieu of trains! Source: Twitter

No photos are known to exist of the waterbuses – but somebody managed to draw one of those from memory! Source: Twitter.

Did I forget to talk about Blackpool Central…? Oops, so sorry about that! Here we go!

This is Blackpool Central. Once upon a time it was a big station almost right on the promenade! Source: Twitter

Plenty of trains and the Tower just a short distance away. Source: Twitter

Blackpool Central’s engine sheds and sidings. Source: Twitter (Note: The account has been either suspended or protected thus an archived image is used.)

The station was controversially closed in 1964. However British Railways were confident Blackpool South and Blackpool North would do the job just as well…

(They were totally way off the mark!)

After closure, Central station became a bingo hall. In due course it was demolished and replaced by a police station – now too demolished! Source: Twitter

For a while things moved off to Blackpool Waterloo Road (now known as Blackpool South.) But wasnt for long… 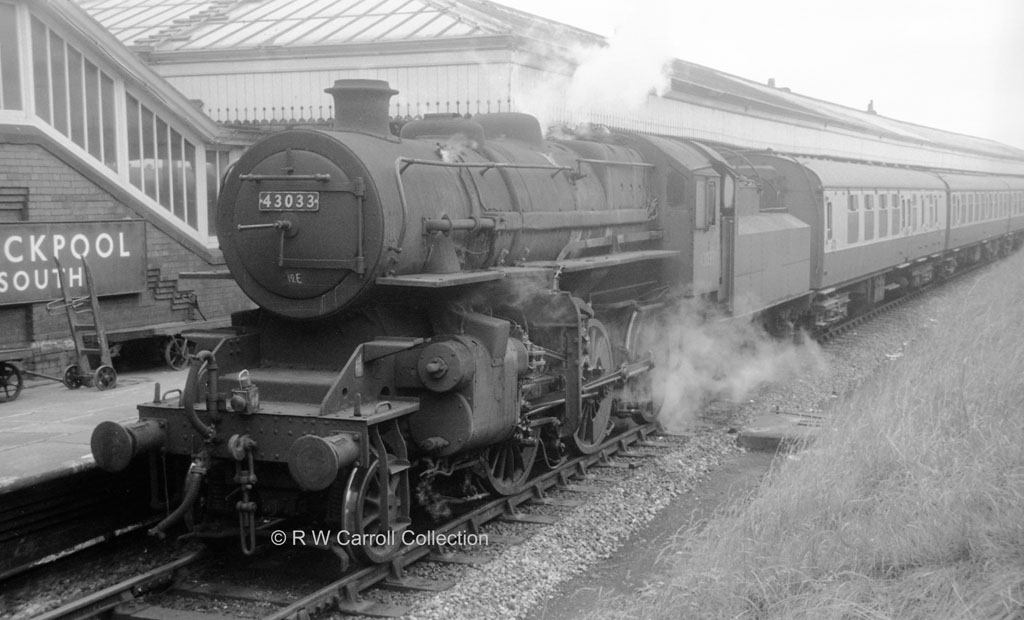 An Ivatt which has just arrived with its train at Blackpool South in 1967. Source: Flickr

Blackpool South on May 3rd 1970. This was the final day of through London services from here. Soon the remaining tracks and loops would be taken out and the station reduced to one platform. The former Preston direct platforms are at right. Source: Twitter (Note: This Twitter account has been deleted thus an archived image is used here.)

Blackpool South on 13 April 1983. Most of the station has been demolished. The former direct line to Preston can be seen curving away to the left in the distance. Source: RMWeb (Note: The post on RMWeb seems to have had the image deleted thus an archived one is used here.)

The entire former rail alignment between Central and South is now one massive car park! British Railway’s Modernisation Plans were ever so successful because the motor car got all the benefit lol!

A once mighty fine rail terminus now relegated to a corner shop thingy nearly half a mile away from its original entrance at the bottom end of a housing estate. Its so weird walking through this estate, one thinks, gosh is there really a railway station down here? There is, but its not what is expected!

It has to be one of the best jokes in terms of our rail system’s modernisation. A fantastic example of the UK’s rail upgrade efforts. Its the perfect image of Britain’s tinpot railways!

The original station entrance was right by the main roadway. Source: Twitter

The next image below in fact looks right at the very spot the above station building once stood!

This quite inconspicuous modern housing estate is in fact the entrance to Epsom Downs station – nearly half a mile walk along the estate’s roads! Shocking when the station once stood right here! Source: Google Streets

What is worse is there’s no signs denoting which road should be taken through the estate. Its a matter of guessing.

Told you it looked like a corner shop in the middle of a housing estate! Source: Google Streets

The railway station with a housing estate on top of it! (That is, if you cant find it!) Welcome to La La Land! Source: Twitter

Twas a once mighty fine terminus! The current station’s sited roughly two hundred yards north of where this photograph is viewed from (the photograph was taken about where this house is!) Source: Twitter

Just for a bit of prosperity – or a laugh maybe! Class 405 driver leans out of his window and changes the headcode on his train at the old Epsom Downs station. Source: Twitter

Beeching, Historical, Operational Issues
railway station
Previous
Next
We use cookies on our website to give you the most relevant experience by remembering your preferences and repeat visits. By clicking “Accept All”, you consent to the use of ALL the cookies. However, you may visit "Cookie Settings" to provide a controlled consent.
Cookie SettingsAccept All
Manage consent