We continue with our investigations into what could be said to be the ‘public sphere’ or perhaps the British consciousness in terms of its railways. The grand modernisation schemes and rationalisations of the sixties and seventies were really nothing more than contrived schemes to give the motorist a better deal. And its how we ended up with tinpot railways. Lines that have little scope for expansion and whose surplus, and evidently now much needed land has been sold off for other uses.

Many railways were closed in those two decades alone, probably more than in the preceding decades. Any railway that didn’t suffer a ‘Hunstanton’ would have been sort of lucky to have festered on a few more years, totally disused, derelict. What this would be doing in fact would be akin to grasping the public consciousness and saying, ‘look, you see this useless little railway station that no-one uses anymore? You got it? Yes its time to buy a car or get the bus. That’s because the railways are not coming back.’

Many railways were in effect left to rot. Lines stretched across the country with derelict, smashed up stations, wagons abandoned on sidings, many lines that still existed in those days in a state of dereliction would now be lines the public and the relevant authorities would be queuing up to have reopened. As a small kid I recall stations such as Peterhead and Fraserborough, Caernarfon and many others which were lively stations with loads of freight and passenger trains. It wasnt long before many lines were simply closed and left derelict. But these were not left as a monument to Britain’s once glorious railway system. Rather it was simply a contrivance. ‘This line is no longer open, it no longer works, its no longer useful – either buy get a car or just get f**king lost.’

Cowes on the Isle of Wight. An indelible impression forced upon locals that trains were just useless. Source: Pinterest

Some might point out to me ‘what about the Island Line? Surely that was saved?’ Yes it was, but few know it wasn’t originally going to be saved. There wasnt going to be a single bit of railway left on the Wight. However the Government came up with this totally hare brained idea the line from Ryde Pier Head to Ryde St. Johns Road should be kept as a electrified shuttle service. This would merely be for the purpose of shifting huge numbers of passengers from the ferries to St Johns Road – where a central bus/coach station would be available to distribute our unfortunate passengers by road to the rest of the island.

It is only by quirk of fate the line to Shanklin was saved. That only because the Government, having purchased in 1965 a batch of ex 1924/27 tube stock for their glorified shuttle service, soon discovered a whole batch of the same type of tube stock could be purchased at nominal scrap value. It meant the line southwards from Ryde St. Johns Road was upgraded as part of a low-cost add-on package, and that is how we got the Island Line.

Felixstowe is one of those numerous sea side resort termini that deems its much better for passengers to walk an extra few hundred yards. The intervening space in between the current station and the original is of course given over to car parking – which means the motorists get to be nearer town!

One oddity in terms of Felixstowe was it had such long platforms the current odd bit of station in fact uses a bit of the original platform at its far end!

There was a period when no-one could decide whether the main Felixstowe station was more important than the other, Felixstowe Beach, so they closed the former and made the latter, even further away from the town, the main station. But few were happy. Thus the town section was restored, albeit somewhat truncated…

The old Felixstowe Town station in 1981. Clearly on its last legs thanks to British Rail’s deconstruct, dereliction and destroy policy. Source: Pinterest

There have been recent attempts to welcome passengers to Morecambe. The passnegers’ faces must be crestfallen upon learning they’ve been bamboozled into paying for a rail journey. That is because they’ve been left with a long walk to the seafront. Its clear motorists have far better access – and what’s worse is the rail passengers then discover just how right on the seafront the original station had been!

I remember this particular example because at the time I was doing a rail tour of the UK with a nationwide pass. I had expected to arrive at Morecambe Promenade station – but discovered much to my chagrin I ended up at what was essentially an unfinished shithole a good distance to the south west of the original site – the former route from there towards the original terminus was still very plain to see.

The end of the line in the bay platform at Morecambe. Its at least 400 yards to the original terminus! Source: Twitter

Morcambe station has a weird arrangement. Most trains use a bay platform. There’s a ‘main platform’ but its only for the occasional train to Heysham. What is so contrived about it is these trains require special dispensation and operating procedure just to get to the main platform and then reverse to gain the line to Heysham. Some of our rail planners certainly had their heads screwed on the wrong way – and it shows!

The new station with its sign and ticket hall at left. And on the right in the distance are the chimneys and roof of the original Morecambe station! Source: Google Streets

The original Morecambe terminus on the seafront itself. The current station’s way back further than the roller coaster seen in the distance. Source: Twitter

Another case of ‘let’s make the bloody passengers walk.’

Dont worry – the motorist at least gets a nice new prime parking spot!

About the same exact location today (evidenced by the houses above at left.) Source: Google Streets

The replacement St. Ives station was placed where a siding veered off to the south of the station itself. This enabled the entire station site to be released for the judicious use of car parking.

The present station in a corner of the car park (which passengers must walk through, thankfully!) The location of the first two photographs was taken about where the bottom left hand corner of the above photograph is. Source: Twitter

The really big station that was once fit for a Queen! This is the second ‘Royal’ route we have featured the first was Hunstanton. Windsor and Eton Central (as the name implies) was slap bang right in the town centre. Today its a single track route that utilises a spare platform at the far country end of the station. The whole site’s been given over to tourism, shops, cafes, museums and the likes – and the railway hardly gets a look in.

It was once a grand double track route from Slough (as I remember clearly) with double track spurs from both the Paddington and Reading directions. This allowed direct rail services to the town from east or west. There was even a underground service at one time from London to Windsor!

The former western spur to Windsor left the main line at this point. The land is now housing. Author’s collection.

The alignment at the far end of this road was where trains once traversed their way from the Reading direction onto the Windsor branch. Source: Google Streets.

Ooh look! The Windsor branch is electrified! No it isn’t. Its only wired to the first bridge. Even if it was wired all the way to Winsdor it would be an anti climax. Author’s collection.

How the entrance looked in the old days. Source: Twitter

The station in September 1977. Notice how the space has been given over to cars! Source: Wikipedia 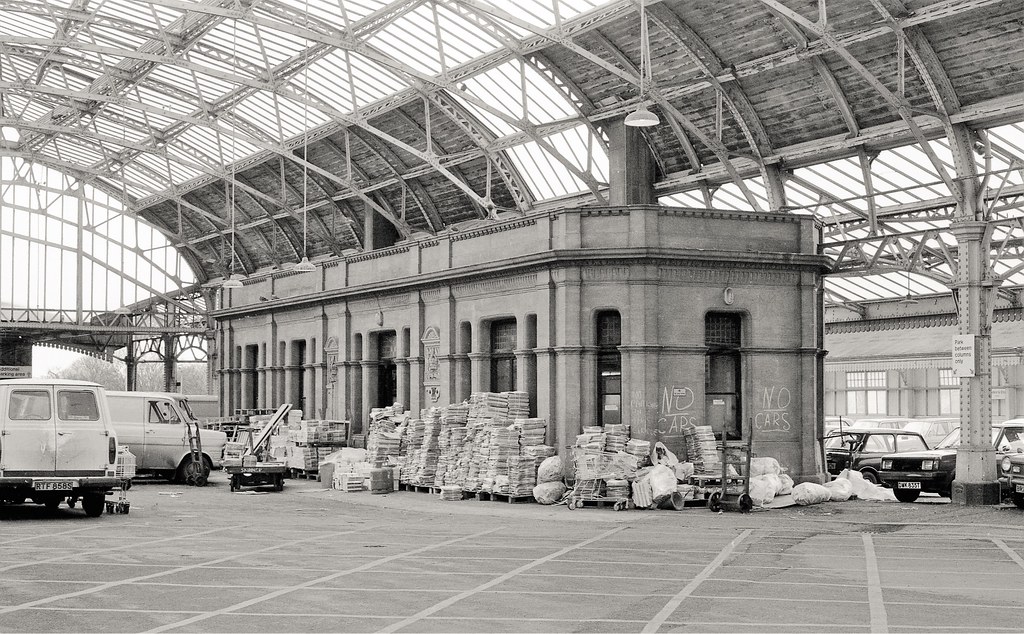 A down at heel station in January 1980. Source: Flickr

Yes I know there’s a replica steam train to illustrate the station’s Royal connection. Its trying to tell people this was a once grand station, but its a sort of contrived way of going about it! It seems to me the replica locomotive has never really fitted in. And there’s a reason why! The following picture shows how it once looked: 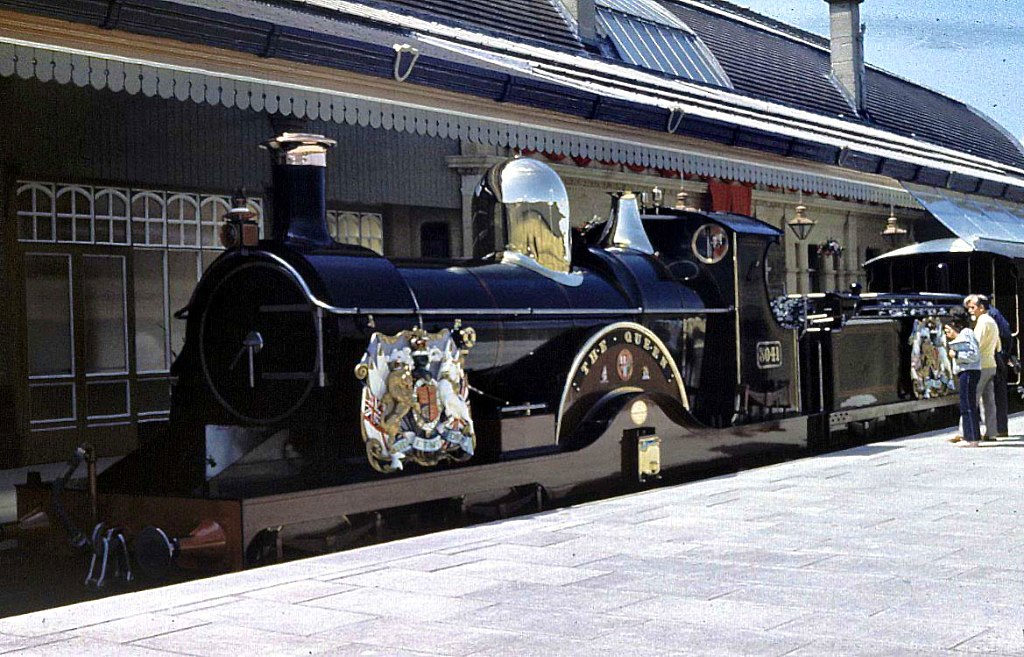 The locomotive ‘The Queen’ came complete with a tender (a real one not a replica) and a proper train – and was established in at least what was a historic setting (even if it wasn’t perfect.) However the exhibition this was part of closed. It was found the locomotive was too heavy to remove. The historic tender was scrapped and the locomotive was ignominiously left to sit on its own as an oddity in the former station. Another example of bastardising our railways and even their precious history! Source: Flickr

This You Tube video filmed in 1994 shows how the Royal Train once looked in its station setting.

The rather motley terminus – which isn’t even ‘central’ anymore! Its why they call it plain Windsor these days! Source: Google Streets

One aspect of the Windsor branch is that its obvious trains and leisure could mix. Thus there could be a proper shopping centre, museums, arts or community centre whatever and all could exist happily together. This could have happened at other places such as Balloch, Blackpool Central/South, Felixstowe, St. Ives, Morecambe. But no, the railway was not wanted. Instead of being able to make an important contribution to the community the railway has been sidelined. And that’s why Britain has tinpot railways!

There’s many other examples of stations that have been sidelined – these include Colne, Looe, Merthyr Tydfil, North Berwick, Redditch, Sheringham, Uckfield.

Beeching, Historical, Operational Issues
railway station
Previous
Next
We use cookies on our website to give you the most relevant experience by remembering your preferences and repeat visits. By clicking “Accept All”, you consent to the use of ALL the cookies. However, you may visit "Cookie Settings" to provide a controlled consent.
Cookie SettingsAccept All
Manage consent