In the canton of Fribourg, the TPF (previously known as the GFM) has a long metre gauge route (as well as two standard gauge lines) that make up the authority’s diverse transportation offerings, which include trolleybuses. Enhancements have been made to almost all of the company’s lines, including the standard gauge, and some of these upgrades have been cross-overs between the two systems. Bulle, where the two systems can be seen side by side, has seen massive development to establish a new station that’s fully accessible, as well as the standard gauge receiving new additional track as part of the Romont line’s upgrade.

In addition, the standard gauge is assuming control of the ‘Chocolate train’ line to Broc. In a way this is disappointing because it means the metre gauge ‘Chocolate’ trains will no longer run from Montreux or Zweisimmen to the famous Nestlé factory at Broc. However it does mean through trains from other parts of Switzerland may be possible, though these would have to be multiple units.

The old order at the FTP is clearly disappearing fast. Once the new station at Bulle is open the TPF’s rail network will be barely recognisable – even on the narrow gauge. In many ways it will no longer even be the historic GFM/La Gruyère system!

The modifications are among the most significant ever made to a Swiss metre gauge system in the twenty-first century. Other lines, too, have received upgrades and new tunnels. For example, the Furka Oberalp (Matterhorn Gotthard Bahn as it is now) abandoned its traditional route over the Furka Pass in favour of a new base tunnel that allows it to operate all year – and one that was borne out of necessity because the railway would not have such a bright future ahead. Not to mention the Rhaetian which has also invested heavily in modernization, particularly with its Vereina tunnel – Europe’s longest narrow gauge tunnel – which offers new route combinations and options as well as road transport shuttles. Bear in mind the MGB and RB, as well as the Bernina when combined, is a vast narrow gauge system!

TPF Map: This shows the TPF metre gauge lines (S50 and S51) from Montbovon through Bulle and Châtel-St-Denis to Palézieux. The RE lines are its standard gauge routes to Romont, Fribourg and Morat (and northward to Neuchatel.) S4 is the SBB route from Bern to Lausanne. S60 is the line to Broc-Fabrique (not currently in use as undergoing modernisation and will become part of the RE lines.) The route from Montreux through Montbovon to Château-d’Oex is the Montreux-Oberland Bernois line. The total length of the modernised Montbovon to Palezieux route is 42km. The diagram is adapted from the TPF’s Regional map.

In comparison to the MGB and RhB, the TPF isn’t precisely a massive system but when combined with the MOB, it forms a reasonably considerable narrow gauge system. Although certain parts of the route are rather quiet in terms of passenger demand, key stations are being upgraded or replaced entirely. The TPF has made it obvious that they wish to move their rail system into the twenty-first century. One of the most significant changes, and one rail advocates are concerned about is the complete removal of freight. Focusing on a passenger-only railway however makes sense because it opens up possibilities for boosting service frequencies.

Passengers are of course the TPF’s most important customer on its railways, as well as the rest of its transportation system. Undoubtedly the former GFM/La Gruyère network will be barely distinguishable after the present upgrades are completed and new connections established to the rest of the Swiss rail network. As the FTP has said, ‘We are going to open up Gruyère to the rest of Switzerland.’ 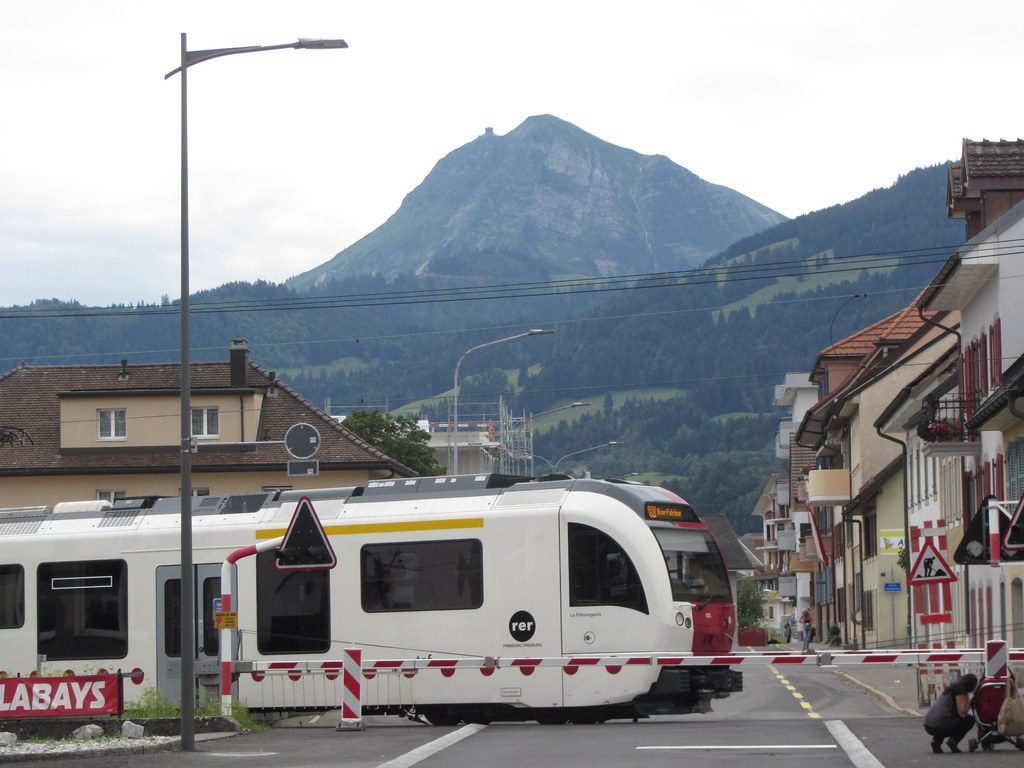 The old order at Bulle. This train for Broc-Fabrique (seen in 2016) is metre gauge but the future trains to that destination will be standard gauge. However metre gauge stock will still use the Rue Saint-Denis crossing in Bulle on Montobovon services. Source: Flickr

One interesting aspect to the work being undertaken is there will be mixed gauge track east of Bulle as far as the junction with the Broc line, and that will entail a situation that had never occurred before – both metre gauge and standard gauge trains will use a mixed gauge section for around 700 metres (just over half a mile) to the east of Bulle before diverging their separate ways. More of that later.

But first, there’s no shortage of upgrades on the major TPF metre gauge track between Montbovon and Palézieux. The TPF has made significant improvements to its system, including the reconstruction of a number of stations and track alignments, with the most prominent work taking place in the Bulle and Châtel-St-Denis districts. In the case of the latter, trains had to do a reverse on their way to or from Palézieux. Because the Vevey – Les Pelaides line used to continue south to St-Légier, it was trains from St-Légier rather that used to run straight through to Palézieux! Instead of upgrading the old station a modern one on a new and more direct alignment was the preferred option. The sale of the old site will of course help pay for the modernisation.

Some of the historic GFM stock can be seen in the Châtel-St-Denis depot now relocated to Montbovon. Source: Geste

The old GFM Historique depot at Châtel-St-Denis. The building is now relocated at Montbovon. Source: Facebook

One result of the changes at Châtel-St-Denis was the historic rail stock stored there (the GFM museum transport collection) would no longer be accessible by rail thus it was decided to move the entire collection to Montbovon, including the depot building itself! Prior to the depot being dismantled the historic stock had to be moved to other locations temporarily. The moves took place over a number of days in early March 2019 to place the stock in the now relocated depot at Montbovon.

The GFM Historique move is important in the context of the work to divert the line onto a new alignment. On the plus side, the former GFM depot at Montbovon has been remodelled, providing more space than before for storing vintage rolling stock as well as maintenance and restoration work. Another advantage is the GFM Historique now has direct access to the MOB, as well as the possibility to conduct heritage operations with the nearby historic metre gauge line from Blonay to Chamby.

In very simple terms the new chord removes the necessity to reverse trains and also makes redundant two road crossings. It saves quite a few minutes on the transit time between Bulle and Palézieux. As part of the work the local river has been reinvigorated and an newly important ecological area has been established.

Map showing the remodelling at Châtel-St-Denis. The red dashed lines is the former route. As the map shows this reversal also included two road crossings. With the new alignment (in solid red) both crossings have now been eliminated. Source: La Gruyère.

The ceremony at the old Châtel-St-Denis to inaugurate the remodelling scheme. 2017. Source: Twitter

Taking up the tracks! Commemorative ceremony to mark the start of the 60 million Swiss Franc project to build a new line and station at Châtel-St-Denis. Source: Twitter

Another view of the ceremony to mark the start of the project at Châtel-St-Denis. Source: Facebook

Here’s a statement from TPF which explains the Châtel-St-Denis scheme:

The TPF and the cantonal authorities inaugurated the new station at Châtel-St-Denis (FR). The project, spread over three years, represents an investment of around 60 million francs. The important event for the district of Veveyse in the south of Friborg, was held in the presence of Vincent Ducrot, Director General of TPF, who recalled the challenges for the canton. The inauguration took place in the presence of State Councillors Georges Godel, in charge of the Finance Department (DFIN), and Jean-François Steiert, in charge of the Planning, Environment and constructions (DAEC), as well as the Trustee of Châtel-St-Denis, Damien Colliard. In addition to the new station, the stations of Remaufens, Bossonnens and Palézieux (VD) have been renovated, seeing their platforms lengthened. The work in Châtel-St-Denis focuses on moving the station and building a new cantonal road, revitalizing the Tatrel stream and creating a greenway. The project has been concieved by the TPF, the municipality and the DAEC. It is an essential part of the development of the RER in the south of the canton, the speakers reminded the officials and the population. The new station and the new railway line allow the introduction of a half-hourly frequency between Bulle and Palézieux, saving three minutes. Source: TPF

As mentioned in the above statement the work here also entails the remodelling of a fair bit of the town centre in order to improve the roads system too and remove the road crossings in the town. One downside of this work was a chalet (pictured at right) had to be demolished in order to construct the new Route de Palézieux. Google Streets

The beginnings of the new station at Châtel-St-Denis. At right and heading into the distance is the line to Palézieux and bottom is that to Bulle. Source: Twitter

The new arrangement at Châtel-St-Denis. Formerly trains had to head over the level crossing (bottom of picture) to the old station before reversing and taking the now redundant track to the left towards Palézieux. The junction between the two routes can clearly be seen. The new station forms a chord which takes the line directly to the Palézieux route at left. Source: MGI-Ingenieurs

The original line from Châtel-St-Denis to Palézieux with the then uncompleted new station straight ahead. November 2019. Source: Facebook.

The new viaduct over the diverted Route de Palézieux. This new road has ensured the road crossings over the railway could be eliminated completely. Source CIA Châtel-St-Denis

The new station was finished by the winter of 2019. Originally it was planned to open it at the end of November 2019 but it was a month later in fact.

Advertisement for the new Châtel-St-Denis station opening & half-hourly services from Bulle to Palézieux.

A modern station for Châtel-St-Denis – soon to become part of a larger development for the locality. Source: CGN02

How the station will eventually look with new apartments, shops and leisure retail. Screencap from Youtube

The new station is fully accessible with lifts to both platforms. It will form part of a brand new development that will place the station at its centre. There will be new flats, apartments, a square and public piazzas. Its expected the work will not be fully realised for a decade or more. The total cost of the whole scheme is expected at 254.6 million Swiss francs with the main contributors being TPF, the Municipality of Châtel-St-Denis and the State of Fribourg. The sale of the old station site will no doubt contribute towards the total cost of the new. Sadly the old station will make way for another development.

Here’s a PDF summarising the project.

Europe, Narrow Gauge
railway
Previous
Next
We use cookies on our website to give you the most relevant experience by remembering your preferences and repeat visits. By clicking “Accept All”, you consent to the use of ALL the cookies. However, you may visit "Cookie Settings" to provide a controlled consent.
Cookie SettingsAccept All
Manage consent