William and his wife Nellie at Clacton in 1963.

Some of my inspiration for the tube came from William Mitchell. He was a tube Signal Engineer who worked for the London Transport Executive/London Transport Board. William & his wife knew my family and he introduced me to the London Underground rail system at an early age, hence the origins of my interest in the tube. He was very knowledgeable about the tube system.

William Mitchell (Bill) originally hailed from Dover, and married Eleanor (Nellie), a Londoner born in Gee Street, EC1. They married at what is now the Joseph Grimaldi church (this was once the old St James’s Chapel) on Pentonville Road.

Bill worked on the underground system as a signal engineer mostly on the Piccadilly and Northern Lines maintaining their signalling systems during the night-time shut down. Most of the work was done north of the river, eg stations en route to Wood Green (many once having a signalling cabin) Arnos Grove, Cockfosters, High Barnet, Edgware etc.

We went on a number of comprehensive tours of the system, and I clearly remember the clerestory roof tube stock, both sub surface and deep level stock. Aldwych was a particular favourite as it was part of Bill’s work territory and there was plenty of time for him to chat with the staff and train drivers as there was no rush of any sort to be had at Aldwych station. There was also the one time we got off the tube at King’s Cross Midland which wasn’t something normal at the time but it was certainly possible! That was very easily because the tube platforms remained in place and one was able to exit the station via the normal stairs shared with the Midland/Eastern main line services.

William and Eleanor lived at Derby Lodge in Britannia Street. The old flat is no longer there. The original units were somewhat small. Camden council remodelled the block by merging a number of units hence each floor gained fewer, but larger, flats. Anyway in the older days great views of London could be had from the western extremity of the rooftop at Derby Lodge. I certainly remember construction progress on the Telecom Tower in the early sixties as we could watch it slowly being built up to its full height. There was also a grandstand view of the tube trains making their way in the cuttings towards Swinton Street. There were the steam freight trains on the underground too, some of which I remember passing through King’s Cross Met/Circle station. Not forgetting that in the late fifties/early 1960s we too could use London’s trolleybus system, which as I remember ran along Gray’s Inn Road and past St. Pancras station. More reason to have an interest in London’s transport system! 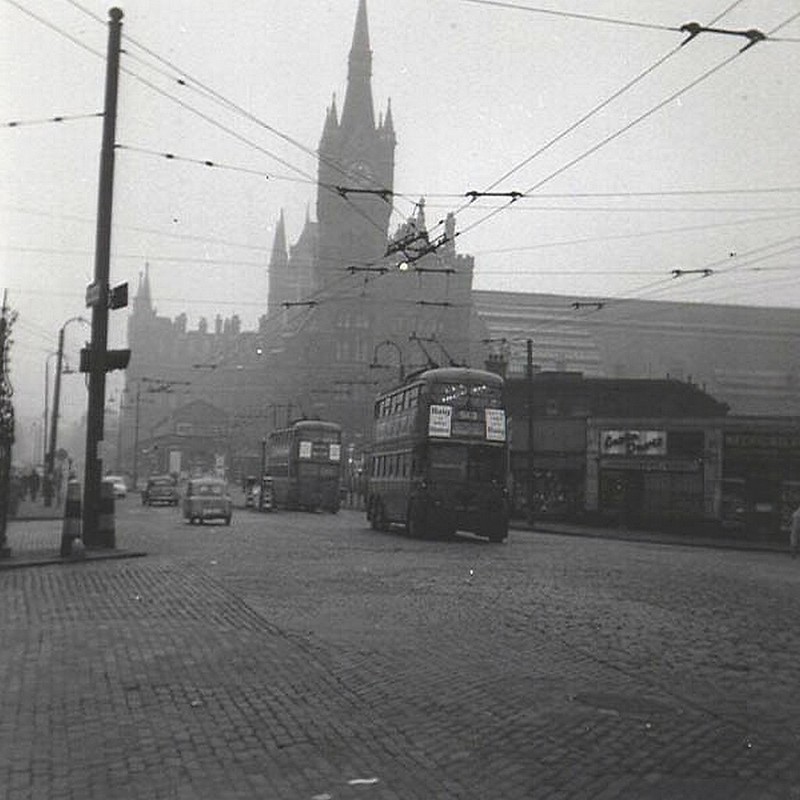 How I remember it! Trolleybuses at King’s Cross (with St. Pancras behind.) The trolleybus nearest (on the 543 route) is about to take the turning into Gray’s Inn Road en route to Holborn Circus – which will take it past Britannia Street.

William died around early 1968 in University College Hospital not long after an emergency operation. There was one daughter, Barbara, who emigrated to Canada in the mid sixties and married Stewart, one of a fairly large number of farmers of the same family of Bosomworth from the area around Carstairs and Banff.

Historical, London transport
transport, underground railway
Previous
Next
We use cookies on our website to give you the most relevant experience by remembering your preferences and repeat visits. By clicking “Accept All”, you consent to the use of ALL the cookies. However, you may visit "Cookie Settings" to provide a controlled consent.
Cookie SettingsAccept All
Manage consent