A tribute to the closed railway tunnel and its EM2 locomotives. The tunnel was the UK’s longest landward example built in the 20th Century. Two major collapses caused huge delays in construction. Total cost was £4.3 million. It opened over a year late in 1954 as part of Britain’s first ever electrified main line by the Minister of Transport. The new tunnel replaced the Victorian ones which ran parallel. Sadly the Woodhead route closed in 1981. The tunnels are now used for the National Grid.

Commemorative plaque on the opening of the tunnel. Unveiled by Transport Minister Alan Lennox-Boyd on 3rd June 1954. Thats sixty five years ago this week. Source: Twitter

The official opening plaque is nowadays found on the wall of Hadfield station, several miles from its original position. It was indeed located at the west portal of Woodhead Tunnel but moved to Hadfield sometime in the 1980s after the line had closed.

Woodhead Tunnel was 3 miles 66 yards and by decree of its length became the third longest in the country. Contracts let out 1949 with Balfour taking a large part of the contract. The tunnel was completed October 1953 and officially opened on 3 June 1954. 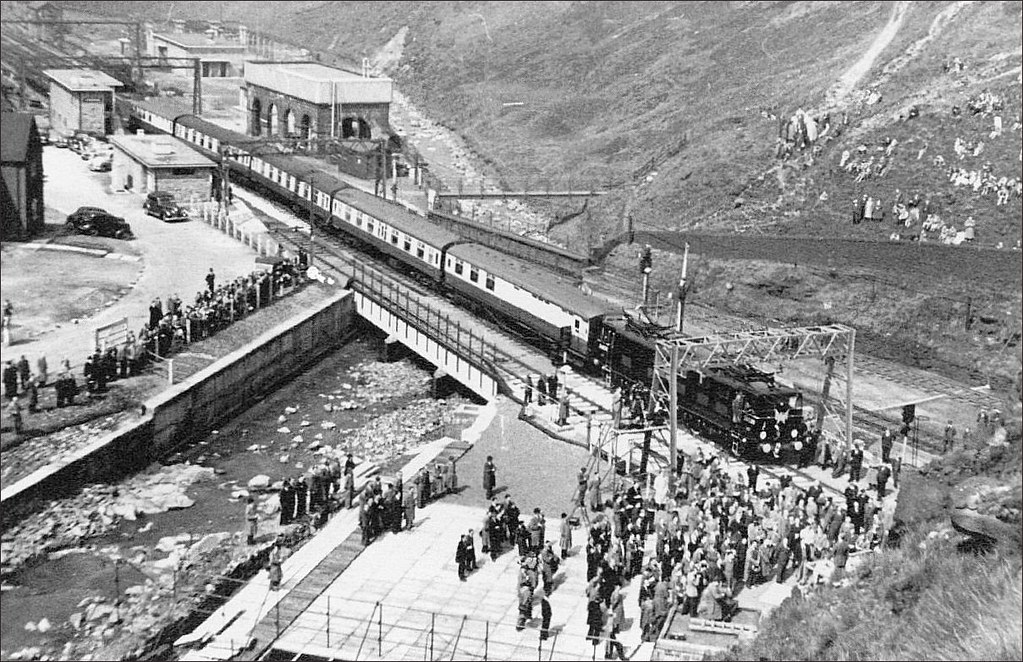 Photos of the tunnel opening in 1954 are rare however here’s one. The locomotive was 27000. Source: Flickr

The plaque seen on the tunnel portal after the opening ceremony. The image was linked to the Sheffield Star however no page can now be found thus the image from the Internet Archive is used here.

The stone plaque above the tunnel entrance. ‘B.R. 1954.’ Source: Twitter

Full electric services began between Manchester, Penistone and Wath for the freight trains in June 1954. However passenger services did not begin until September 1954 when the wires through to Sheffield Victoria had been completed.

The new through service from Sheffield to Manchester was finally inaugurated in September 1954, using the same locomotive 27000. Source: Twitter

Some might claim there were other lines electrified on the overhead before Woodhead. Certainly yes, but these were suburban lines, such as Victoria to Coulsdon/Sutton, Lancaster – Morecambe/Heysham, Liverpool Street – Shenfield and of course Manchester – Altrincham. The Woodhead route is acknowledged as the first such scheme to be completed for a main line.

Sadly the Woodhead line had a very short shelf-life and despite protests, interventions from MPs, local councils and huge opposition from the unions, British Rail, true to its word, shut the famous trans-Pennine line for good. In the period before it’s closure I was fortunate to ride a special railtour on the Woodhead route, known as the Great Central Wanderer. More of that later.

Much of the former Great Central route is now a public footpath, and people are still able to enjoy the views in the Longendale valley as if they had been on a train. One of the tunnels, Thurgoland, is now a pedestrian and cycling tunnel.

A short clip from a You Tube video covering the opening of the Woodhead line services in 1954. You Tube

Nice black & white film showing the Woodhead Line, the building of the new tunnels, the new services in 1955 etc. You Tube

Although most sources suggest the Woodhead plans were first mooted in the 1930s, they were in fact put forward just before the first world war. By the 1920s (after the chaos of the 1923 grouping had abated) plans emerged for a comprehensive Manchester-Sheffield electrification scheme. Ultimately some sections were left out of the original plans.

The reason for the Woodhead project was the single bore tunnels underneath the Pennines. These presented numerous problems and were seen as a bottleneck, as well as being quite injurious to health because there was poor ventilation. Electrification would enable trains to speed through these tunnels faster as well as resolve the issues of proper ventilation.

Originally a total of 181 steam locomotives were provided for the Woodhead route. The LNER estimated they could do the job with 88 electric locomotives instead. There would be nine express locomotives, 69 mixed traffic and 10 banking engines.

In fact work on the Woodhead route began in 1937. One of the earliest signs was the first prototype electric locomotive. It was eventually known as Tommy.

Work was also undertaken over a distance of seven miles to build the cantenary needed for the project, although it seems the masts were not wired. I am not sure if these early masts were used for the post war electrification or not.

A flyover at Darnall was built to allow electric locomotives to pass from one line to the other en route from the depot there and that would facilitate an easier switch of locomotives from steam to electric for the run onwards to Manchester. The flyover had been completed by the summer of 1939. Other sources suggest it was the 1940s however the Machester Guardian for 24th August 1939 confirms this and several other elements including the locomotive sheds and also confirms this early erection of the cantenary system.

As time went on there were various mishaps, accidents, and even rockfalls in the old Woodhead tunnels. Their age plus the various mishaps ultimately urged the LNER to rethink its plans and it was decided a new tunnel was the way forward.

The entire project as it came to be was officially launched in November 1936 by the LNER and known as the Manchester-Sheffield-Wath (MSW) electrification scheme. This came complete with new marshalling yards and other facilities.

An electrified circular line was proposed from Fairfield via Levenshulme to Manchester Central as well as that to London Road. The plans were eventually dropped and this loop was wired only as far as Reddish. In the other direction the wires would extend beyond Darnall as far as the tunnels. Other than that Wath, Glossop and short sections off the main line at Guide Bridge and Dunkenfield would be wired. It was eventually wired to Rotherwood sidings. Surprisingly Tinsley was not in the original plans.

The second world war put a stop to progress. Ultimately it was British Railways who completed the project. Sadly the MSW electrification ended up having a quite short shelf life – although with effort British Railways could have made it viable and it would these days be a very important trans Pennine railway route.

Aerial view of the tunnel workings at Woodhead in 1952. The new tunnel portal can easily be seen. Source: Twitter

The first part of the newly electrified line began operation on 2nd February 1952 between Wath, Penistone, and in due course Dunford Bridge. Trains under 750 tons were allowed a single engine up the banks, those over had to have a banker. After full operation began in 1954/55 trains generally had a pair of engines anyway, with the heavier ones still requiring banking assistance.

The construction of the new tunnel was not without its problems. A substantial section collapsed in June 1951. It took six months to clear. A further major fall sited 900 feet from the western portal crushed the steel ribs erected in readiness for the tunnel’s lining.

The new Woodhead tunnel soon after opening in 1954. The old tunnels can clearly be seen. Source: Twitter

A report I have from 1973 details the lack of work for the line (interesting as it was originally it was ‘saved’ by Beeching because of expectations it would be able to carry more freight.) Wath and Mottram Yards had become less used and although the merry go rounds were still a substantial traffic on the Woodhead route these block trains did not need the marshalling yards specially built for the MSW. It is recorded Tinsley Yard (at that time) had barely any work.

Skirting the reservoirs in Longendale, April 1981. There was once four tracks, BR whittled it down to three, two, one, and then none. Source: Twitter

It was accepted the 1500dc system was antiquated, especially as so soon after the MSW had been opened that the Lancaster-Heysham line had been converted to 25KV AC and this became the new standard for Britain’s railways. It meant BR was absolutely resolute and insisted Woodhead had to go.

BR said that sending trains via Woodhead was a totally inefficient operation. It also claimed the Woodhead line was not worth modernising in any way or form and that the Diggle route between Manchester and Sheffield was a better option. Ironically the Diggle route is at capacity now, it hasn’t even been electrified – and there are NO alternatives!

The impending closure of the line caused the visit of many enthusiasts’ trains, all wanting to sample this famous line before it shut for good. There were many enthusiast and special trains up and down the line and eventually BR put a stop to these! Representations made to the BR Chairman of the time Sir Peter Parker eventually got the embargo on specials lifted.

Until recently there was considerable hope the Woodhead route could be reopened. However National Grid have now moved all their electrical cabling and equipment from the old tunnels into the new tunnel. As well as that they have laid a road through the railway tunnel itself to provide easier access to its equipment. This pretty well means there is no hope now for a reinvigorated rail route through the Pennines.

Historical
Previous
Next
We use cookies on our website to give you the most relevant experience by remembering your preferences and repeat visits. By clicking “Accept All”, you consent to the use of ALL the cookies. However, you may visit "Cookie Settings" to provide a controlled consent.
Cookie SettingsAccept All
Manage consent