Part two of a special feature on the EM2s (Class 77) from the Woodhead line. These venerated OHLE express locomotives were made redundant much earlier than the EM1s (Class 76s) however a number of the EM2s were sold by British Railways to the Netherlands where they had a couple of decades extra work, classed as NS1500 and found mainly on express services between the Hook of Holland and Venlo.

This second part looks at the Woodhead line after closure and the EM2s’ new role in Holland.

Pictures of the line at Woodhead – when it was in operation.

The tunnel in its last months. The 1954 plaque can still be seen on the left side of the portal. Source: Twitter

The platforms at Woodhead and the tunnel entrance as seen today. Source: Twitter

13th May 1986. The connection between east and west side trackage is severed inside the Woodhead tunnel. Source: Twitter

As the track is severed in the tunnel, the inevitable writing appears on the wall… Source: Twitter

The last lot of track being lifted progressively westwards from Woodhead. May 1987. Source: Twitter

As I very briefly noted, the railtour I took through Woodhead was the Great Central Wanderer. 76001 was used on the eastbound trip. What follows is some of my pics of the trip through Woodhead. These were pulled off slides thus the quality is a little poor.

Another of my views – by Valehouse reservoir in the Longendale valley en route to Torside and Woodhead.

I particularly liked the run through Longendale past the reservoirs. It was a dull sort of day but enough to be able to see the impressive scenery as 76001 hauled our train up the long 1 in 100 and 1 in 117 gradients to Woodhead.

Passing through Woodhead station on the same railtour (from Flickr.)

Snap! My photo of our train Entering the Woodhead tunnel.

The Woodhead tunnel was stupendous. Clean, brightly lit throughout. It wasn’t vast like some of the Victorian tunnels, Kilsby for example, but it had a good height. A far cry from the many other dark and dank tunnels on our railway system.

The train emerging from the portal at Dunford Bridge.

Dunford Bridge station, like Woodhead station too, still existed although it was no longer in use. Interestingly these were the only two modern stations on the Woodhead route and they were built by necessity of having to divert the railway through the new tunnel.

In the last few months of the line’s existence British Railways apparently tried to prevent further enthusiasts specials through Woodhead. They felt too much attention was being drawn towards the route. British Railways claimed it was due to delicate negotiations with the unions. The LCGB was informed it couldn’t run a charter through Woodhead even though their railtour had been agreed by BR several months earlier. In the event the tour went ahead as did others after protestations were made to Sir Peter Parker, then BR chairman.

As for the locomotives built for the Woodhead line, the ones specially built for passenger trains were exported to Holland in 1969 and became NS 1500’s – where they spent sixteen years on various lines throughout the country. These were the only times I ever travelled behind an EM2! I used the Rotterdam-Dordrecht-Tilburg-Eindhoven-Venlo route, which was worked almost entirely by the EM2s. From notes on my trips in the Netherlands, one example was the Loreli (Loreley) Express for Venice from the Hook on 1st April 1972. With an unspecified NS1500 in charge, it departed the Hook at 07.28am. Rotterdam 07.55am, Dordrecht pass, Tilburg 08.45am, Eindhoven 09.10am and arrived at Venlo 09.45am. The NS1500 was switched rapidly for a DB locomotive before continuing onwards into Germany where I changed to another express at Mönchengladbach.

The prototype EM1 poses for the camera in this publicity shot 1947. Source: Pinterest

The prototype locomotive, 6701 (classed EM1 and later named Tommy) was designed by Sir Nigel Gresley and built by the LNER in 1941, but languished in the sheds because testing was limited to the short section of 1500dc line then available on the Manchester-Altrincham line.

In 1946 it was renumbered 6000, and a year later sent to Holland because their system was too electrified at 1500 volts dc – a perfect testing ground – also the Dutch were short of electric locomotives at the time. Despite initial problems the locomotive was soon found quite favourable there. Tommy spent three years on the Dutch rail system before returning to the UK in 1952.

Tommy being put on the ferry at Harwich in 1947 en route to Holland. Source: Twitter

The first EM2s had the opportunity to be trialled on the new Liverpool-Shenfield suburban electrification system but were moved to Wath as soon as that part of the MSW scheme had become live. The Dutch’s prior experience with EM1 Tommy easily explains why the Dutch were quite keen to buy up the seven EM2s when these came up for sale in 1969.

The EM2s were generally stabled at Maastricht, however I expect the reason the EM2s stayed on the Hague/Hoek van Holland-Venlo route was because Tilburg locomotive works (closed 2013) originally overhauled and modified the locomotives for Dutch operation, thus Tilburg had specific knowledge in terms of maintenance and specialist repairs for these locomotives.

A very smart 1501 in Holland, still with its ‘Diana’ nameplates – and much better cared for than BR! Location is Utrecht CS. Source: Spoorweg Materieel

One of the most obvious aspects of the NS1500s was the difference in size (loading gauge) between the continental railways and the UK railways could be seen. The difference between NS1501 and the carriage behind it are all to clear.

The NS1500s were very well cared for, much better than any locomotives ever were on BR!

Clearly 1501 was the most popularly photographed locomotive. Here it is at the Tilburg railway works (probably after retirement) in 1986. Source: Flickr

Just for prosperity, here’s a fab shot of NS1503 at Venlo – with its fantastic semaphore signals – both upper and lower quadrant! Source: Flickr

The EM2s worked until 1986 when Nederlandse Spoorwegen organised a grand finale.

EM2/NS1500 line up at Boxtel Yard (just off their regular stamping ground at Tilburg) during the finale celebrations in 1986. Source: Flickr

Although the EM2s ended their service in 1986, three were preserved. Two are in Britain and one of these, Electra, returned to Holland in 1989 where it joined its preserved Netherlands counterpart, Diana, for a series of NS 150th anniversary specials. 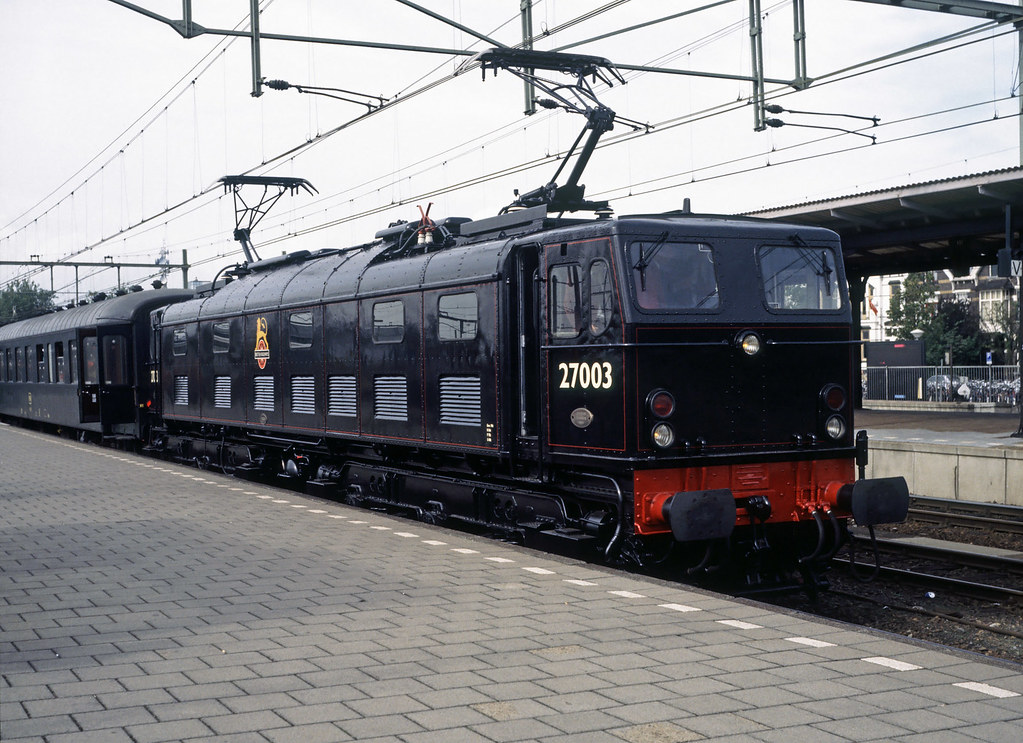 NS1501 was repainted into BR Black during 1996 and seen at Hoek van Holland during a special railtour in September of that year. Source: Flickr

A great source of information and pictures on the Woodhead route: @WoodheadRoute

Historical
Previous
Next
We use cookies on our website to give you the most relevant experience by remembering your preferences and repeat visits. By clicking “Accept All”, you consent to the use of ALL the cookies. However, you may visit "Cookie Settings" to provide a controlled consent.
Cookie SettingsAccept All
Manage consent